Ramming Speed on Boston DIY and a Successful Move South

If you measure a band’s success by record releases, world tours, and beers consumed, look no further: Ramming Speed is your pick for a new king. The quintet formed in 2007 and after many lineup changes, shitty jobs and destroyed practice spaces, things started to look up: they were signed to Prosthetic Records in February of 2013, debuted their full-length “Doomed To Destroy, Destined To Die” in June 2013, and shacked up in an Allston loft (named Uncle Crummy’s) to host shows and live their lives as gods amongst party rockers.

Then, the party stopped rocking. Boston Police Department’s District 14 started paying more attention to the ‘DIY’ scene of Boston and Uncle Crummy’s head was put to the proverbial chopping block. Left with nothing more than a sour taste for Boston and a dying DIY scene, the group journeyed southward to Richmond, Virginia. Despite all the setbacks, they still aim to be the unstoppable punks that they were destined to be.

It has been a full year since the band has been in Boston, and America’s sweatiest sweethearts found themselves inside a secret Allston loft once again – but this time to film their first ever music video.

It has been a long, long time since I last saw you guys. Last time you played in Allston was at your loft, correct?

We were *supposed* to play our loft spot, Uncle Crummy’s, but the show got shut down before we had a chance.

If I recall that didn’t end too well…

At the time, we didn’t realize the Allston/Brighton police department had been monitoring us as part of a ‘sting’ operation. I actually have paperwork somewhere that talks about “operation party time.” I couldn’t even make this shit up! They rolled in with like 10 undercover vice officers and a paddy wagon and found a bunch of adults standing around drinking Narragansetts at 8:30 on a weeknight. They were being like “where’s the COCAINE guys!?”, all excited about their big bust. Sorry boys, more wasted resources in a city that is over run with college bros puking and fighting in the streets. 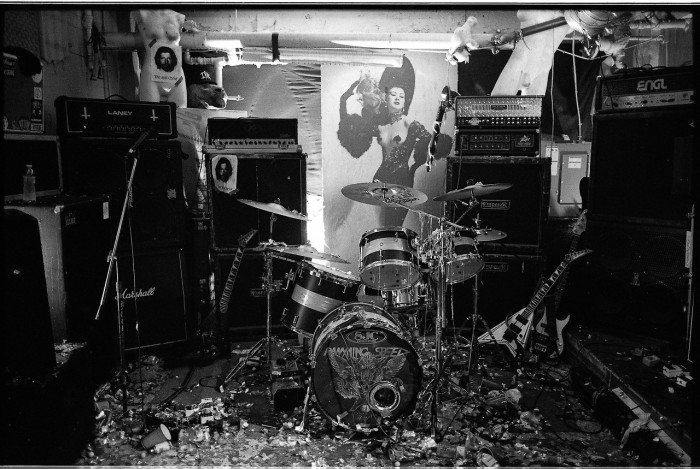 Did the dying DIY scene of Boston have any influence on you fellas to move to Richmond, or was that a plan already in the works?

We had been planning on moving already, but all that bullshit definitely expedited the need to get out. There’s still a DIY scene in Boston, but the last couple of years have been at the lowest point as long as I can remember. There’s always going to be great bands from Boston no matter what, it’s a resilient town constantly fed with new musicians. Unfortunately, the police and landlords have been successful in stomping out most of the creative spaces and discouraging a lot of people from opening new ones. I spent ten years booking, running and playing DIY shows in the city, trying to build something awesome that’s open to everyone, and seeing such a crack-down proves that it just isn’t a city for young people. It’s really disappointing.

How is day-to-day life in Richmond compared to Boston?

The biggest difference with life in Richmond is the nature aspect of the city. A ten minute walk from my house and I’m swimming in the James River, or getting lost in the woods or chilling on a cliff over the train tracks. People from all ages and walks of life head to the river every day to relax and be outside.  The Charles will always be special for me, but along the James River you can BBQ, drink beer, swim, and no one bothers you. It’s a way more relaxed city in general and the heavy music scene is probably the best in the country. A lot of people talk about how it’s a playground for heavy metal man-children here. I’m sure it’s a big shock that we fit right in.

Glad to hear everything’s going well! So tell us about putting together the “Anthems of Despair” video — a whole lot of work was put into it. Silly string, confetti, crowd surfing…

We have been struggling to figure out a concept and a director for almost a year now. My old friend Mike Simpson, a lifer metal punk scumlord from Philly started working at Troma and posting some of his projects online. Without a budget to pull off anything complicated I figured I’d just throw a DIY show in Boston and have Mike film it. No costume changes or acting or any of that shit: just play a greasy banger and try and capture why it matters so much to us. John Nunn helped co-direct. John used to book shows at this house in Philly. He straight up got stabbed in the back during a show and after going to the hospital they re-named the spot the “Stabbin’ Cabin” and kept doing shows. It was important to have people that understood the basement scene making the video and these dudes fit the bill perfectly. As for all the silly shit – I envisioned a more serious, sweaty, brutal live set, but my buddy Scott who does special effects on big Hollywood movies showed up with a duffel bag full of bouncy balls, popsicles and a confetti cannon. He had his own vision for the video and it’s definitely going to look completely insane. 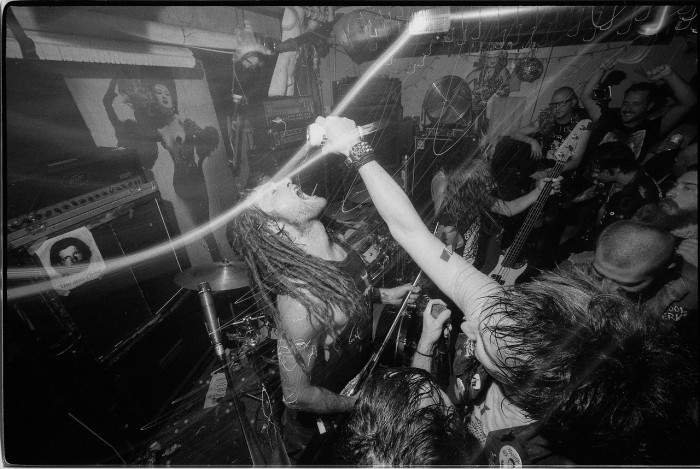 You put out “Doomed To Destroy, Destined to Die” on Prosthetic Records almost a full year ago. Now that you came, saw and conquered, what else is on the horizon for Ramming Speed? I know you guys are aching to go back to Europe and tour…

We’re more than halfway done with writing for our third LP and are tentatively heading back to the studio around Christmas to get that recorded. The riffs Pete, Kallen and Blake have been coming up with are more brutal than ever, but they manage to twist them around these catchy guitar leads and d-beats. I’m wildly stoked to see what people think. It’s been four years since we’ve been to Europe so that’s also definitely on all of our minds.

Any last little tidbits? I’m sure you guys wanna get back to driving home.

We just finished up a quick tour with Madball, Municipal Waste and Suburban Scum, so shout outs to all those dudes. Keep an eye out for information on the new record and thanks in advance to Prosthetic Records for throwing more time and money at a bunch of dirtball longhairs trying to live the dream. Thanks so much for everyone that came to the video and shot silly string and poured beer on us. We’ll see you next time Boston!

Enter to win tickets to see Trio Da Kali at The Villa Victoria Center of the Arts (Newton, MA) on April 10th. END_OF_DOCUMENT_TOKEN_TO_BE_REPLACED

END_OF_DOCUMENT_TOKEN_TO_BE_REPLACED

Enter to win tickets to Rhye at The Paradise on February 28th. END_OF_DOCUMENT_TOKEN_TO_BE_REPLACED

Her new album has been pushed back, but we have Kimbra’s new single for you. END_OF_DOCUMENT_TOKEN_TO_BE_REPLACED

The folk duo returns with a new record this week. END_OF_DOCUMENT_TOKEN_TO_BE_REPLACED

Now that we’re done looking back at 2017, let’s look ahead at 2018. END_OF_DOCUMENT_TOKEN_TO_BE_REPLACED

Our first Song of the Week for 2018. END_OF_DOCUMENT_TOKEN_TO_BE_REPLACED

In a year when so many things were off, the music was right on. END_OF_DOCUMENT_TOKEN_TO_BE_REPLACED