Point/Counterpoint: Are Mosh Pits Good Fun or Too Dangerous? 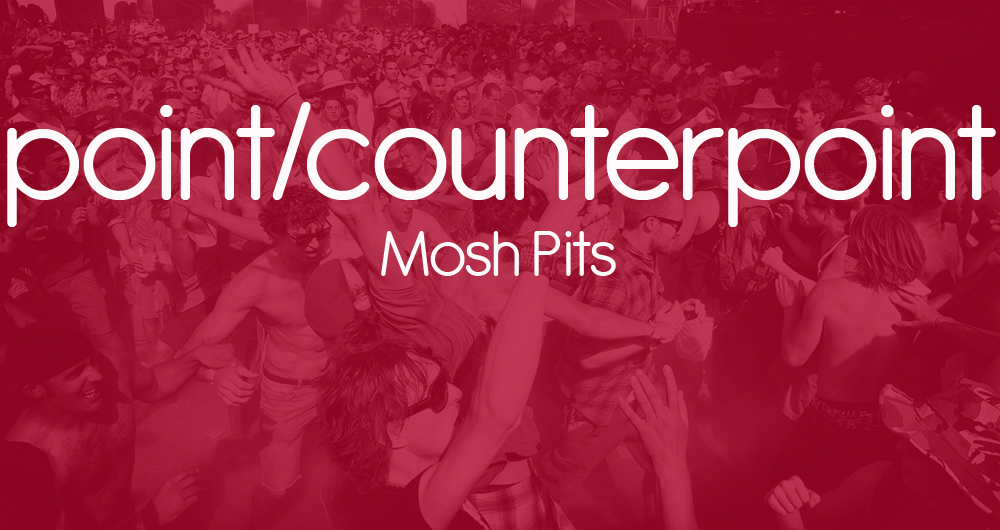 Point/Counterpoint is a recurring feature on BDCwire that explores the pros and cons of various parts of life in Boston. These arguments may, or may not, break any new ground, but are meant as a starting point for you too to make an argument. What do you think? Is moshing a joyous thing, or should people at shows scale it back a bit?

I don’t know what ever happened to the art of actually dancing, or even just bobbing along to live music, but can we bring it back please? Between all of the hitting, pushing, and sweating, mosh pits are not only dangerous, but they are pretty disgusting, too. Those who engage in hardcore moshing don’t give a damn about who they step on or shove out of the way; their only goal is to get to the front of the crowd. That in itself puts concertgoers at a disadvantage. See, there’s a little thing called Pitriarchy. You know, like when all the macho bro-hardcore dudes get all violent in the front and everybody else has to listen from the back with poor viewpoints. Sure, people of all shapes and sizes are welcome to join in the pit, but violence aside, it’s pretty unwelcoming knowing that crowdsurfers can be subject to sexual assault as well. Mosh pits turn concerts into a battlefield. With all of the thrashing and crashing, you’re lucky if you can stay vertical let alone enjoy the music. There is nothing more disappointing than paying to see your favorite artist perform, only to be surrounded by Axe-bathed hooligans who showed up just to cause a ruckus. These people have no boundaries, no respect, and no appreciation for the music. Mosh pits also put you at risk for losing your valuables; if you drop your cell phone, wallet, or anything else you tend to keep in your pocket or purse, you may never see it again. And if you do manage to find missing items once the scene has cleared out, they’ll likely be trampled, broken, and soaked in other people’s bodily fluids-just like you.

Since punk music has been around, there’s been a need for mosh pits. When you go to a show with such frenetic power, how else are you supposed to dance? I’ve heard numbers of people argue that moshing is “too intense” and “too scary.” First of all, what do these mosh-haters want us to do? Just stand still at shows? Secondly, I’d argue that most of those people have probably never been in a mosh pit themselves. Although the point of pits is to through your body against other people, moshers by nature are extremely supportive. Those who are versed in the ways of the pit know that it is proper etiquette to help up anyone who has fallen and to keep your elbows down. You know which people aren’t nice? The ones who don’t mosh but sit at the edge of the circle and push other people in. Or the people who are “too cool” at shows and just stand there, giving the band no motivation to play the best show they can. Sorry that I like to have fun, but the next time I’m at a pop punk show and a band sings that one lyric that I identify with on a spiritual level, I’m going to jump in the pit, throw my body against a bunch of dudes covered in sweat and beer, and sing my heart out. Lastly, hardcore pits can be intense, I understand, but those are a bit of a different breed. The fun ones are when you bob around in harmony with people who love the band as much as you do.

Enter to win tickets to see Trio Da Kali at The Villa Victoria Center of the Arts (Newton, MA) on April 10th. END_OF_DOCUMENT_TOKEN_TO_BE_REPLACED

END_OF_DOCUMENT_TOKEN_TO_BE_REPLACED

Enter to win tickets to Rhye at The Paradise on February 28th. END_OF_DOCUMENT_TOKEN_TO_BE_REPLACED

Her new album has been pushed back, but we have Kimbra’s new single for you. END_OF_DOCUMENT_TOKEN_TO_BE_REPLACED

The folk duo returns with a new record this week. END_OF_DOCUMENT_TOKEN_TO_BE_REPLACED

Now that we’re done looking back at 2017, let’s look ahead at 2018. END_OF_DOCUMENT_TOKEN_TO_BE_REPLACED

Our first Song of the Week for 2018. END_OF_DOCUMENT_TOKEN_TO_BE_REPLACED

In a year when so many things were off, the music was right on. END_OF_DOCUMENT_TOKEN_TO_BE_REPLACED