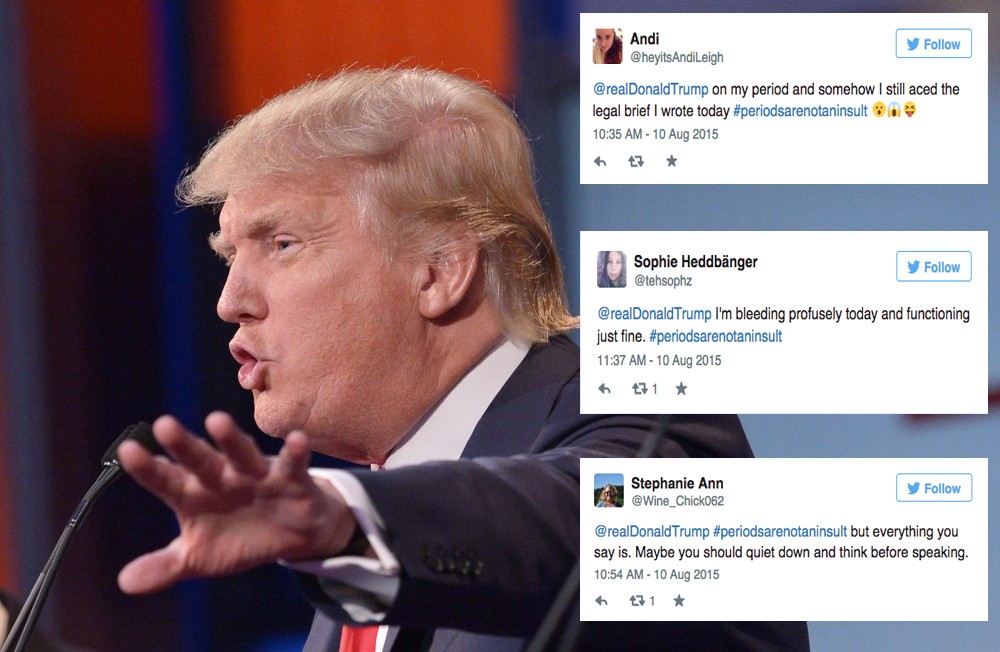 Twitter users have taken Republican presidential candidate Donald Trump’s most recent disparaging remark about women and are using it to prove a powerful—and positive—point about menstruation. (Pun intended.)

Following last Thursday’s GOP debate, Donald Trump told CNN anchor Don Lemon that FOX debate moderator Megyn Kelly unfairly targeted him with questions such as the one for which she brought up the fact that he’s called women “fat pigs, dogs, and slobs” in the past.

(For the record: Part of his response to Kelly’s question about his treatment of women was that he’s only called Rosie O’Donnell those names.)

Trump has claimed that he wasn’t implying anything about menstruation and stands by his statement.

But, for many, the damage was already done.

Using the hashtag #PeriodsAreNotAnInsult, women (and some men, too) have taken to Twitter to proudly declare that having a period does not fundamentally alter who women are and what they’re capable of.

@realDonaldTrump did you know your daughter gets periods and STILL ODDLY ENOUGH LIVES NORMALLY EVERYDAY????? #periodsarenotaninsult

@realDonaldTrump #periodsarenotaninsult but everything you say is. Maybe you should quiet down and think before speaking.

In fact, periods have been a source of pride in more ways than one this week. Kiran Gandhi, a Harvard Business School grad, is going viral after participating in the London Marathon last month without a tampon to raise awareness about period-shaming and lack of access to feminine hygiene products in impoverished regions of the world.

Moral of the story: A period is not an insult. Period.

@realDonaldTrump I'm on my period, you're not, yet I'm not the one being a whiny bitch. #periodsarenotaninsult