Peggy Hubbard is a grandmother and former Navy officer who grew up in St. Louis and now lives in Illinois. She recorded a video reaction to deaths within the St. Louis black community and posted it to Facebook Friday.

The video, which Hubbard captioned, “From my heart!” has since gone viral.

On Wednesday afternoon, an 18-year-old black man was killed while St. Louis police officers executed a search warrant. According to the St. Louis Post-Dispatch, the police say they fired in self-defense; an investigation is underway. The night before, a 9-year-old black girl was killed in Ferguson while she sat and did homework on her mother’s bed. Someone opened fire into the home.

Hubbard referenced both of these deaths at the beginning of her Facebook video. “Last night, who do you think they protested for?” she asked. “The thug. The criminal. Because they’re hollering ‘police brutality.’ Are you [expletive] kidding me? Police brutality? How about black brutality? You black people—my black people—you are the [expletive] most violent [expletive] I have ever seen in my life. A little girl is dead. You say black lives matter? Her life mattered.”

She explained that she has a son who’s in jail. “I got a kid locked up. Oh, yeah. I put him there. I turned his [expletive] in. … I told my children, ‘If you [expletive] up, if you go to jail, I am not getting you out.'”

As of August 24, the video had garnered more than 7.2 million views and 1,600 comments on Hubbard’s Facebook page alone.

Hubbard has since followed up with responses to reactions she’s received, as well as clarification on comments she shared in the video, such as when she said, “White people don’t care.” 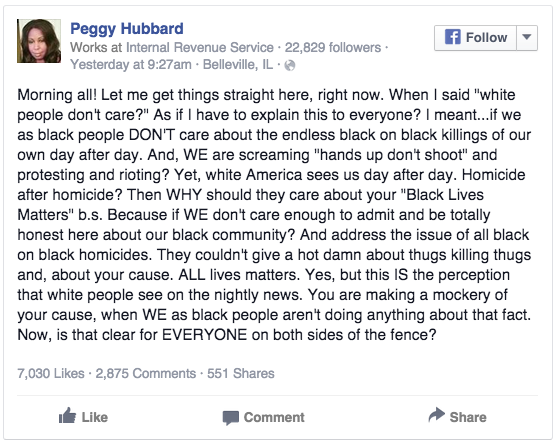 She also posted another video on Saturday, this one 15 minutes long, in which she first apologized for her mature language in her previous video before sharing additional thoughts on racial tension in America today.