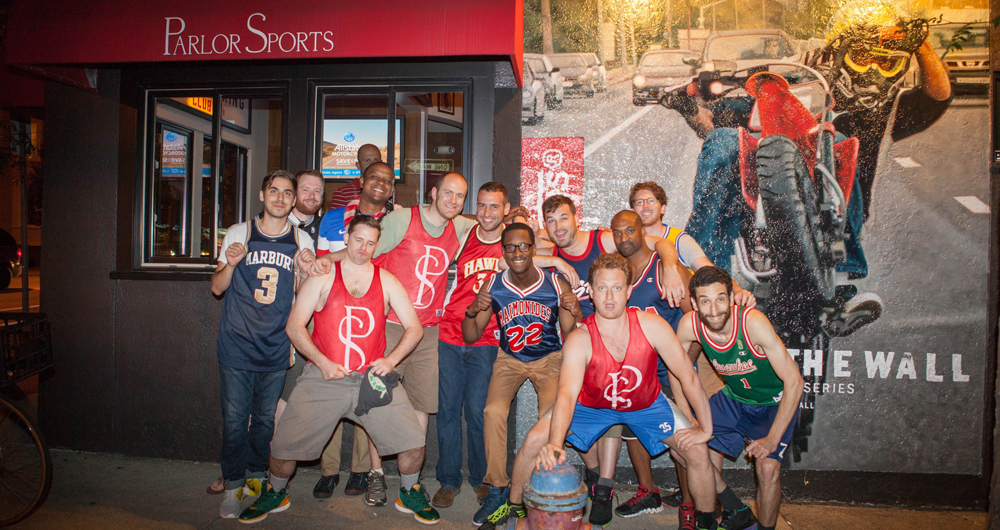 Somerville has developed a reputation as a hipster haven. Sure, you can find your microbreweries and your restaurants creating decadent meals using only local ingredients but there is one such gem in Somerville that makes itself unique in a world that hipsters aren’t usually associated with: sports.

Nestled on the corner of Beacon and Dickinson streets, Somerville’s Parlor Sports has become the go-to destination for the sports obsessed intelligentsia of greater Boston. Parlor is classified as the sports bar version of Trina’s Starlite Lounge, the service industry favorite next door. What makes Parlor most unique is the type of sports fan it attracts.

Like most sports bars, NFL Sundays and major sporting events are typically packed, but Parlor also hosts a Saturday morning Soccer Nerd Brunch for soccer obsessed fans to bond over their love for the game. The staple of the bar’s themed happenings, however, is the weekly Wednesday NBA Nerd Night.

Don’t envision a gaggle of glass wearing, calculator punching NBA fans at Nerd Night– instead, you will find a community rich in knowledge that comes from a diversity of genders, ethnicities, occupations and experiences.

“At Nerd Night, we appreciate basketball for its aesthetic side, its technical side as well as its emotional side,” says Harvard PhD candidate Ernest Hartwell. “It is a place where I can just enjoy the game with a group of slightly-off, yet quite well-informed friends.”

Hartwell isn’t being casual by calling his fellow Nerd Night-ers “friends.” There is a community environment that allows for good natured ribbing and overblown boasts. ESPN The Magazine’s Senior Editor Jason Schwartz (a frequent Nerd Night-er who recently moved away from the area) concurred, “I just thought it was awesome to have a place to go on Wednesday nights, watch basketball and argue about all the stupid basketball crap I love to argue about with a bunch of people who loved arguing about the same exact crap. I honestly didn’t really know anybody when I started coming, but felt like I was friends with a bunch of people by the time I left town. It sounds cheesy, but it is a great community.”

The creation of a community was one of the driving forces behind establishing NBA Nerd Night at Parlor. With the help of Grantland’s Kirk Goldsberry, head bartender Garvey Salomon established the night two years ago in an effort to unite smart NBA fans that were seeking a common place to rave about the uniqueness of the league.

“Nerd Night started during the 2012 NBA Draft,” Salomon recalled. “I was working the bar. Kirk, Brendan McGuirk and myself, got into a debate about the (Boston) Celtics’ draft picks, Jared Sullinger and Fab Melo. We ended up talking for hours about basketball in general. We all kind of collectively said we should have a night where we can all just talk shit, but not in typical sports bar or barbershop fashion.”

Brendan McGuirk, a Boston Herald editor, added, “We realized that Wednesday was the day with the most games, and it went from there.”

The actual physical size of Parlor has also helped build the NBA Nerd Night community, as it can only fit slightly more than 40 people at a time. Couple the tight knit quarters with the 10 flat screens that are perfectly placed throughout the establishment and there are always multiple NBA games on within a small swivel of one’s head.

Somehow, the smallness of the space and the close-knit nature of the NBA Nerd Night community, manages to not deter anyone from joining the group. “Nerd Night is not ‘Fight Club’…it is not exclusive. It is inclusive,” said Salomon. “The thing that brings us all together is just an appreciation of the great game of basketball.”

“We don’t all just love the NBA, we are addicted to it,” McGuirk expressed. “Parlor becomes this fantastic enabler and pusher of our habit.”

This appreciation appears even when it is in a contrarian’s view from the rest of the group as Harvard PhD candidate Samuel Stolper explained, “For game seven of the 2013 NBA Finals, the great majority of Parlor was rooting against the (Miami) Heat. When LeBron hit a jumper to secure victory with 30 seconds left, the air went out of the room. There was much sighing, heckling and booing. In the midst of this, McGuirk drunkenly paced the aisle yelling ‘You’re in the presence of greatness! Don’t hang your heads at greatness!’”

“He must’ve seen a heavenly light or something, because he definitely was doing his best St. John the Baptist impression. The Parlor crowd was not impressed. “

“Everyone was pissed at me, but whatever, [screw] ’em,” said McGuirk. “I go to Nerd Night because, in a place where everyone’s an asshole with an opinion, nobody needs to feel badly about it.”

This is exactly what Salomon envisioned when the night started, “NBA Nerd night falls in line with how I feel about sports. At the most fundamental level, sports brings people together. That’s what I wanted NBA Nerd Night to do. Just bring people together. It is enabling me and others to make new friends and build all types of relationships. I love that I am helping cultivate that here through a league that I love.”

SB Nation’s Paul Flannery agrees with this sentiment. He wrote last year about NBA Nerd Night, “It’s there that I’ve met attorneys, academics and teachers from all over the city. Women and men from all walks of life and backgrounds who are united solely by their devotion to the sport and the promise of a safe haven to talk usage rates and knock back a couple of High Lifes. People I never would have met otherwise have become fast friends, united by a common language that runs deeper than post-ups and isolations.”

These relationships have evolved past the bar as well. The NBA Nerd Night community spawned a recreational basketball team that plays in a local league. As Hartwell put it, “We made an awesome basketball team out of the nerds who got together weekly to drink beer and troll each other. That is special.” The team represents Parlor Sports to the fullest by playing under the moniker and wearing custom monogrammed Parlor red jerseys that the bar sponsored.

“Nerd Night further amplifies what we are trying to do here at Parlor,” said Salomon. “We are building a community.”

END_OF_DOCUMENT_TOKEN_TO_BE_REPLACED

Enter to win a pair of tickets to attend The Hess Collection Seminar and Dinner as part of Boston Wine Festival 2018 at the Boston Harbor Hotel on Wednesday, March 14th. END_OF_DOCUMENT_TOKEN_TO_BE_REPLACED

The Black and Gold continue their run tonight at TD Garden. END_OF_DOCUMENT_TOKEN_TO_BE_REPLACED

Who will make the Class of 2018? END_OF_DOCUMENT_TOKEN_TO_BE_REPLACED

It’s been awhile since we talked Black and Gold. END_OF_DOCUMENT_TOKEN_TO_BE_REPLACED

You’re going to wish you were in the Northern Alps. END_OF_DOCUMENT_TOKEN_TO_BE_REPLACED