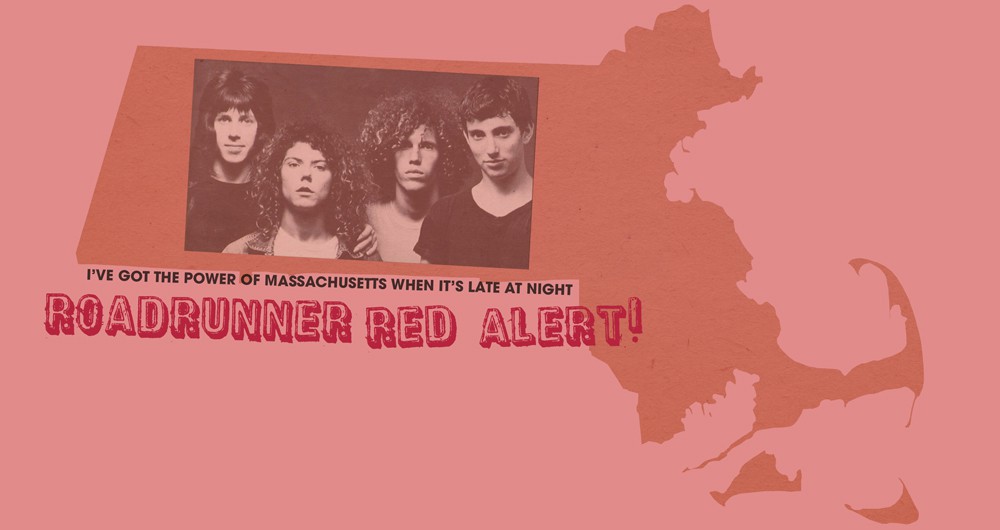 Do you know what the Massachusetts State song is? I didn’t, until today.

It’s called “All Hail to Massachusetts” and it’s, by any measure of a song, not good. Arthur J. Marsh, its author, lived in Wellesley. That’s the total extant of information you’ll be able to find of Mr. Marsh who, no offense, wrote a generic appeal to a vague sense of patriotism which became our state song in 1966. One lyric goes like this: “the home of the bean and the cod.” How beloved is this song? You’ll find exactly one recorded version of the tune online which Youtube user Wilbur1256 was apparently forced to learn and record as part of a “school project.”

If you’re a music loving resident of the state, you may already be aware that in February 2013, Bill H.3573 was presented to a Massachusetts legislative committee to make “Roadrunner” by The Modern Lovers the official state rock song. Rolling Stone has listed it as #274 on its countdown of the 500 Greatest Songs of All Time, but you don’t need the perennial glossy-mag’s endorsement to understand why it’s great: you just need ears. Laura Barton, writing about “Roadrunner” in The Guardian, called it “one of the most magical songs in existence” while former MA resident, Daily Show correspondent, and comedian John Hodgman expanded on that concept, proclaiming, “It connects the midnight ride of Paul Revere with the dream of every Massachusetts teenager who has just gotten their license and is discovering the Freedom Trail that is Route 128 after the last movie lets out.”

The bill initially generated heaps of enthusiasm and momentum from the press and voters, but that momentum was stalled when Duxbury Democrat Rep. Josh Cutler and Marshfield Democrat Rep. James Cantwell initiated a motion to make Aerosmith’s “Dream On” the official Massachusetts state rock song, citing sheer album sales as a primary reason. “With all due respect, Aerosmith is the best-selling American rock band of all time” Cantwell declared, “No band is more closely associated with Massachusetts.” It occurs to me, that if we officially endorsed everything from MA that sold enormous quantities or was closely associated with the Commonwealth, we might end up with a state flag depicting Whitey Bulger throwing handfuls of Oxycontin into the air, which I’d certainly like to take a look at, but will by no means salute.

When I recently checked in with Joyce Linehan, chief of policy for the city of Boston and an early promoter of the bill, about the current status H.3573, she explained the ticking clock situation “Roadrunner” now faces:

The current legislative session ends next week, just before the new legislators are sworn in on Wednesday. This means that if Roadrunner isn’t acted on Monday or Tuesday, the current bill (H.3573) expires with the session. I don’t have any intention of asking for it to be refiled for the next session (though that doesn’t mean someone else won’t). The bill could be passed in informal session on Monday or Tuesday. It’s Speaker DeLeo’s decision about whether that happens. I am going to call the Speaker’s office on Monday morning and ask about it again. I would imagine other citizens will do the same. If the Speaker decides to let it be considered, and it passes, the Governor would have to sign it. I’ve been working on him for quite some time, and am confident that he would sign. I’d be thrilled to see it happen. It has been a fun project, and a great lesson for a lot of people about how government works. Radio on!

There’s a reason, I’d argue, that the public movement behind “Roadrunner” becoming Massachusetts’ state rock song simply won’t quit, and that Aerosmith’s “Dream On” supporters quickly grew quiet: lyrically, “Dream On” is a truly hopeless track that tells the listener that their great achievements only await them in dreams; Steven Tyler’s lyrics instruct listeners that the best case scenario is “maybe tomorrow, the good Lord will take you away.” That’s correct, “Dream On” peddles a world view that suggests that this life sucks, but the afterlife is going to be great. In this way, “Dream On” is inherently a rejection of the plain reality in front of us. It cannot be a state rock song, for it only wishes to die and leave this corporeal plane. How on earth Cutler and Cantwell listened to the track and thought, “Yeah, this is what it’s like to live here” boggles the mind.

In contrast, “Roadrunner” is an in-the-moment celebration of humans in motion, of the unifying power of shared experiences via the radio, and, of course, of the state of Massachusetts. “Roadrunner” loves the state’s highways, its weather, its music, its people and even its commerce options (shout-out to Stop & Shop, yo). It has infinitely more to do with what it means to be a proud Massachusetts resident than “Dream On” or even the well meaning but milquetoast “All Hail to Massachusetts.” Even songwriter Jonathan Richman’s protest that the song is not good enough to be the state rock song is all the more reason to endorse it. Richman’s humility about its quality somehow elevates the magical properties of the two-chord rave-up and illuminates its worthiness even more so.

“Roadrunner” has one final chance that lies within the boundaries of today (Monday, January 5) and tomorrow. Speaker DeLeo’s information, including his office telephone number, is listed on this state run webpage. If you believe that a state rock song should contain a tangible adoration for the place it’s about, and an encapsulation of the indomitable spirit of the human soul, you may already be on the phone right this instant.

Enter to win tickets to see Trio Da Kali at The Villa Victoria Center of the Arts (Newton, MA) on April 10th. END_OF_DOCUMENT_TOKEN_TO_BE_REPLACED

END_OF_DOCUMENT_TOKEN_TO_BE_REPLACED

Enter to win tickets to Rhye at The Paradise on February 28th. END_OF_DOCUMENT_TOKEN_TO_BE_REPLACED

Enter to win a pair of tickets to attend The Hess Collection Seminar and Dinner as part of Boston Wine Festival 2018 at the Boston Harbor Hotel on Wednesday, March 14th. END_OF_DOCUMENT_TOKEN_TO_BE_REPLACED

Her new album has been pushed back, but we have Kimbra’s new single for you. END_OF_DOCUMENT_TOKEN_TO_BE_REPLACED

The folk duo returns with a new record this week. END_OF_DOCUMENT_TOKEN_TO_BE_REPLACED

Now that we’re done looking back at 2017, let’s look ahead at 2018. END_OF_DOCUMENT_TOKEN_TO_BE_REPLACED

Our first Song of the Week for 2018. END_OF_DOCUMENT_TOKEN_TO_BE_REPLACED