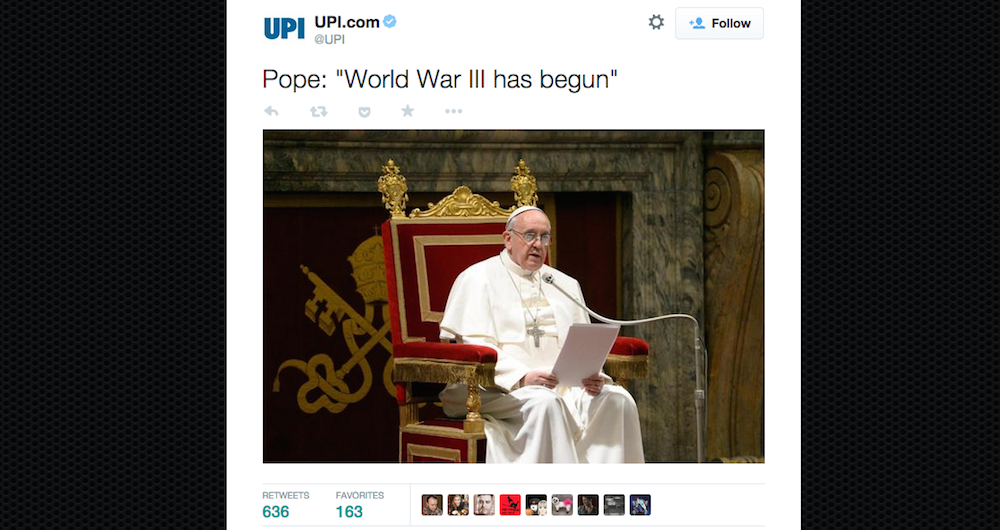 Early this afternoon, the Twitter account for the New York Post and United Press International were hacked, sending out messages about banks failing, China firing missiles at U.S. ships, and the Pope declaring the onset of World War III. 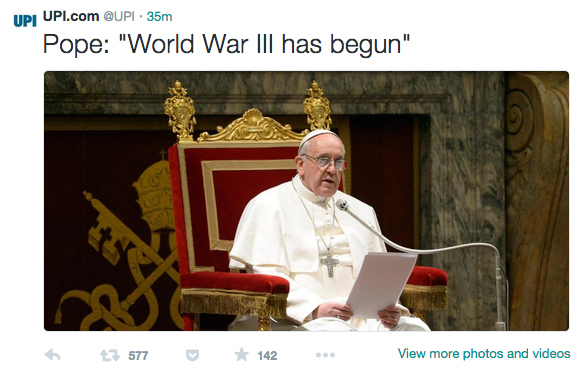 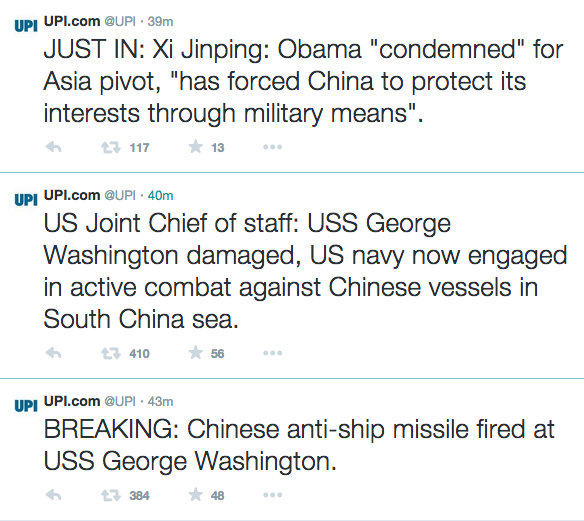 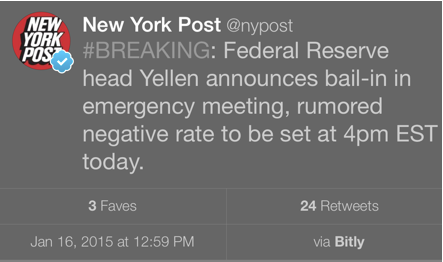 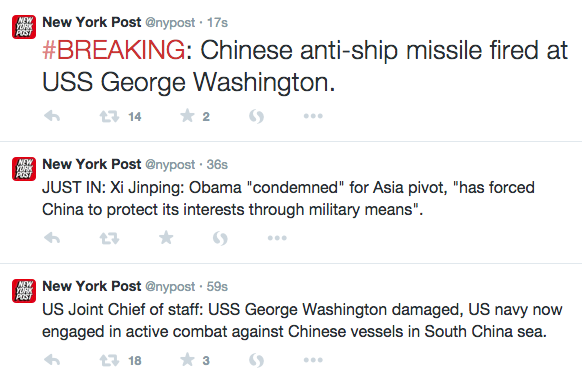 The Post quickly deleted the tweets, then notified users from their @NYPostBiz account that they had been hacked. The false tweets on UPI’s feed remained for over an hour before they were deleted.

For those unfamiliar, a bail-in is outlined in this article in The Economist:

A bail-out is when outside investors rescue a borrower by injecting money to help service a debt. Bail-outs of failing banks in Greece, Portugal and Iceland were primarily financed by taxpayers.

By contrast, a bail-in, a term first popularised in the pages of  The Economist, forces the borrower’s creditors to bear some of the burden by having part of the debt they are owed written off.

What would this mean for the average American? If you owned a U.S. savings bond, the government could devalue it. Luckily that’s not happening (and the Pope didn’t declare World War III either), but whoever perpetrated this attack clearly wanted to inspire financial panic.

When he’s not running BostonTweet (or running the Boston Marathon), Tom O’Keefe is running around promoting Flutter. He was in studio with SumuApp co-founder Daniel Tewfik earlier today to talk about how you can win free rent for a year in Boston. END_OF_DOCUMENT_TOKEN_TO_BE_REPLACED

While many have called out Davis since a video of her refusing to issue a marriage license to Rowan County residents David Moore and David Ermold went viral in July, relationship columnist and gay activist Dan Savage went a step further on MSNBC Tuesday night, saying that “this is about someone hypocritcally looking to cash in”. He added: “And she is a hypocrite.” END_OF_DOCUMENT_TOKEN_TO_BE_REPLACED

END_OF_DOCUMENT_TOKEN_TO_BE_REPLACED

Today, that briefly changed, as the hashtag #TheWorstPartofDepressionIs trended worldwide on Twitter, sparking a conversation on an issue many find difficult to discuss. END_OF_DOCUMENT_TOKEN_TO_BE_REPLACED

END_OF_DOCUMENT_TOKEN_TO_BE_REPLACED

David Filipov was part of the team that headed up the Boston Globe/Fox25 Olympic Debate last night. He offered his takeaways and analysis after an update on the latest exchange between Governor Baker and the USOC. All in all, our conversation does a pretty good job of getting you up-to-speed on all things Boston2024. END_OF_DOCUMENT_TOKEN_TO_BE_REPLACED