In the middle of a stroll down Harvard Ave last spring, something caught my attention as I passed by Refuge Cafe in Allston. It was nice out, and the sounds of a band setting up drifted through the open windows. I’d never seen bands play there, nor had I often seen places with live music in Boston have their windows open. I bumped into a friend of mine who said that Nice Guys was about to play, so I walked in to check it out.

When the band started playing, they immediately kicked the daylights out of their instruments, with enormous sounds blaring out of their amps. They were just a force, and by the end of their set guitarist and singer Alex Aronson was jumping out of the same open window while simultaneously ripping a solo. 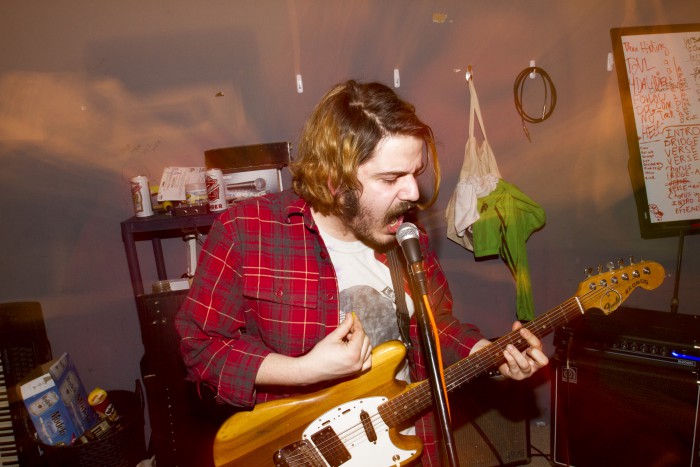 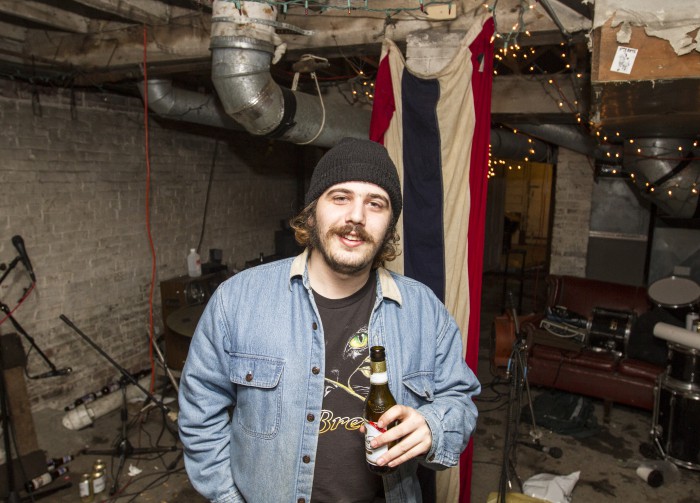 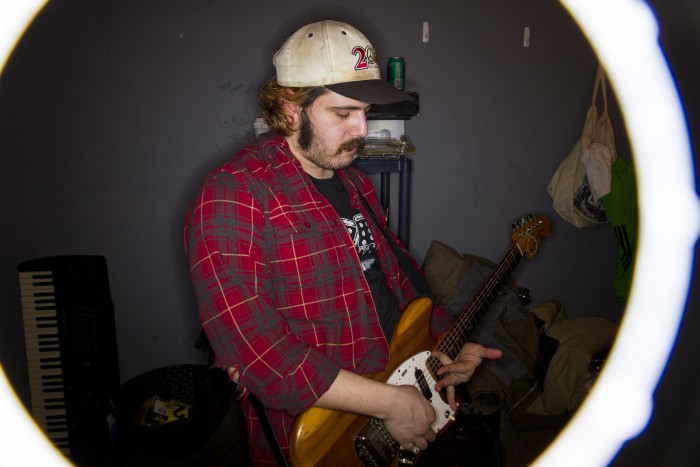 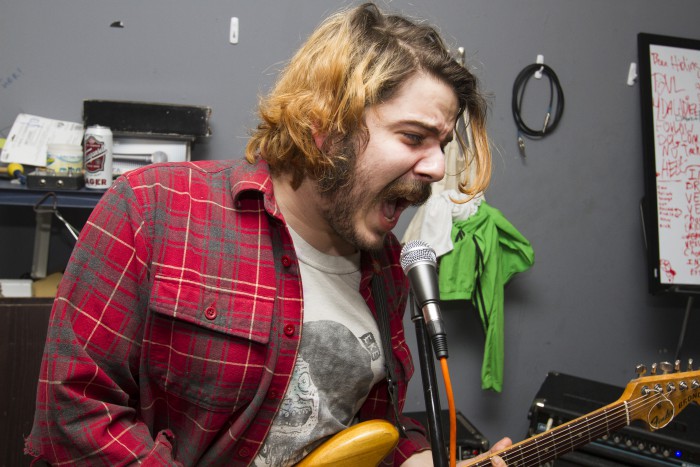 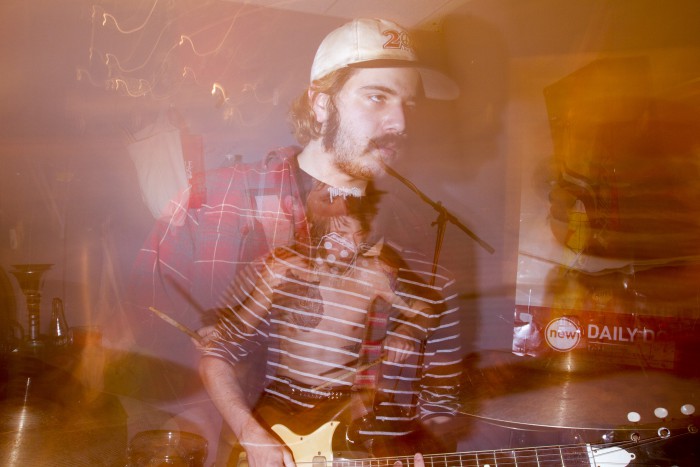 “I think that’s the most important thing about our band is the live show. I try to entertain … I don’t want to be that band [that just stands there]. I want people to come see my band and feel included,” said Aronson.

Nice Guys play a mix of punk and garage rock that doesn’t really invoke the tropes of either. They are loud and they are rough, but they are more fun than serious.

“Usually I say [we’re] stoner punk … like punk music if you’re really stoned and still want to play really fast, but don’t have the attention span to play a bunch of different riffs and do all these different things. It’s like groovy, but fast,” said guitarist Matt Garlick. “We like to call ourselves basement stoner or stasement boner, which ever one you prefer.” 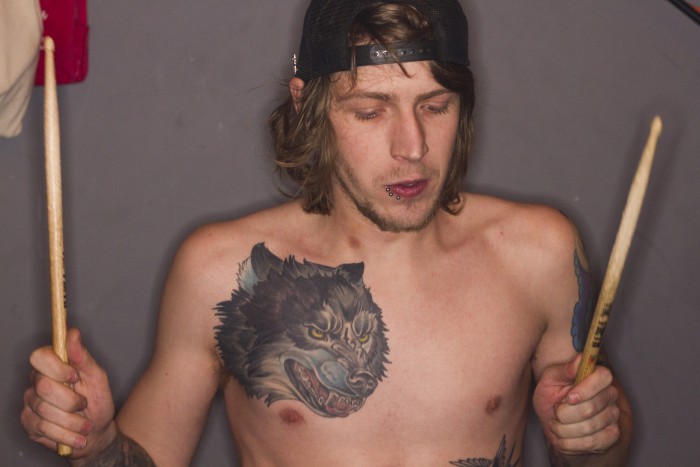 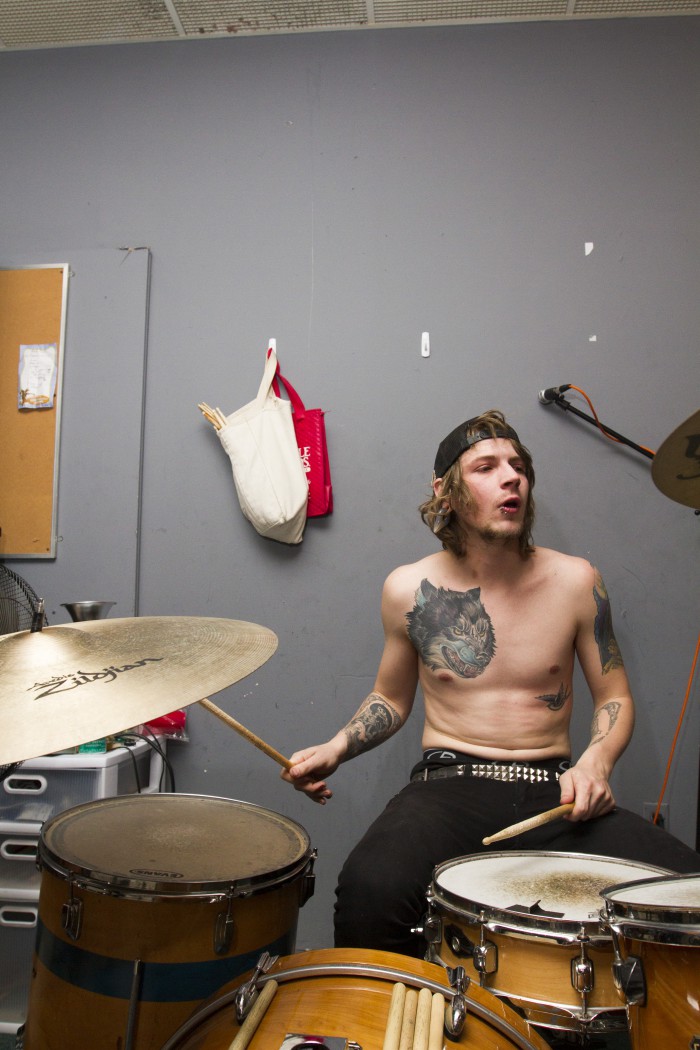 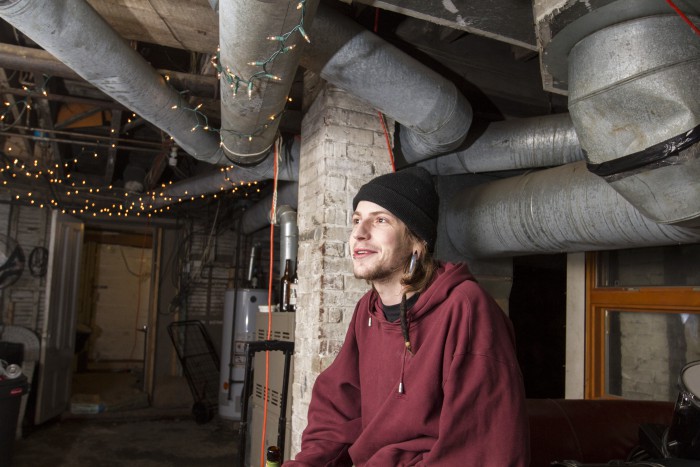 Nice Guys haven’t had a chance to do too many interviews. I brought up an interview they did with the Berkeley Beacon three years ago when the band just started. The piece, much to their chagrin, described them as a band that was “rocking the Allston underground.”

It wasn’t so much that they weren’t flattered by the statement, more that they were bashful and wanted to defer other more established bands that were helping them at the time. 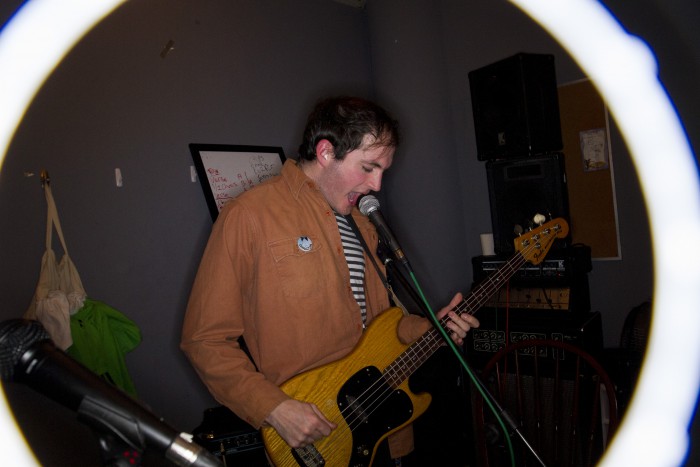 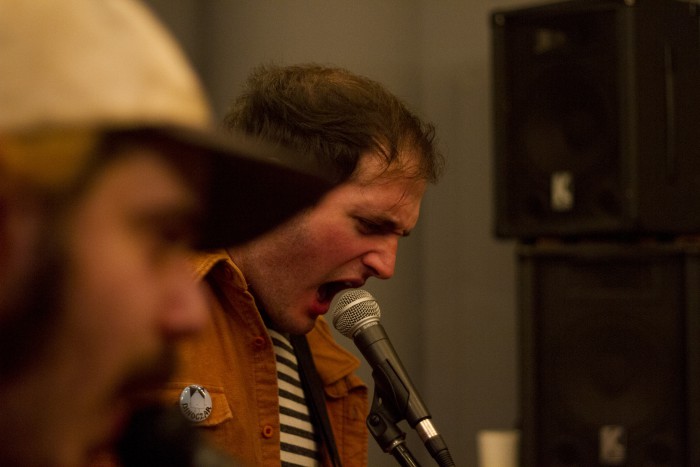 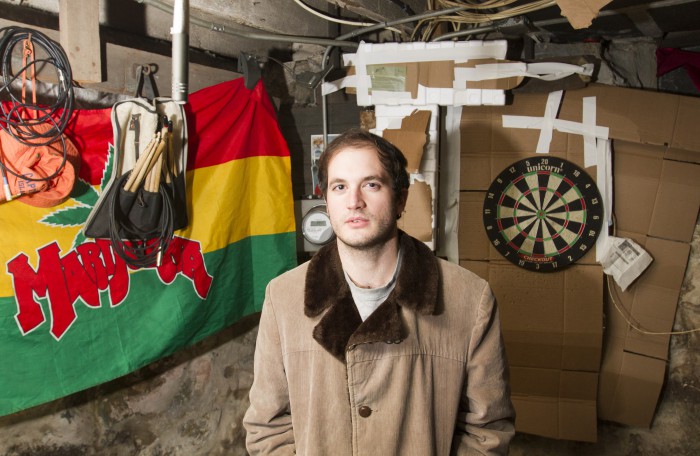 “There were some bands that were already around that took us under their wing and got us on some sick shows,” said bassist and singer Jake Gilbertson.

LAPD came out in August last year and Smith calls it the crowning achievement of the band thus far. In true Nice Guys style, the EP was recorded fast and loose. 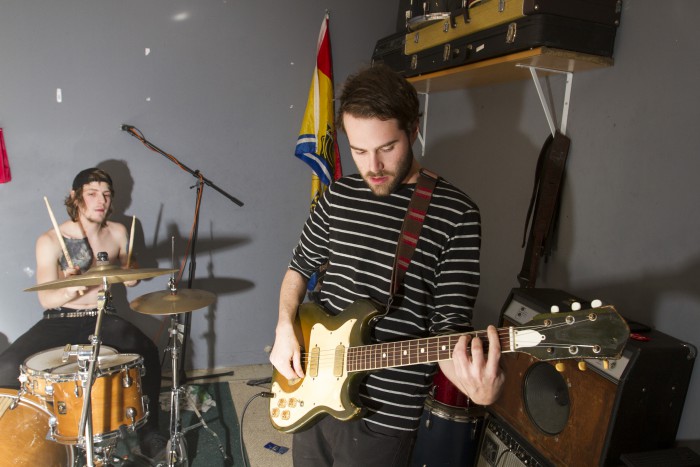 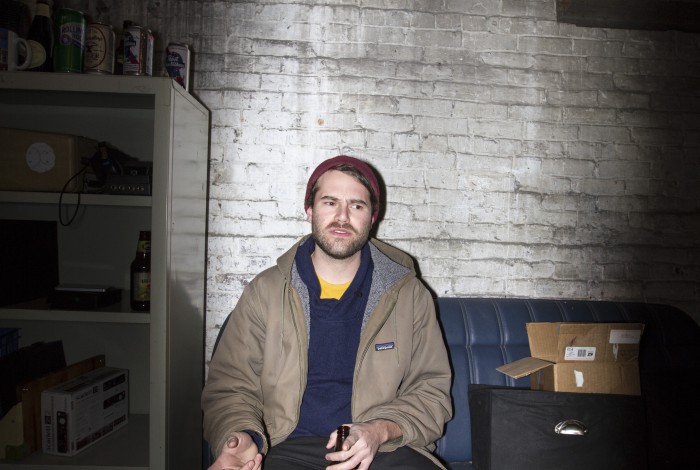 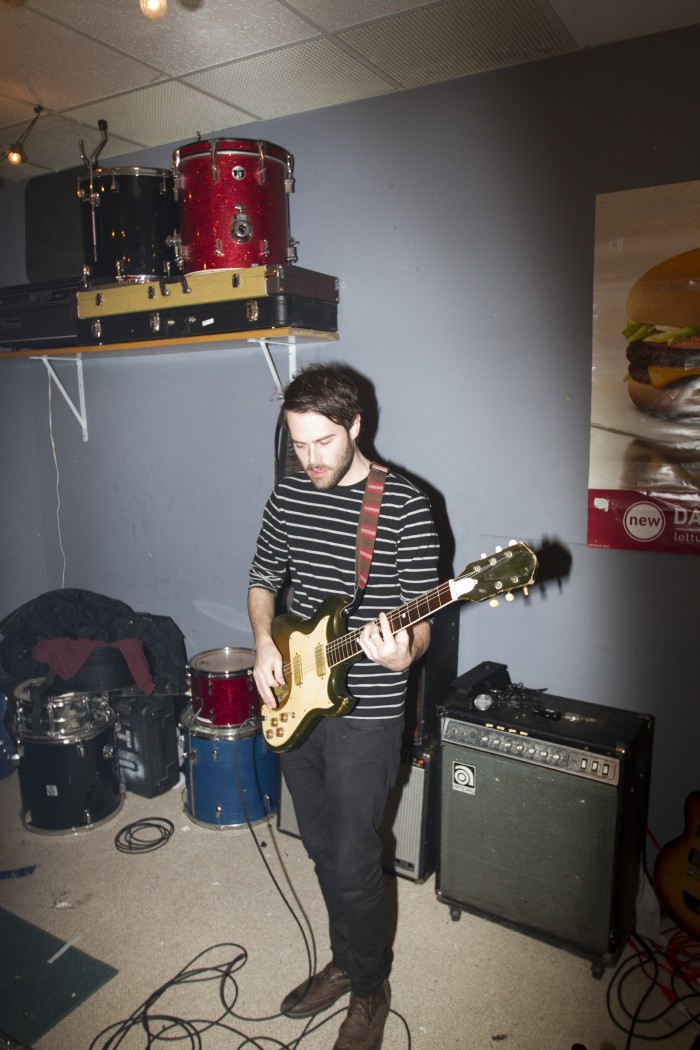 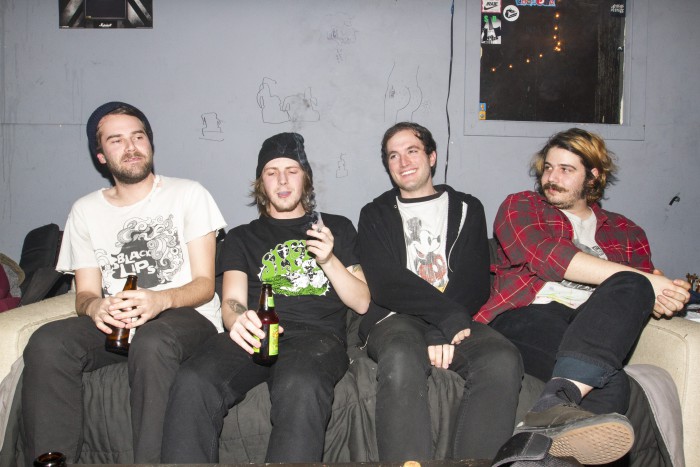 “We only went in there to do ‘Cop Walk’ and we were like, ‘well we have these other songs.’ So we just did one after the other and did six songs in seven hours. It was pretty fun,” said Garlick.

The band is currently poised to release much more new material with a tape called Chips in the Moonlight coming out February 12 on 456 Records, a track being recorded at Converse Rubber Tracks, a prospective split with Boston emigres Free Pizza, and even (ambitiously) a possible full length by year’s end. And yes, of course, they’ll continue to rock the Allston underground.

Perry Eaton writes for Boston.com. Perry Eaton talks on the radio with me from time to time. Today, he talked to me about what he’s been listening to and some upcoming shows and festivals worth checking out. Click here to read more. END_OF_DOCUMENT_TOKEN_TO_BE_REPLACED

In some ways, Palehound has always had a home in Boston. END_OF_DOCUMENT_TOKEN_TO_BE_REPLACED

Kal Marks is the kind of band that sneaks up on you. Whether you’re experiencing them at some basement show in Allston, or in an opening set for Pile at Great Scott, you may not see them coming, but they’ll immediately click. The combination of heavy sludgy riffs and lead singer Carl Shane’s unique crooning bowls you over. It’s dark and it’s compelling, but most importantly, it’s really earnest. END_OF_DOCUMENT_TOKEN_TO_BE_REPLACED

It’s not very often that some of the most talented performers in Boston are set to grace the same stage in a single night. This Sunday marks the 1 year anniversary of Mind Spray, a local hip-hop open mic and showcase series devised by promotion and booking company The Brain Trust. END_OF_DOCUMENT_TOKEN_TO_BE_REPLACED

There’s been a lot written about Street Dogs evicting a group of neo-Nazis from the pit at their House of Blues, Anaheim show on St. Patrick’s Day. You don’t need to read any of it. Just listen to front man Mike McColgan tell the story. He talks about joining his old band, Dropkick Murphys, on stage in Boston last week, too. END_OF_DOCUMENT_TOKEN_TO_BE_REPLACED

It’s not her best. END_OF_DOCUMENT_TOKEN_TO_BE_REPLACED

When in Nashville, do as the locals do. Since relocating to Tennessee a few months ago, this seems to have been Steven Tyler of Aerosmith’s approach after announcing in an October Twitter Q&A session that he intended to record a country album, an endeavor he’s well in the process of completing. END_OF_DOCUMENT_TOKEN_TO_BE_REPLACED

“I’m Shipping Up To Boston” just turned ten years old. Boston.com’s Matt Juul put this piece together on the history and significance of the Dropkick Murphys song, then joined me in studio to talk about it. END_OF_DOCUMENT_TOKEN_TO_BE_REPLACED

Boston is a city known for it’s Irish heritage, and it’s celebration of it. Two main traditions have held strong in Boston: the St. Patrick’s Day Breakfast and subsequent Parade. But I argue there is a third now: seeing the Dropkick Murphys at the House of Blues during their multi-night March Residency. END_OF_DOCUMENT_TOKEN_TO_BE_REPLACED

Sure, you might see a punk show on Monday and a chillwave band on Thursday and so on, but usually you favor one sound over another because you’re a busy bee and time is honey. It’s been the same for years, and the Prefab Messiahs can vouch. END_OF_DOCUMENT_TOKEN_TO_BE_REPLACED