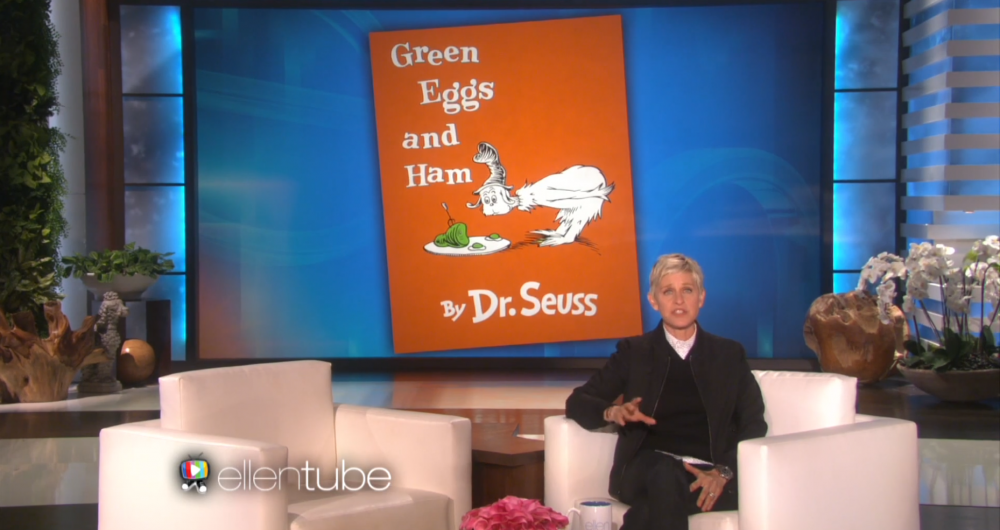 If you’re a fan of Green Eggs and Ham, you can now stream it in a house. You just need to use your mouse. You’ll be able to watch it anywhere. You can watch it everywhere. Netflix is adapting the Dr. Seuss classic. Ellen DeGeneres is producing, so let’s hope it’ll be fantastic.

The talk-show host announced her newest project on her show and the original children’s series has been slated for a 13-episode order. Set to be released in 2018, production will begin this May according to Deadline with Wreck-it Ralph writer Jared Stern penning the adaptation.

An animation based on a couple of words so to not binge-watch this would be absurd.

Always a pleasure to have Boston.com’s Perry Eaton in studio for a chat. After we talked a bit about Pearl Jam at Fenway and Perry’s new podcast, he filled us in on Game of Thrones live and Narragansett’s new Bananagrams-themed brew. END_OF_DOCUMENT_TOKEN_TO_BE_REPLACED

No, not from afar, from the comfort of her couch. From the actual awards themselves. That’s where Meredith Goldstein was for the Oscars. She shared all the juicy, first-hand details with me. END_OF_DOCUMENT_TOKEN_TO_BE_REPLACED

It was wonderful having our good friend Meredith Goldstein back in studio this morning. She dug into the latest edition of Love Letters, which prompted us to play this song. And of course we had to discuss the Oscars. Make sure you’re following Meredith on Twitter, as she’ll be live-tweeting the awards this Sunday night. END_OF_DOCUMENT_TOKEN_TO_BE_REPLACED

Our first edition of TV Sets for 2016 might be better than every edition from 2015. END_OF_DOCUMENT_TOKEN_TO_BE_REPLACED