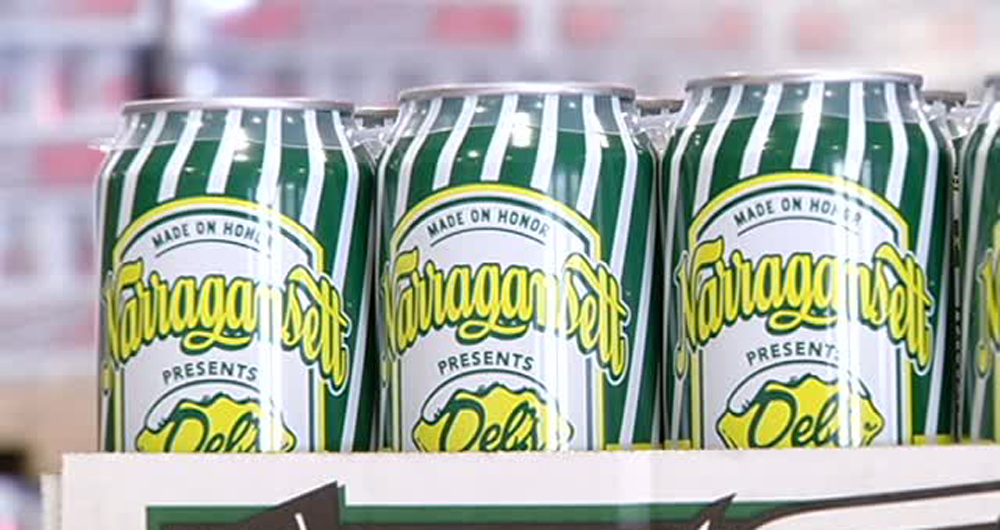 What is the greatest thing Rhode Island has ever shared with Boston? Deer Tick? Yeah, they’re cool. Rocco Baldelli? Seemed like a great pickup for the Sox, but he never really found his stride. Watching the Buddy Cianci scandal unfold from afar? That was kind of fun too, can’t lie. How about Newport Creamery’s “Awful Awful”? Trick question, for some disgraceful reason, that can only be found in Rhode Island (hope you’re paying attention, Mayor Walsh).

Rhode Island may be an underdog, but its gifts are abundant, and we may now be able to nail down the greatest thing that it has ever produced: Narragansett Del’s Summer Shandy.

It’s a match made in heaven, if heaven is where baseball players go before they’re called up to the Red Sox, or where Red Sox players go because there aren’t any strip clubs in Boston. Del’s Lemonade, the incredibly refreshing frozen lemonade that has quenched the souls of beach-going Rhode Islanders for years, combined with the classic tall boy brew that your dad was slugging the summer that “Jaws” came out in theaters. Finally, this week, drinkers across the northeast will be able to experience this nectar of the Gods.

“When it came to our second ‘Hi Neighbor Mash Up’ collaboration, nothing reminded us of childhood summers on Rhode Island beaches more than Del’s,” says Mark Hellendrung, president of Narragansett Beer through a release. “Given the sessionable style of our Lager, and the growing popularity of shandys, we knew a collaboration with Del’s would create a quintessential summer brew that generations of New Englanders would be thrilled about. The response has been amazing, people have been asking for its release almost daily since first hearing about the beer in February.”

Mr. Hellendrung, may we recommend an Awful Awful Cream Stout for the next Mash Up batch? Actually, that sounds kind of gross, never mind.

The beer has hit stores in Rhode Island, Massachusetts, Connecticut, and New York already, but if you haven’t seen it in your local packie, be patient, it will arrive soon. While it is only a limited release, there will be multiple production runs of the shandy, so it will likely be available into August.

Enter to win a pair of tickets to attend The Hess Collection Seminar and Dinner as part of Boston Wine Festival 2018 at the Boston Harbor Hotel on Wednesday, March 14th. END_OF_DOCUMENT_TOKEN_TO_BE_REPLACED

This year, the festival is welcoming more female wine producers than ever before, making up 20% of all winemakers that will be at the festival. END_OF_DOCUMENT_TOKEN_TO_BE_REPLACED

The holidays are here, so raise a glass. END_OF_DOCUMENT_TOKEN_TO_BE_REPLACED

‘Tis the season to mix a nice, stiff drink. END_OF_DOCUMENT_TOKEN_TO_BE_REPLACED

Warm up with Tito’s on your sweater and Tito’s in your glass. END_OF_DOCUMENT_TOKEN_TO_BE_REPLACED

There’s a ton going on at Idle Hands in Malden this spring. Dan McDonnell and Josh Deering joined me in studio to talk about Maifest, what’s new in the Taproom, and their collaboration with The Black Ale Project. Oh, and don’t miss Idle Hands at BeerAdvocate’s Microbrew Invitational next month! END_OF_DOCUMENT_TOKEN_TO_BE_REPLACED

Giovanna Guzman is the marketing coordinator at Kings Bowl, who you can visit in the Back Bay, Burlington, Lynnfield, Dedham, and soon in the Seaport. We talked beverages, naturally, seeing as it’s Thirsty Thursday. And we sampled sangria. And it was soooo good. END_OF_DOCUMENT_TOKEN_TO_BE_REPLACED

These five words might change your life: Farmer Willie’s Alcoholic Ginger Beer. Co-founders Nico Enriquez and Max Easton were in studio with me this morning. Nine-packs and kegs of Ginger Session coming next week! END_OF_DOCUMENT_TOKEN_TO_BE_REPLACED