Moth StorySLAM: In Search of Organic Stories in the Internet Age

If you use Facebook (71% of online adults), LinkedIn (22%), Twitter (19%), Instagram (17%) or any other web-based social network, you’ve digested someone’s perspective in what is the new standard storytelling format. Personal expression online allows the expresser to edit and format the stories they are telling. Meanwhile, readers are free to mute or interrupt, while multi-tasking if they choose. The experiences that “friends”, “connections” or “followers” share are non-linear. They can be started and stopped at will, perseverated on, or ignored completely.

If you think back to an English class long ago you’ll probably remember the storyteller Homer and his involvement with the idea of oral tradition. Centuries before personal accounts moved to the Internet, or even to paper, history was passed down by word of mouth. Epic tales were memorized and recounted at will with different wording and emphases each time. Oral tradition meant that stories were designed by the tone of the teller and the reactions of the crowd – history was formulated naturally in real-time even as it was recounted. Nowadays, oral tradition still engages audiences in the form of open mic & storytelling events across the country.

Since 1997, The Moth has been providing a space for traditional verbal storytelling despite existing in the age of non-linear sharing. The Moth is a nonprofit that has grown into a series of shows and “StorySLAMs” that happen in a number of American communities. At Moth events, volunteers share true stories spontaneously with live audiences. Guidelines exist, but the overarching narrative progresses as speakers pass the microphone along. The events are not subjected to rewrites, pauses and the other characteristics of Internet age storytelling and sharing. 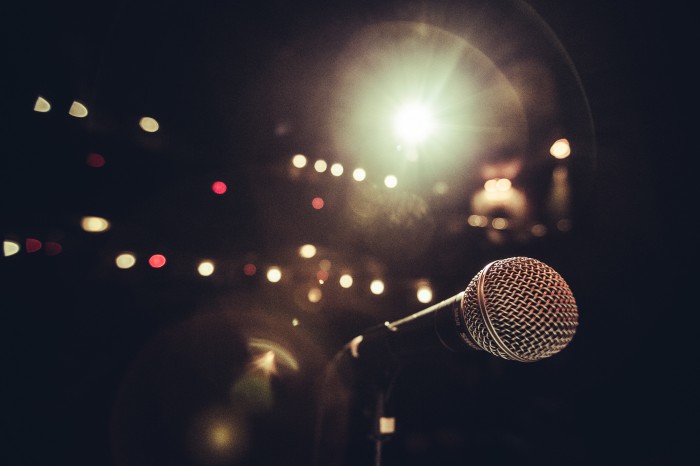 The Moth holds a monthly StorySLAM event at the Oberon Theatre just outside of Harvard Square in Cambridge. On a chilly October night, the house was packed for a “Lost and Found” themed evening of stories. Guided by a charismatic MC, ten volunteer storytellers were chosen. They took the stage one after another, giving unscripted renditions of their experiences, thoughts and wisdom. The audience participated anonymously by writing answers to a prompt: “What is something that you will forever regret losing?” as responses were read at random between speakers.

Over the course of two hours the “Lost and Found” concept guided the event, but the tales, banter and audience involvement coalesced to create an entirely organic storyline of their own. After an audience write-in mentioned losing a Tamagotchi, the retro toy inspired a theme of generational diversity. The unexpected inclusion gave depth to the conversation of the stories, while adding character and context to the theme.

Most noticeably, the storytellers guided the tone of the room with their candor. One speaker provided the quirky mantra “Keep your shit with you, or if you forget it, at least bring running shoes,” while another commented on how an individual’s role in society can dictate feelings of self-worth. The variety of speeches shared was refreshing, and worked contrary to the practice of channel-choosing that Internet and television motivate.

Oral storytelling provides a situation where listeners who don’t agree with or relate to a certain opinion are still required to listen, providing a rounded dialogue. While this experience doesn’t always result in start to finish satisfaction, it prompts the audience to engage with ideas outside of those that are familiar, understandable and safe.

So why should you check out The Moth, The Boston Poetry Slam, or another, similar open storytelling event? Because the singularity of the listening experience is worthwhile, but extremely rare in other mediums. While web-based articles, magazines and social media sites give readers the option of multi-tasking, or absorbing only fragments of an idea, attendance at a live event demands that you engage with the organic single-channel evolution of a story. Once onstage, volunteer storytellers have no editing process, nor do they have the option of exiting the conversation. The experience of the speaker becomes a living thing, rather than a piece of cold and calculated output. Connecting with a sense of oral tradition allows you to watch a story come to life in front of you, and provides motivation to react to original ideas outside of the scope of your natural tendencies.

The next MOTH StorySLAM event at the Oberon takes place tonight, November 25 at 8 p.m.

END_OF_DOCUMENT_TOKEN_TO_BE_REPLACED

Enter to win a pair of tickets to attend The Hess Collection Seminar and Dinner as part of Boston Wine Festival 2018 at the Boston Harbor Hotel on Wednesday, March 14th. END_OF_DOCUMENT_TOKEN_TO_BE_REPLACED

I referred to it as the “best kept secret” in Boston arts for the holidays. END_OF_DOCUMENT_TOKEN_TO_BE_REPLACED

Boston’s arts scene shines at this time of year. END_OF_DOCUMENT_TOKEN_TO_BE_REPLACED

It’s so much more than a holiday show. END_OF_DOCUMENT_TOKEN_TO_BE_REPLACED

Rock for a cause this holiday season. END_OF_DOCUMENT_TOKEN_TO_BE_REPLACED

Get out and see a show this holiday season, and save some money when you do. END_OF_DOCUMENT_TOKEN_TO_BE_REPLACED

You can help give the gift of music to kids in need this holiday season. END_OF_DOCUMENT_TOKEN_TO_BE_REPLACED

Be honest: when’s the last time you attended a Gala? END_OF_DOCUMENT_TOKEN_TO_BE_REPLACED