Mila Kunis Is a Tiny Woman With a Huge Baby 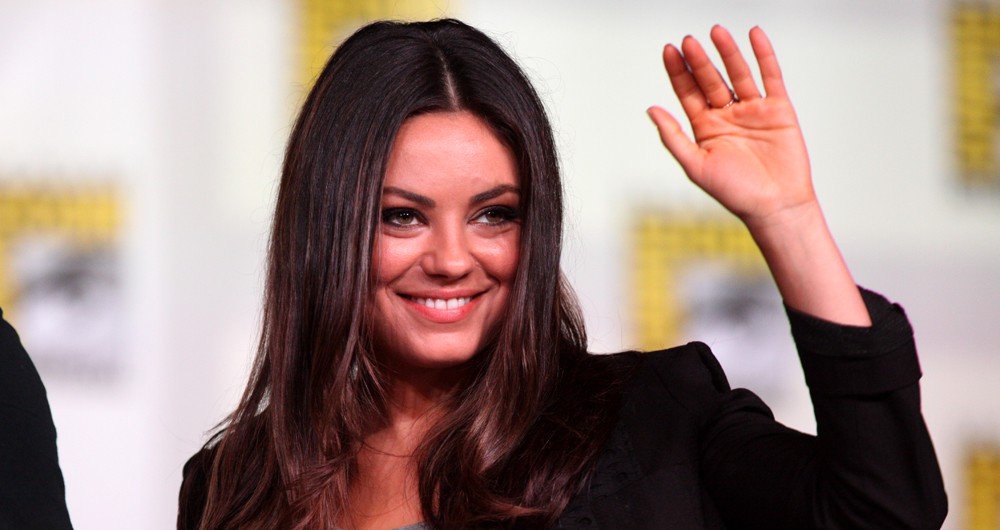 Today: there’s a parade, the commute is still terrible, and Mila Kunis apparently has a nine and a half pound baby.

When Kunis and Ashton Kutcher got together offscreen in early 2012, the world rejoiced after getting a sampling of the romantic pairing on That 70’s Show from 1998-2006. When the couple announced their engagement in February 2014, fans’ blood pressure began to rise, and when she gave birth to their first child, Wyatt Isabelle, in October of last year we couldn’t contain it anymore.

On a recent Ellen appearance, Kunis revealed that not-so-little Wyatt weighed nine and a half pounds at the time of birth and has continued to grow steadily.

As a woman who birthed two ten-pound monsters, my mom salutes you, Mila.

Though Wyatt’s mom only stands at five foot four, Kutcher looms at an impressive six foot two, and it would seem that she’s already taking after dad. Kunis is currently promoting her new film Jupiter Ascending with Channing Tatum and Eddie Redmayne, but explained to Ellen that she’s still unsure when she’ll be ready to return to Hollywood full-time with a baby at home.

The work of an actress playing a cleaning lady who discovers she’s the queen of the universe is never done (spoilers), though, and Kunis made her way onto the red carpet for the first time since Wyatt’s birth last night for the premiere of her new film. The appearance got rumors flying about the possibility of a secret wedding between her and Kutcher, with a band of diamonds sparking from her ring finger.

When Ellen asked whether she had tied the knot, Kunis played it cool.

Guys, give her a break – she’s been doing a lot of heavy baby lifting.

We ate vegan blueberry cake and it was amazing. END_OF_DOCUMENT_TOKEN_TO_BE_REPLACED

Golden Globe and Emmy nominee Benjamin Wallfisch is the composer responsible for the score of the hit movie IT. I talked to Ben about his approach to scoring the new version of this iconic story and his thoughts on film and music overall. Some very insightful commentary; listen in. END_OF_DOCUMENT_TOKEN_TO_BE_REPLACED

Dan Croll is a great musician and an even better person. END_OF_DOCUMENT_TOKEN_TO_BE_REPLACED

We kicked off the weekend with a visit from Sasha Purpura, Executive Director of Food For Free. Sasha was back to promote next month’s Craft for a Cause event, a craft beer festival celebrating the Central Square Cultural District. END_OF_DOCUMENT_TOKEN_TO_BE_REPLACED

Rupert Gregson-Williams is an award-winning film composer. He just so happened to compose the score for this summer’s big blockbuster Wonder Woman. We talked about his beginnings in film scoring, film scores that move and inspire him and, of course, Wonder Woman. END_OF_DOCUMENT_TOKEN_TO_BE_REPLACED

Summer is the hungriest time of the year. Millions of kids rely on school meals, but in summer, the meals disappear. HGTV’s Taniya Nayak was in studio this morning to talk about Taste of the Nation this coming Tuesday, June 6, which benefits Share Our Strength’s #NoKidHungry initiative. Click here to get your tickets. END_OF_DOCUMENT_TOKEN_TO_BE_REPLACED

Jeff Rapsis is a New England-based composer and performer. Lately, he’s been creating live musical scores for silent film screenings. I talked to him about his process and a few of his upcoming performances at The Capitol Theatre in Arlington and the Somerville Theatre. You can keep track of where else Jeff is scoring silent films here. END_OF_DOCUMENT_TOKEN_TO_BE_REPLACED

Community Servings provides nutritious meals to individuals and families living with a variety of illnesses. Stephanie Carrigg was in studio this morning to talk about this year’s Meals4Moms program, where your contribution not only helps feed moms in need, but nets you some great goodies for a mom in your life. END_OF_DOCUMENT_TOKEN_TO_BE_REPLACED