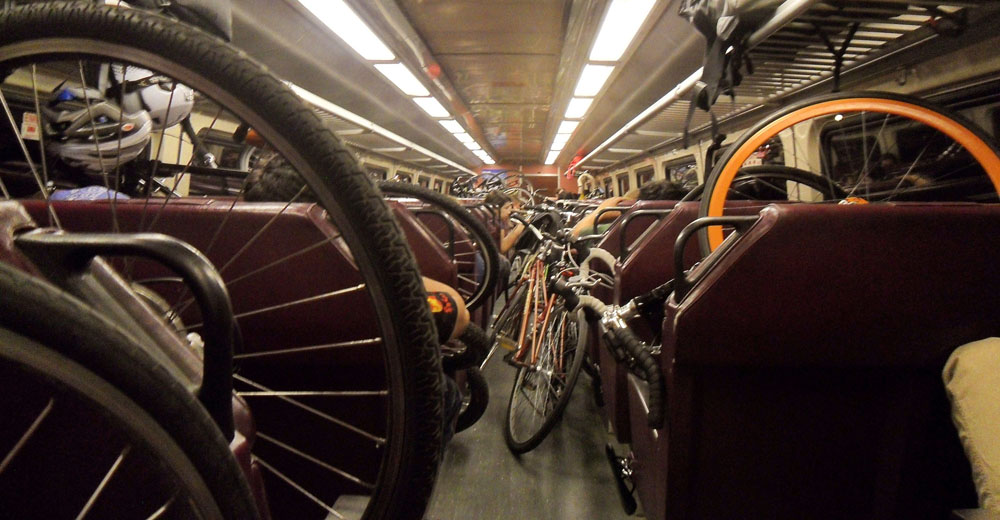 Even without logistical support from the MBTA, and in face of active discouragement from public safety and marathon officials, the Midnight Marathon Bike Ride is still on for this Sunday. For the sixth year, hundreds of bicyclists will trace the Boston Marathon route in the wee hours before the race begins.

Greg Hum, who started the Midnight Marathon Bike Ride in 2009 while an undergrad at BU, says that he and fellow ride organizers are committed to continuing the tradition, even given the obstacles.

“To not have a bike ride this year would be a step backward,” Hum says.

Over the past few months, the Massachusetts Emergency Management Agency and the Boston Athletic Association have asked Hum and fellow organizers at the Boston Society of Shenanigans to cancel the ride, citing a range of safety, noise, and security concerns. In March, the MBTA announced that it would not provide a dedicated commuter rail for the ride as it had in 2013.

But Hum insists that the event’s viral nature means he couldn’t call it off, even if he wanted to cancel.

“It’s become such a tradition that it’s beyond my control,” he argued in meetings with MEMA and the BAA. “It would be impossible for us to cancel, or pause, or even change the date of the ride.”

Without a dedicated commuter rail train, ride organizers had to get creative about transporting cyclists and their steeds. Their solution: hire moving trucks to ferry 300 bikes out to the Southborough commuter rail station, whose owners will take the commuter rail out to the ride start.

In a compromise with public safety officials, the organizers have redrawn their route to avoid the marathon start and finish lines entirely.

All information about the ride, including tickets for the bike trucks and detailed routes for those coordinating their own transportation to Southborough, can be found on the BostonSOS website.

END_OF_DOCUMENT_TOKEN_TO_BE_REPLACED

Enter to win a pair of tickets to attend The Hess Collection Seminar and Dinner as part of Boston Wine Festival 2018 at the Boston Harbor Hotel on Wednesday, March 14th. END_OF_DOCUMENT_TOKEN_TO_BE_REPLACED

The Black and Gold continue their run tonight at TD Garden. END_OF_DOCUMENT_TOKEN_TO_BE_REPLACED

Who will make the Class of 2018? END_OF_DOCUMENT_TOKEN_TO_BE_REPLACED

It’s been awhile since we talked Black and Gold. END_OF_DOCUMENT_TOKEN_TO_BE_REPLACED

You’re going to wish you were in the Northern Alps. END_OF_DOCUMENT_TOKEN_TO_BE_REPLACED