‘Married at First Sight’ Is a Matrimonial Train Wreck 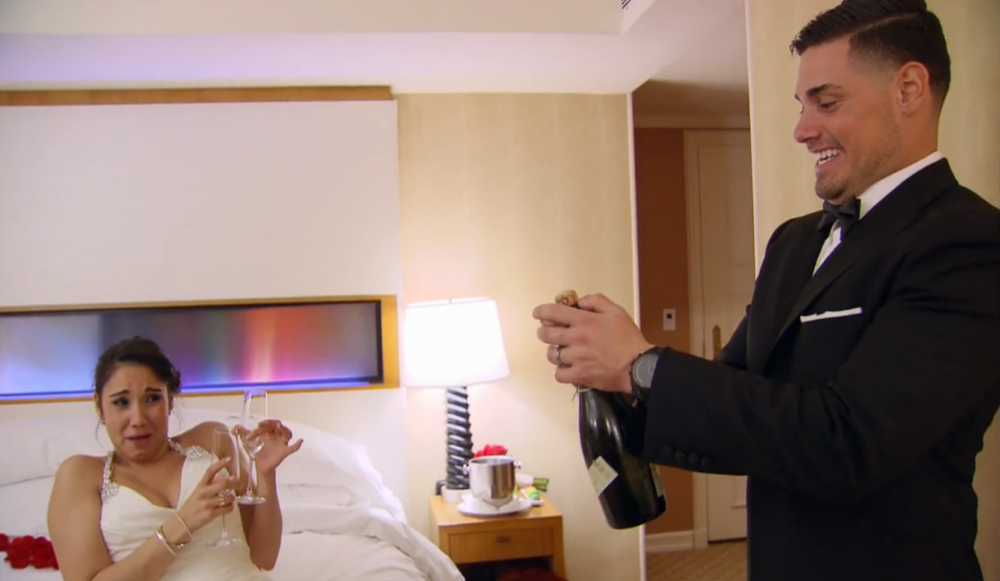 Married at First Sight is show about marrying a complete stranger.

Here’s what your mom looks like when you tell her you’re going to marry a complete stranger.

The third episode of Married’s second season aired Tuesday night on FYI, profiling three couples as they spent their first night of wedded bliss together. In case you’re not caught up, A&E gathered a diverse pool of  six singles for this experiment.

The brides and grooms are all between 28 and 34 years old. The guys have have thick brown hair, thicker New York accents, and two of them are named Ryan.

It’s a real melting pot. Of people who eat at The Melting Pot.

Ryan D. didn’t bother to take his tuxedo off and Jessica kept her wedding gown on as they shared a ramekin of French onion soup in bed. Davina, who is “all about the universe,” interpreted the coincidence of her lock-and-key necklace with husband Sean’s chained-up box of wedding gifts as a sign that they were meant to be.

And Jaclyn—ever the romantic—proclaimed that she was unattracted to Ryan R., “right off the bat.”

The biggest question of the night was whether or not any of the new spouses would have sex.

Jessica and Ryan D. ended up being the only couple who sealed the deal. And while it seemed like things were gonna get a lil’ freaky after Sean brought out a “One Night in Paris”-esque camcorder for Davina, she proclaimed, “No! No consummation of the marriage. I just met the guy. I’m married to him but, still, I just met him!”

Traditional values: they do still exist!

By day three of their marriages, the couples arrived at their respective honeymoon locales. And that’s when the casual racism started!

While out to eat, Ryan D. told a waiter that Jessica—who is Spanish—would most likely go for rice and beans as her choice of side dish. Since apparently nothing says love like flippant stereotyping, Sean implied that Davina—who is Indian—would go for a spicy entrée before asking her if she’d ever dated Caucasian guys. Meanwhile, Jaclyn and Ryan R. both eagerly admitted that they pee in pools.

It didn’t take long for us to identify the issues everyone is bringing into their respective relationships.

Sean admitted that he was bullied as a child for being overweight.

Davina’s father left her when she was 7 years old.

And, underneath the meathead facades of Ryan R. and Ryan D., nuggets of insecurity surely await the loyal viewer. We can’t wait.