“Entourage” devolved from a humorous look at Hollywood excess into broad self-parody over the course of eight seasons, but enough Ed Hardy-clad personal trainers own the entire series on DVD, so we now have the “Entourage” movie trailer debuting before its arrival in theaters next summer.

The trailer begins with everybody’s least favorite movie star Vinny Chase (Adrian Grenier) as a superhero activist DJ whose EDM jams are so hot and so subversive the police have sent a Ferguson-sized militia to make sure his public rave stops before it drops. (“It” being the single-grimiest EDM beat ever heard by human — or robot — ears.)

Turns out this mega-douche fantasy is a Vinny Chase pet project, and he sunk over $100 million into the project, shocking no one. And now we enter into “Every Week on Entourage” territory.

We don’t know anything about the film other than this trailer provides, but it’s a guarantee that Ari is going to be angry, Johnny Drama is going to be a misogynist jerk, Turtle will have a boring-as-hell romantic subplot, E will be annoying, and just when it seems like everything is going wrong, a little bit of luck and a whole lot of Vince having sex with models ensures that everything works out. It’s the American Dream drenched in Axe body spray. It’s the origin story of an anthropomorphic jug of creatine. It’s porn based on Mark Wahlberg’s view of Mark Wahlberg, directed and produced by Mark Wahlberg.

Speaking of the “Entourage” producer, Marky Mark makes a cameo at the end of the trailer, clad in a “Get Marked” t-shirt in case we weren’t sure who he was or whether he was a complete tool. Then comes the joke that hammers it all home:

Ari: “He doesn’t like Drama — wants to cut him out.”
Wahlberg:“If they tried to cut out my brother, I’d kill somebody. Even if he sucked as bad as Drama probably sucks.”

Haha get it, “Entourage” is Marky Mark’s life! See him standing there with a random entourage of guys who look like they were plucked fresh out of 1980s Dorchester? That’s his crew! Vinnie and Drama don’t want to go back to Queens, Marky Mark doesn’t want to go back to the three-story shanties he grew up in. *sniff* It’s beautiful.

The biggest tragedy about the “Entourage” movie other than it’s entire existence is that the parody Entourage Movie Tumblr account has now been replaced with the real thing. To mourn its passing, we’re publishing our favorite “leaked” page of script. 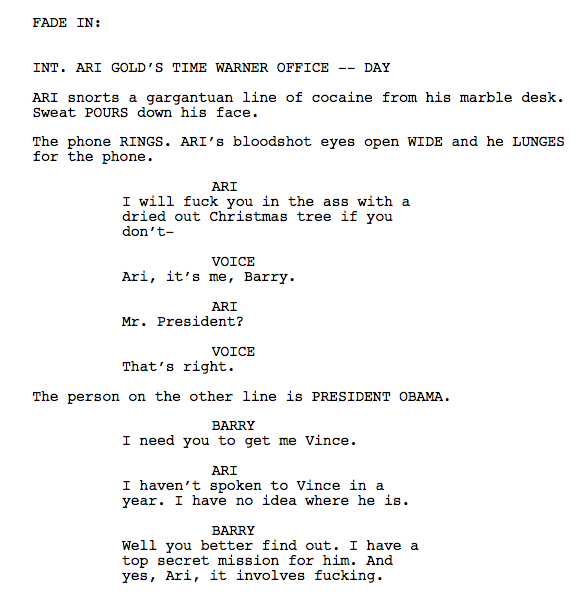 Enter to win a pair of tickets to attend The Hess Collection Seminar and Dinner as part of Boston Wine Festival 2018 at the Boston Harbor Hotel on Wednesday, March 14th. END_OF_DOCUMENT_TOKEN_TO_BE_REPLACED

A decade of Wreck The Halls. END_OF_DOCUMENT_TOKEN_TO_BE_REPLACED

Golden Globe and Emmy nominee Benjamin Wallfisch is the composer responsible for the score of the hit movie IT. I talked to Ben about his approach to scoring the new version of this iconic story and his thoughts on film and music overall. Some very insightful commentary; listen in. END_OF_DOCUMENT_TOKEN_TO_BE_REPLACED

Rupert Gregson-Williams is an award-winning film composer. He just so happened to compose the score for this summer’s big blockbuster Wonder Woman. We talked about his beginnings in film scoring, film scores that move and inspire him and, of course, Wonder Woman. END_OF_DOCUMENT_TOKEN_TO_BE_REPLACED

Jeff Rapsis is a New England-based composer and performer. Lately, he’s been creating live musical scores for silent film screenings. I talked to him about his process and a few of his upcoming performances at The Capitol Theatre in Arlington and the Somerville Theatre. You can keep track of where else Jeff is scoring silent films here. END_OF_DOCUMENT_TOKEN_TO_BE_REPLACED