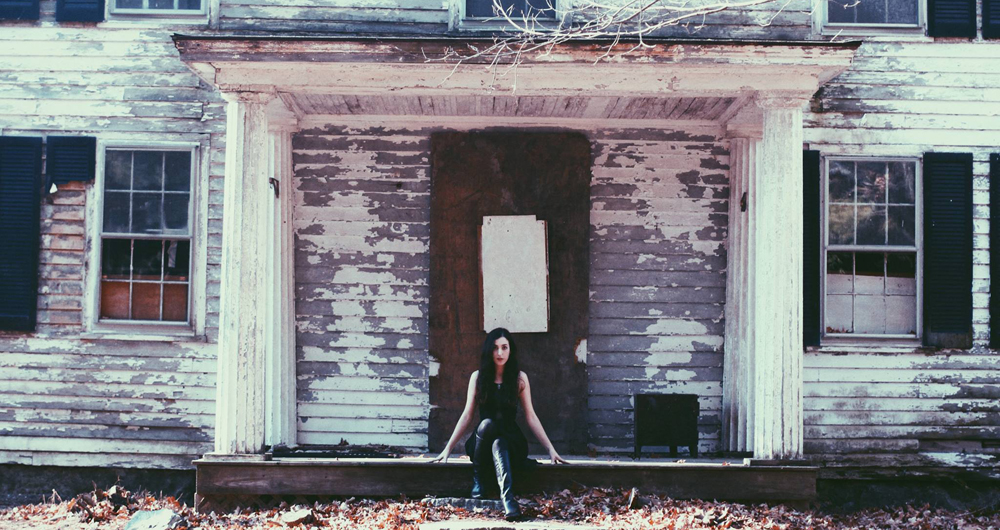 Although she calls the Boston-area home, Marissa Nadler is not an artist that you can expect to see around the area with any regularity. That’s because she’s been busy touring around the country and abroad for the last ten-plus years. Not bad for road-tested 32 year-old songwriter, who brings her new album, “July,” for an intimate performance and Q&A at Cambridge’s Red Star Union this Thursday.

The black & white “July” cover features a photo of Nadler standing with combined assertiveness and elegance in front of a brick wall and light-flooded window. At first, the chiaroscuro elements of the composition seem to underscore the gothic folk and early country elements that Nadler draws from with her music–where contoured, lonesome harmonies, yearning steel guitar and maudlin strings strike the primary counterpoints to Nadler’s own guitar and oblique narratives.
But according to Nadler, who is also a visual artist by trade, the central image of “July” is simply intended to be classic. “I like simple,” she says via phone from Roslindale. It’s just the cherry on top of an intense, laborious songwriting process that led to an album that feels already to have lasting merit.

According to Nadler, the time between the conception of 11 tracks on “July”and their eventual recording ran from July 2012 to July 2013. “I hadn’t written anything for a while. It was months and months of being really hard on myself,” says Nadler, who penned at least 20 new compositions for the album before settling on the final cut.  The incubation period was one of great focus for the songwriter, who accounts that she drew more from her own personal experiences and memories on this album than any of her previous projects. Putting her own life more into the script this time is rewarding for Nadler, who struggles with some of her own material because “it wasn’t from the heart.”

But this doesn’t mean that the narratives of “July” are an open book. Quite to the contrary, Nadler’s work maintains a steady etherealness throughout that makes it difficult to look too closely into the light. Underneath the surface of her commanding yet ghostly croon (as if she were looking deeply out into the crowd, yet at no face in particular), Nadler’s backing tracks hold her songs aloft in a sumptuously atmospheric setting where a listener can’t help but feel rather than think.

The standout elements of Nadler’s newest tracks, and those most likely to draw in your emotions are the harmonies. Fans of the singer’s melodies should rejoice too, because “July” offers her vocal-lines manifold. “On this particular record the harmonies were part of the demo process,” says Nadler. “I went into the studio actually having the harmonies for this record. So it wasn’t just an afterthought. They were a part of the song that was really important.”

Although the harmonies of “July” find Nadler working subtly within a classic mountain music tradition (she names the Andrews sisters, Carter Family, Tammy Wynette, Sammi Smith, and the Everly Brothers as influences), the bends and glisses of her voice mimic the sound of her own pedal steel arrangements. Synesthetically almost. Just as the sounds of her bowed strings hold the air still like glassy synthesizers, rather than hawing out the traditional countermelodies. It’s at these moments when Nadler’s lush vocals and the instrumentation become indistinguishable, and her narratives burst to life.

“I think that people initially respond to the atmosphere of my music,”says Nadler. “Hopefully they will listen a second and third time to the lyrics, which I think is really important. I think they are slow burning. My music doesn’t hit you over the head at all. It’s very subtle.”

By creating the space and time for the listener to just feel and be absorbed, Nadler draws you in without having to deliver a sales pitch. The literal message is not the key. The moment in “Drive” where you start feeling like you are sitting in the passenger seat of a sedan, driving through a rain storm at night–that’s the moment when the song has transfixed you.  When she sings in the refrain “still remember all the words to every song you ever heard,” your own thoughts rush to mind. It’s your own hand on the radio dial, not hers. Likewise, the moment in “Dead City Emily” where she sings “I was coming apart those days” with the full imbuement of Donovan’s prettiest melancholy, you almost don’t need to know the rest of the story. Leave the details in your peripherals and let them burn slowly.

Enter to win tickets to see Trio Da Kali at The Villa Victoria Center of the Arts (Newton, MA) on April 10th. END_OF_DOCUMENT_TOKEN_TO_BE_REPLACED

END_OF_DOCUMENT_TOKEN_TO_BE_REPLACED

Enter to win tickets to Rhye at The Paradise on February 28th. END_OF_DOCUMENT_TOKEN_TO_BE_REPLACED

Her new album has been pushed back, but we have Kimbra’s new single for you. END_OF_DOCUMENT_TOKEN_TO_BE_REPLACED

The folk duo returns with a new record this week. END_OF_DOCUMENT_TOKEN_TO_BE_REPLACED

Now that we’re done looking back at 2017, let’s look ahead at 2018. END_OF_DOCUMENT_TOKEN_TO_BE_REPLACED

Our first Song of the Week for 2018. END_OF_DOCUMENT_TOKEN_TO_BE_REPLACED

In a year when so many things were off, the music was right on. END_OF_DOCUMENT_TOKEN_TO_BE_REPLACED