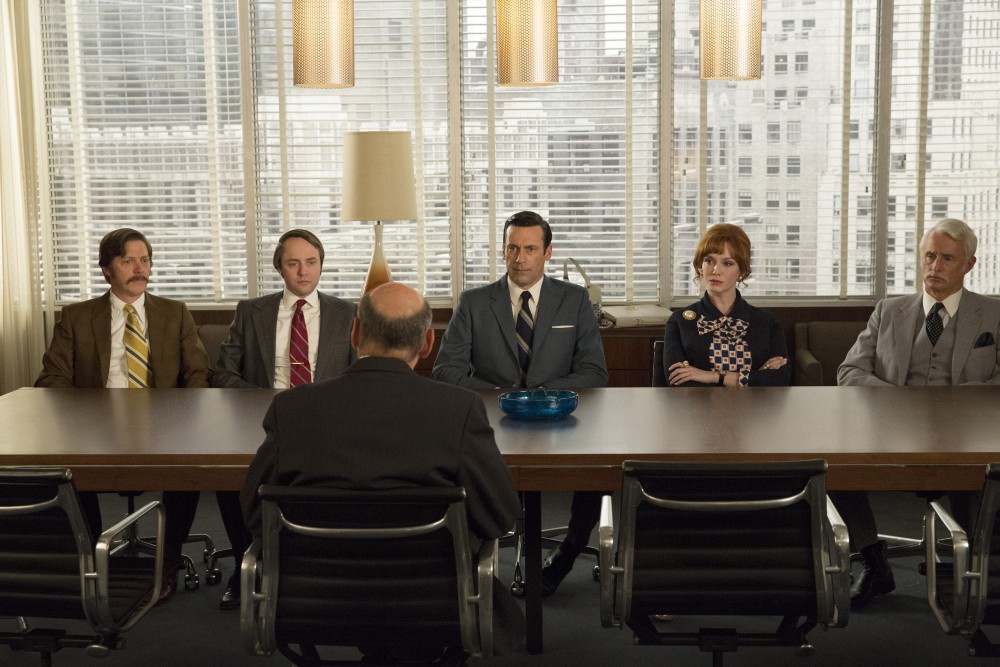 I suppose it was only a matter of time. In fact, it seems like it was always inevitable when Roger receives the news McCann-Erickson has given notice on the SC&P lease. While keeping their building was originally part of the deal, it’s presented as a financial decision when Roger confronts Ferg. Don, Joan, Ted, Pete and Roger are in the know. Pete then tells Peggy, a decent move for once. This episode should be called “The One When Pete Was Nice to Women,” because it’s such an uncharacteristic change.

Don almost immediately springs into action, gathering the partners to secure three multi-million dollar accounts that create conflict for McCann within 24-hours. In theory, the proposition could be enough to keep S&P in independent existence in their California office. It would be too big a loss to dissolve them otherwise. While Burger Chef and Sunkist are done deals, Ken smugly turns down the idea and walks out the door with Dow.

A move to California could put Don and Ted both back in the same state as their ex-wives, something they consider before shrugging the looming proximity off. Ted, a self-sacrificial lamb, wants to stay in New York. He met someone, and he likes McCann. Don is indifferent.

Pete’s side story this week involves a bizarre run-in with admissions at Greenwich Country Day, where Tammy’s been denied admission. He and Trudy’s four-year-year-old daughter’s interpretation of a “man” as a necktie and a mustache is pretty funny, but it’s more Pete’s family tree than her lack of art skills that put her on the blacklist. (“The king ordered it!” doesn’t fly.) One prep school punch later and Pete’s feeling empowered. He returns with Secor Laxatives.

Throw Tinkerbell Cookies in the mix, and it’s $18 million in billings.

Meanwhile, Peggy discloses her intel to Stan and reaches out to a recruiter. Last week, she’s telling Don she wants to be the first female creative director of the agency. This week, she’s jumping ship. The recruiter tells her to stay put, McCann could be the best option she’s got. She and Stan have some back-and-forth involving children following a casting, and she gives up the ghost on her son from season one. Her conflicted numbness is palpable. Kids aren’t for everyone, Peggy. It’s cool. But it’s sure hard to imagine your life without one when everyone else seems to wonder where you went wrong.

The SC&P partners storm McCann guns blazing. Don’s ready to go all Don on them, but he barely starts his presentation when Jim Hobart steps in. “You’ve won,” he informs them. The absorption is complete. Mi casa es tu casa, sort of. And as though he knows what each partner — with the uncomfortable exception of Joan — truly desires, he presents them with McCann’s dream team: Ortho Pharmaceutical for Ted, Buick for Roger, a Nabisco for Pete, and Coca-Cola for Don. “You are dying and are going to advertising heaven,” Hobart assures them. Yes, but you’re still dead.

The partners seem to be unsure whether they should celebrate the conclusion or not, but decide to drink anyway. As they begin to go their respective parting ways, we find out Roger is still seeing Marie Calvet — and Megan knows. Don is skeptical, but shrugs it off. He heads out to find Diana, but hits a brick wall. She’s moved out, left her furniture to the next tenants. Joan goes off to her West Coast millionaire who is shaping up to be a pretty decent boyfriend, and Pete shares her cab. They share a sense of pessimism, but accept their fate as it stands.

Back at the office, rumors of the merge have the staff on high alert. “There are rumors flying like bats around here,” cries Meredith. She demands Don tell the office what’s going on — probably the most practical thing she’s done during her entire length of employment at SC&P.

The artificial showmanship of the announcement leaves the office in a state of panic. The worried murmurs are a far cry from the prior proclamations of reinvention in episodes past. “This is the beginning of something, not the end,” Don desperately shouts over them. Dean Martin’s “Money Burns a Hole in my Pocket,” and the anxious bustle of worker bee employees fearing for the jobs drown him out.

Quotes worth repeating:
Lou Avery is moving to Tokyo to finally pursue his dreams as a cartoonist. Yes, Scout’s Honor is really happening. His “goodbye” to Don: “Well, sayonara, my friend. Enjoy the rest of your miserable life.”

Trudy hypothesizes that she and Pete’s divorced status is what’s keeping Tammy out of Greenwich Country Day, but Pete’s not buying it: “Greenwich, Connecticut is built on divorced money.”

By far my favorite quote of the season, perhaps the show. Peggy, preach: “Maybe she was very young. And followed her heart and got in trouble. No one should be able to make a mistake and not move on. She should be able to live the rest of her life. Just like a man does.”

Always a pleasure to have Boston.com’s Perry Eaton in studio for a chat. After we talked a bit about Pearl Jam at Fenway and Perry’s new podcast, he filled us in on Game of Thrones live and Narragansett’s new Bananagrams-themed brew. END_OF_DOCUMENT_TOKEN_TO_BE_REPLACED

No, not from afar, from the comfort of her couch. From the actual awards themselves. That’s where Meredith Goldstein was for the Oscars. She shared all the juicy, first-hand details with me. END_OF_DOCUMENT_TOKEN_TO_BE_REPLACED

It was wonderful having our good friend Meredith Goldstein back in studio this morning. She dug into the latest edition of Love Letters, which prompted us to play this song. And of course we had to discuss the Oscars. Make sure you’re following Meredith on Twitter, as she’ll be live-tweeting the awards this Sunday night. END_OF_DOCUMENT_TOKEN_TO_BE_REPLACED

Our first edition of TV Sets for 2016 might be better than every edition from 2015. END_OF_DOCUMENT_TOKEN_TO_BE_REPLACED