Local musicians mourn loss of ‘Night of the Living Deadhead’ 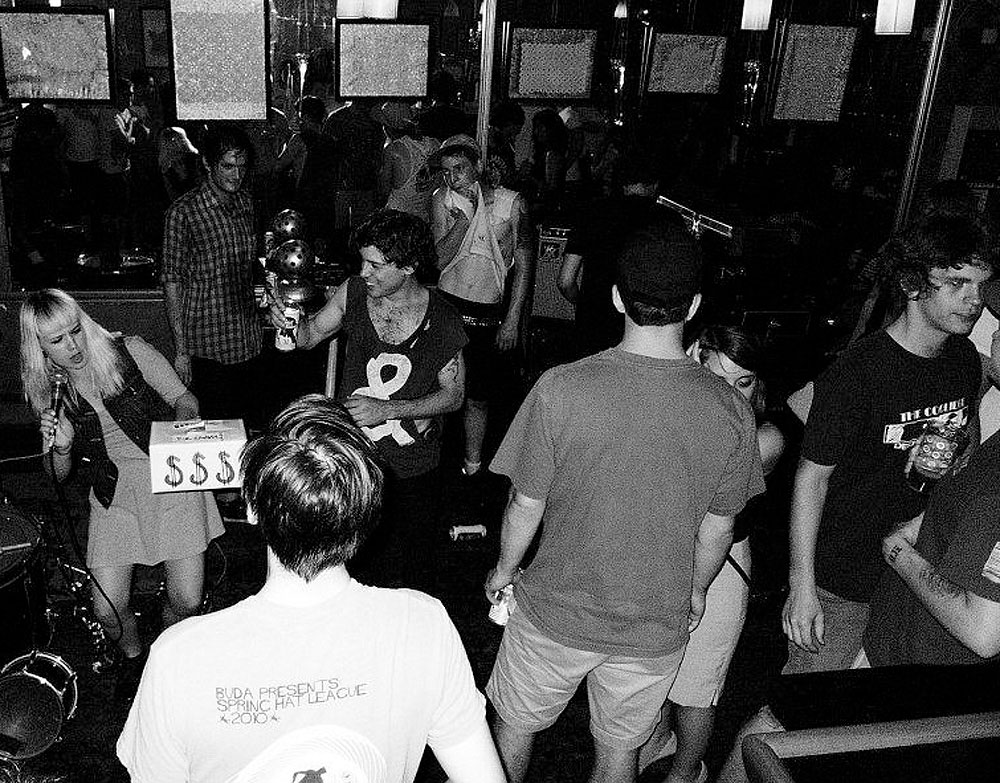 Monday night in Cambridge isn’t typically the hottest time to see a live show, but for the past five years, music-goers have looked to ZuZu’s “Night of the Living Deadhead” for an early week dose of free, great psych/pop/indie to start their weeks. Now that the weekly show is coming to a close, what kind of a hole does it leave in the scene?

“[Night of the Living] Dead Head was one of the best weekly nights Boston has ever known, incorporating touring bands and transforming a bar into a haven for independent music in true DIY fashion,” says Boston Compass editor Sam Potrykus, who has played Monday nights at ZuZu with Welcome Home, Ambitious Tugboat, and Manners. “It will be missed, but its memory will live on—reminding us all that any night of the week can be made legendary with a little thought and dedication.”

At 10 p.m. on a Monday, tables get dragged away from the dining room of the small restaurant (which is attached to and owned by the Middle East) and the space gets transformed with “Cinderella” whimsy into the coziest (and some say coolest) rock club on Massachusetts Avenue. Hand-made flyers hanging on the entrance, colored with crayons by ZuZu bar patrons over the course of the week, give a clue to the rough-hewn, makeshift sounds that are about to happen on the inside. The dude behind this operation is Johnny Allen, known for his work with Boston bands the Fedavees and headband, his Facebook alter-ego “Edison Tesla,” and also the main man mixing drinks at ZuZu on Monday nights. This month, Allen will be hanging up his towel after nine years and moving on (namely, a new bartending gig at the Independent in Union Square). Of course, he’s planning on ending things with a little fanfare.

The last two episodes of Night of the Living Deadhead (a/k/a ZuZu Mondaze, with a nod to the psych leanings of Allen’s musical tastes) are going to be doozies. On Nov. 18, Blinders and CreaturoS will provide the penultimate toast to all things Johnny Allen. CreaturoS is a natural choice since bassist Joe Marrett has been working alongside Allen at ZuZu for the last four years and will soon be taking over the Monday night booking there under a new, yet-to-be-decided name.

“There are a lot of people in this town who just like to check out what’s going on. Some of them work in the restaurant business and Monday night might be their party night,” Marrett says. He credits Allen with building up a great scene at ZuZu, a favorite for musicians and locals alike, and hopes to bring a similar vibe to his Monday nights, where ZuZu bar back Michele Freed will assist with shows. “Even before I worked there I hung out at ZuZu. Mostly I hope that Johnny’s bands get to play there more.”

For the last Night of the Living Deadhead on Nov. 25, Marrett gets his wish, as both of Allen’s bands—headband and Fedavees—will share the floor with Bobb Trimble’s Flying Spiders (hosting a live video premiere) in one more night of drunken love for one of the best scene-builders Cambridge has seen. Along with being one of the precious few free nights in town, ZuZu Mondays are booked by a guy who is not only the bartender, but also one of the biggest music fans in town. It’s all about sharing the love.

“After we played there, Johnny said something to me about how that was one of his favorite shows he had ever seen at ZuZu,” says Bobb Trimble (Flying Spiders, Jupiter Transmission). That’s quite a statement from Allen, whose Facebook alias “Edison Tesla” is known for meticulously archiving hand-drawn flyers and wonderful action photos (many which look like they are taken from standing on the bar) from years of shows. “He liked us so much that he was willing to sit in on drums one night at the Lilypad with no rehearsal. It was amazing.”

These echoes are heard far and wide across the Boston scene.

“Monday night is my favorite night of the week thanks to [Night of the Living],” says Mikey Holland (Mean Creek, Mikey French Fries, Trabants). “It’s my favorite spot and night in Boston. They feverishly work to get new bands into your head.”

Allen’s pairings of his favorite under-the-radar area bands with under-the radar touring bands are not only perfect for the chilled feel of a Monday night, but also something of a template for other area bookers.

“It was one of the only nights where you never had to worry about having a turnout because people would just show up regardless,” says Alex Marantz (Space Bums, Future Days, Fumehood, Golden Retriever). “It has to do with Johnny and Joes’ energy, the room itself, and the fact that it was free.”

While Monday’s at ZuZu will carry on in a different form under the guidance of Marrett, Allen will be moving on to some intermittent booking at Cambridge’s Lilypad, called “Odd Thursdays,” because he’ll be booking shows every other Thursday. ZuZu will miss him, and not surprisingly, he will miss it. But what will Johnny Allen miss most?

“I’ll miss seeing many people I love all in the same room at once — some playing, some watching, and most smiling,” he says.

Perry Eaton writes for Boston.com. Perry Eaton talks on the radio with me from time to time. Today, he talked to me about what he’s been listening to and some upcoming shows and festivals worth checking out. Click here to read more. END_OF_DOCUMENT_TOKEN_TO_BE_REPLACED

In some ways, Palehound has always had a home in Boston. END_OF_DOCUMENT_TOKEN_TO_BE_REPLACED

Kal Marks is the kind of band that sneaks up on you. Whether you’re experiencing them at some basement show in Allston, or in an opening set for Pile at Great Scott, you may not see them coming, but they’ll immediately click. The combination of heavy sludgy riffs and lead singer Carl Shane’s unique crooning bowls you over. It’s dark and it’s compelling, but most importantly, it’s really earnest. END_OF_DOCUMENT_TOKEN_TO_BE_REPLACED

It’s not very often that some of the most talented performers in Boston are set to grace the same stage in a single night. This Sunday marks the 1 year anniversary of Mind Spray, a local hip-hop open mic and showcase series devised by promotion and booking company The Brain Trust. END_OF_DOCUMENT_TOKEN_TO_BE_REPLACED

There’s been a lot written about Street Dogs evicting a group of neo-Nazis from the pit at their House of Blues, Anaheim show on St. Patrick’s Day. You don’t need to read any of it. Just listen to front man Mike McColgan tell the story. He talks about joining his old band, Dropkick Murphys, on stage in Boston last week, too. END_OF_DOCUMENT_TOKEN_TO_BE_REPLACED

It’s not her best. END_OF_DOCUMENT_TOKEN_TO_BE_REPLACED

When in Nashville, do as the locals do. Since relocating to Tennessee a few months ago, this seems to have been Steven Tyler of Aerosmith’s approach after announcing in an October Twitter Q&A session that he intended to record a country album, an endeavor he’s well in the process of completing. END_OF_DOCUMENT_TOKEN_TO_BE_REPLACED

“I’m Shipping Up To Boston” just turned ten years old. Boston.com’s Matt Juul put this piece together on the history and significance of the Dropkick Murphys song, then joined me in studio to talk about it. END_OF_DOCUMENT_TOKEN_TO_BE_REPLACED

Boston is a city known for it’s Irish heritage, and it’s celebration of it. Two main traditions have held strong in Boston: the St. Patrick’s Day Breakfast and subsequent Parade. But I argue there is a third now: seeing the Dropkick Murphys at the House of Blues during their multi-night March Residency. END_OF_DOCUMENT_TOKEN_TO_BE_REPLACED

Sure, you might see a punk show on Monday and a chillwave band on Thursday and so on, but usually you favor one sound over another because you’re a busy bee and time is honey. It’s been the same for years, and the Prefab Messiahs can vouch. END_OF_DOCUMENT_TOKEN_TO_BE_REPLACED