A scenic train ride through wine country Saturday turned sour for members of a local book club; they were kicked off the Napa Valley Wine Train for allegedly laughing too loudly.

Group leader Lisa Renee Johnson posted a video to Facebook right before embarking, saying “We made it! See ya’ll on the train!” A short way into the ride, she posted a photo, seemingly enjoying the trip.

But as it turns out, even the beginning of their train ride was bumpy. Despite allegedly booking the train tickets months in advance, the 11 women, all but one of whom are African-American, were given seats scattered throughout the car. According to an interview with KTVU, other patrons began complaining about the noise before the train even departed.

Soon after, things took a turn for the worse for the group, as they were asked to leave the train. 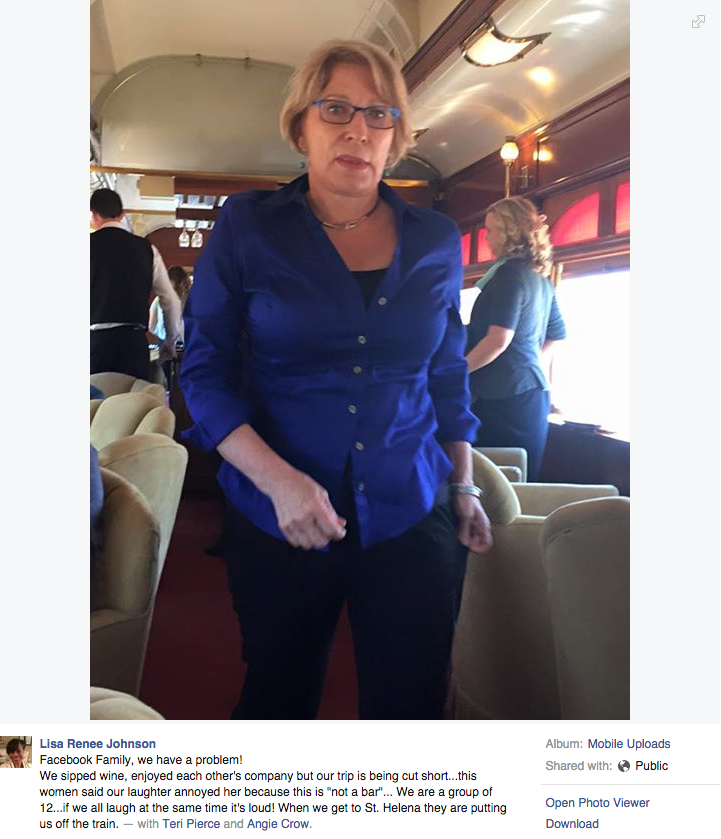 Despite Johnson saying that a large group of women laughing at the same time can be naturally loud, the group was escorted off the train to waiting police. 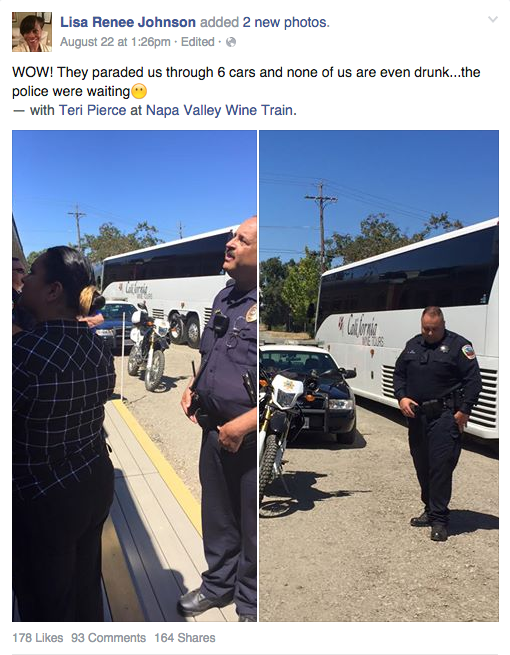 Johnson told KTVU she believes their ejection was racially motivated.”We didn’t do anything wrong,” she said. “And we still feel this is about race, we were singled out.” 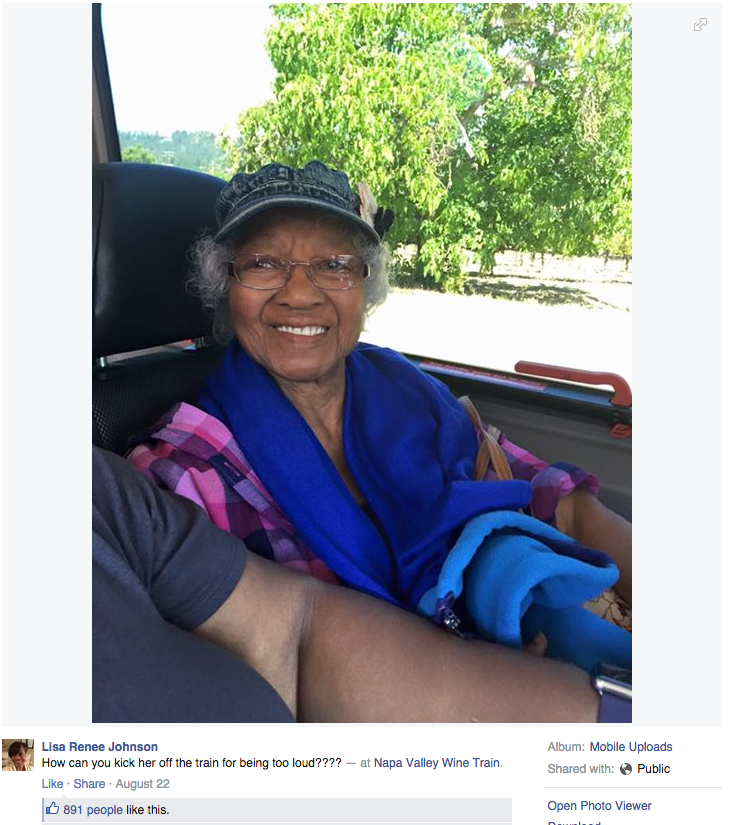 As news of the incident spread, people weighed in on Twitter using the hashtag #LaughingWhileBlack.

How d'you expect a group of 12 women to not get loud? Not everyone can be a restrained tight-ass middle-aged white woman #laughingwhileblack

One thing's for sure: conservative white guys r never loud when THEY drInk! Except for all those times when they drink #laughingwhileblack

Sam Singer, a public relations professional hired by Wine Train, told the AP that staff informed Johnson and her book group that they needed to quiet down or they would be asked to get off the train, offered a refund, and put on a bus back to the beginning of the route.

“The book club clearly was fun-loving, boisterous, and loud enough that it affected the experience of some of the passengers who were in the same car, who complained to staff,” he said.

On average, Singer said, individuals or groups are asked to get off the wine train once a month for one reason or the other. “It’s not a question of bias,” he said.

Johnson also posted a screenshot of a now-deleted post from Wine Train on the company’s Facebook page, which said that the group was physically and verbally abusive. In an interview with NBC Bay Area, Singer said that post was incorrect and made by a junior staffer. 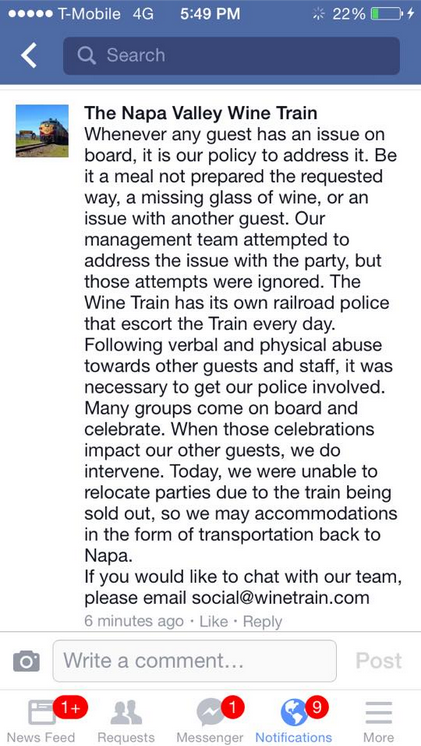 According to several publications, Anthony Giaccio, the CEO of Wine Train, issued a statement Tuesday afternoon apologizing to Johnson and the book group and accepting full responsibility for the incident.

“The Napa Valley Wine Train was 100 percent wrong in its handling of this issue,” Gaccio said in the statement. “We accept full responsibility for our failures and for the chain of events that led to this regrettable treatment of our guests.”

The Napa Valley Wine Train Yelp page has been flooded with negative comments, including one review from a woman posting as Danielle S. who claimed she was there during the incident.

“I watched in disbelief as staff harassed a group of people who were merely drinking wine and laughing,” she wrote. “I’d like to think it wasn’t a racially motivated act, but given the fact that other, non-black guests were behaving the same way and not removed, I can only conclude that it was discrimination. This business belongs in the ‘what is wrong with our country’ category.”

Enter to win a pair of tickets to attend The Hess Collection Seminar and Dinner as part of Boston Wine Festival 2018 at the Boston Harbor Hotel on Wednesday, March 14th. END_OF_DOCUMENT_TOKEN_TO_BE_REPLACED

This year, the festival is welcoming more female wine producers than ever before, making up 20% of all winemakers that will be at the festival. END_OF_DOCUMENT_TOKEN_TO_BE_REPLACED

The holidays are here, so raise a glass. END_OF_DOCUMENT_TOKEN_TO_BE_REPLACED

‘Tis the season to mix a nice, stiff drink. END_OF_DOCUMENT_TOKEN_TO_BE_REPLACED

Warm up with Tito’s on your sweater and Tito’s in your glass. END_OF_DOCUMENT_TOKEN_TO_BE_REPLACED

There’s a ton going on at Idle Hands in Malden this spring. Dan McDonnell and Josh Deering joined me in studio to talk about Maifest, what’s new in the Taproom, and their collaboration with The Black Ale Project. Oh, and don’t miss Idle Hands at BeerAdvocate’s Microbrew Invitational next month! END_OF_DOCUMENT_TOKEN_TO_BE_REPLACED

Giovanna Guzman is the marketing coordinator at Kings Bowl, who you can visit in the Back Bay, Burlington, Lynnfield, Dedham, and soon in the Seaport. We talked beverages, naturally, seeing as it’s Thirsty Thursday. And we sampled sangria. And it was soooo good. END_OF_DOCUMENT_TOKEN_TO_BE_REPLACED