Larry King Tweeting 35 Random Thoughts At 2 AM is Hilarious 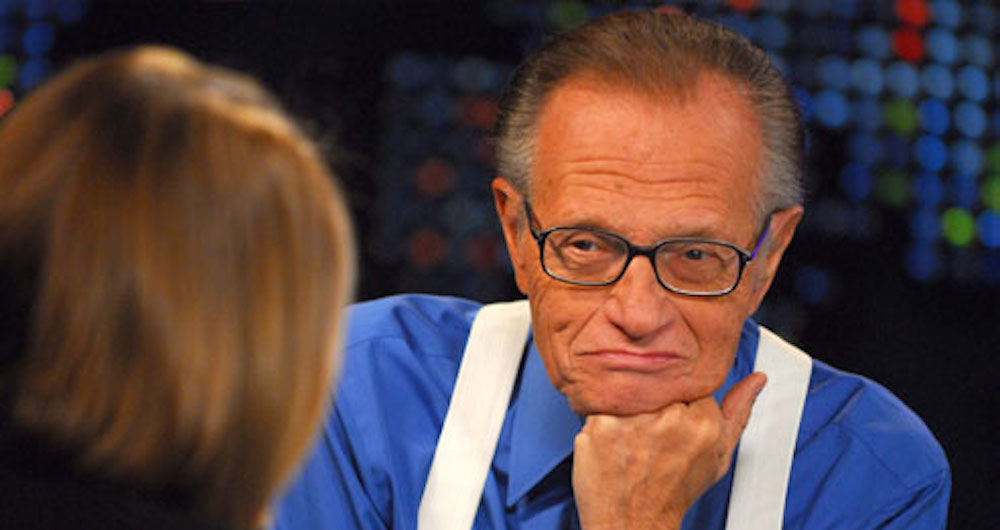 How is 81-year-old Larry King is better at Twitter than anyone I know? The former CNN star hosts an online talk show with four new episodes a week and still has time to tweet about everything from Jiffy Hoffa to Chinese Checkers at 2 AM.

Though I don’t agree with everything King has to say (Sorry Larry, I wasn’t really feeling Dane Cook’s new comedy special for some odd reason), he still dropped some real truth bombs. Here are my five favorite Larry tweets, as well as a list of the entire Tweetstorm.

Sub-point: I hate people with perfect teeth who never had braces even more.

Who in their right mind prefers Mickey to Donald? Bugs vs. Daffy is a real debate, but Mickey has zero defining characteristics. #TeamDonald all day.

Until the day some enterprising designer comes up with the business casual shorts for men, pairing a short-sleeve dress shirt or polo with khakis is tacky as all get-out.

I’m sometimes saddened that Watergate and the rise of 24-hour cable news networks means no one from this generation has a Walter Cronkite to reassure us in times of crisis as the de facto Most Trusted Man in America. But for those 2 hours I’m on a flight from Boston to Chicago, the gravelly tenor of my flight’s pilot will do. It doesn’t matter whether he’s telling me we’ve reached cruising altitude and will begin beverage service shortly or flying pigs will cause us minor turbulence, I’m soothed. King, as usual, knows what’s up.

Check below to read the entirety of King’s late-night musings.

This should never have happened. END_OF_DOCUMENT_TOKEN_TO_BE_REPLACED

I spend far too much time on Twitter. Here’s a handful of posts from last year that I found to be entertaining on one level or another. Enjoy. END_OF_DOCUMENT_TOKEN_TO_BE_REPLACED

Apologies in advance for burying this in your skull forever. END_OF_DOCUMENT_TOKEN_TO_BE_REPLACED

If you like cover songs, you’re gonna love this. And by love, we mean probably hate. END_OF_DOCUMENT_TOKEN_TO_BE_REPLACED

Whether you celebrate the unofficial beginning of summer on Memorial Day weekend, or Meteorological Summer on June 1, or the Summer Solstice, make no mistake: summer is here. END_OF_DOCUMENT_TOKEN_TO_BE_REPLACED

When he’s not running BostonTweet (or running the Boston Marathon), Tom O’Keefe is running around promoting Flutter. He was in studio with SumuApp co-founder Daniel Tewfik earlier today to talk about how you can win free rent for a year in Boston. END_OF_DOCUMENT_TOKEN_TO_BE_REPLACED

The nu-metal mainstays have covered the unlikeliest of songs. END_OF_DOCUMENT_TOKEN_TO_BE_REPLACED