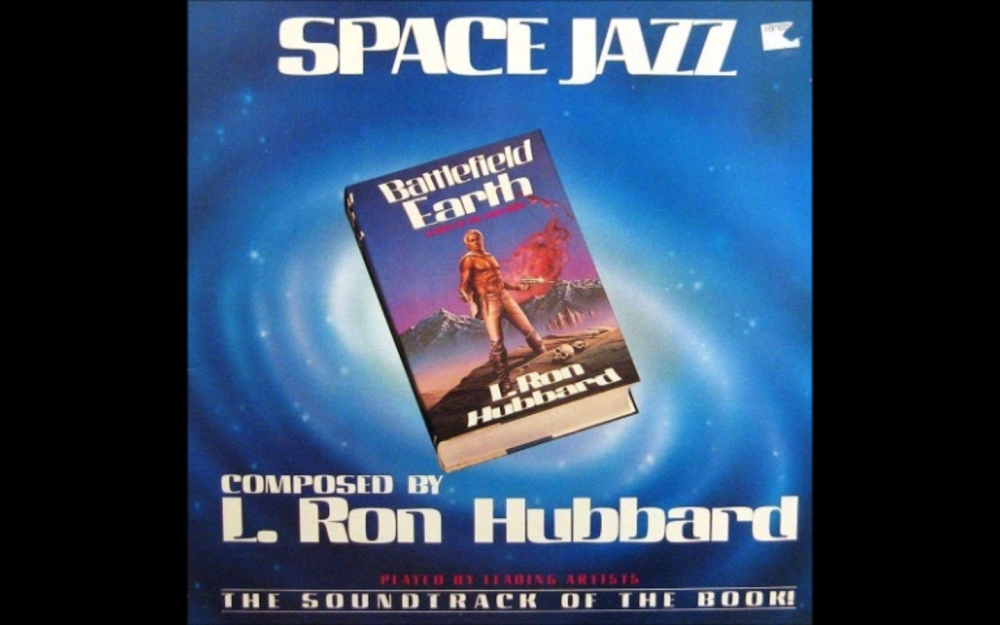 Scientology has been under a microscope even more than usual recently with the release of Alex Gibney’s documentary Going Clear, which shed new light on alleged activities taking place within the organization founded by sci-fi author L. Ron Hubbard in 1954.

When he wasn’t busy founding religions, Hubbard also composed an album to accompany the release of his 1982 book Battlefield Earth, appropriately named Space Jazz, the first known soundtrack for a book.

Unfortunately, even Hubbard’s OT transcendence levels weren’t enough to launch him into music stardom, but Space Jazz is worth the listen if only for the kitschy, madlin riffs and the themes for which the music was composed. Here are some select tracks:

Let’s warm up with the closing track of the two-disc (!) saga, “Earth, My Beautiful Home.”

“Windsplitter” features, for a reason that is likely justified at some point in the 1050-page monolith that is Battlefield Earth, a synthesized horse for the duration of the track.

Battlefield Earth would go on to become a feature film in 2000, though didn’t receive the greatest reviews. John Travolta, a notable scientologist, played the space villain.

The tepid reception of Space Jazz wasn’t about to stop L. Ron, though – two other albums were released posthumously in 1986 with his lyrics and composition at the helm. Hubbard and the church enlisted some of the biggest names in scientology and in Hollywood for his 1986 album The Road to Freedom. The whole album serves as a moderately catchy recruiting tool for the church during a time of high membership and controversy.

By far, the most memorable track of The Road to Freedom is sung by Frank Stallone, called “The Evil Purpose”:

Finally, fellow scientologist Karen Black volunteers her services in one of the most earnest tracks on the compilation, “The ARC Song.”

And let’s not forget what is arguably the most bearable installment of the LRH musical canon, 1986’s “Mission Earth,” performed by longtime scientologist Edgar Winter. The lyrics were composed entirely by the head of the Scientologist church, which could explain lyrics like “To Mission Earth I was assigned/ A planet that was seizure inclined.” The heady concept album is a marked musical improvement from its predecessor Space Jazz, but that’s a loaded comparison that isn’t worth getting into.

“Just a Kid” is catchy in its own saccharine way, and here’s a track that one reverent YouTube user referred to as “L. Ron’s ‘Hotel California.” If “Hotel California” had a sick trumpet solo, that is!

LRH was many things, and the chasm that exists between his vision and his execution is entertaining at best downright confusing at other points. Scientology continued to spread the word using somewhat catchy choruses after Hubbard’s death in early 1986. When current leader of the organization David Miscavige took over following his predecessor’s death, they produced the “We Are the World” of religious anthems, “We Stand Tall”:

Hey la di la, good luck getting this one out of your head. Scientology’s musical legacy is an interesting one that’s not often investigated, primarily because there’s so many areas of the religion that have provoked and fascinated those sitting outside of it.

Enter to win tickets to see Trio Da Kali at The Villa Victoria Center of the Arts (Newton, MA) on April 10th. END_OF_DOCUMENT_TOKEN_TO_BE_REPLACED

END_OF_DOCUMENT_TOKEN_TO_BE_REPLACED

Enter to win tickets to Rhye at The Paradise on February 28th. END_OF_DOCUMENT_TOKEN_TO_BE_REPLACED

Her new album has been pushed back, but we have Kimbra’s new single for you. END_OF_DOCUMENT_TOKEN_TO_BE_REPLACED

The folk duo returns with a new record this week. END_OF_DOCUMENT_TOKEN_TO_BE_REPLACED

Now that we’re done looking back at 2017, let’s look ahead at 2018. END_OF_DOCUMENT_TOKEN_TO_BE_REPLACED

Our first Song of the Week for 2018. END_OF_DOCUMENT_TOKEN_TO_BE_REPLACED

In a year when so many things were off, the music was right on. END_OF_DOCUMENT_TOKEN_TO_BE_REPLACED