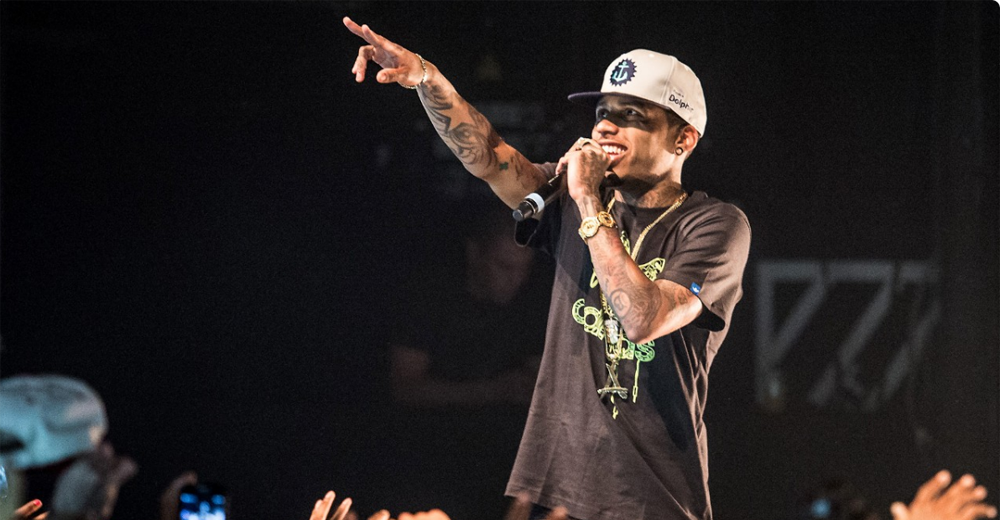 It’s almost unfair how spoiled we are this weekend. Touring band after touring band, all rolling through on the same weekend of a national pot-smoking holiday? Seriously, this was like the greatest coincidence ever. Anyway, there are more than enough shows to check out this weekend, the challenge will be choosing wisely.

Rap legend and Boogie Down Productions master KRS-One will be coming to Middle East Downstairs, but if you do not already have your tickets, you may be out of luck, as it is already sold out. Lucky for you, there are a whole bunch of other tasty offerings to choose from. Philly gaze rockers The War On Drugs will be at The Paradise, touring behind the band’s latest full-length, last month’s “Lost In The Dream” (with Sore Eros and White Laces; 8 p.m., $15, 18+). Brooklyn bar rockers The Hold Steady are teaming up with Providence bar lovers Deer Tick at House of Blues (8 p.m., $25, all ages). Rising Australian pop sensation Betty Who, whose song “Somebody Loves You” you may be hearing on recent DSW commercials, will be at Brighton Music Hall, and rest assured, it will be the last time you will see her at a venue this small (with Zak Waters and Cardiknox; 8 p.m., $12, 18+). Folk fans might dig S Carey, who will be at Great Scott (with White Hinterland and Words Like Earth at Great Scott; 9 p.m., $12, 18+)

Detroit-based producer Black Milk will appear at Middle East Downstairs, leading a massive hip hop bill (with Nat Turner + Roc Marciano, Evan Black, Oak Lonetree, Retrospek, Skye Major, F.A.M., and Champ Chuck And Magz; 8 p.m., $20, 18+). Brooklyn-based ambient loop-artist Julianna Barwick will head up a lovely experimental bill at the Middle East Upstairs for an early show (with Vasillus and Animal Hospital; 8 p.m., $10, 18+). For another electronic-based offering, stick around the Middle East to catch a set from local producer JSTJR among others (with G-Buck, Choppa Dunks, and Yung Travolta; 11 p.m., $10, 18+). For a poppier option, head to The Sinclair and catch British artist Dan Croll, who recently toured in support of Bastille (with Panama Wedding; 9 p.m., $15, 18+).

Saturday sounds like the perfect night to relax with a beer and some southern grime rock. Luckily, Atlanta madmen The Black Lips will be rolling through The Paradise in support of its latest “Underneath the Rainbow” along with Nashville rockers Natural Child who have a new album out as well (8 p.m., $16, 18+). London psych legends Loop will be at Middle East Downstairs, touring for the first time since ’91 (with Doug Tuttle and Ghost Box Orchestra; 8 p.m., $16, 18+). London alt-rockers Fanfarlo return to the States, making the trek behind February’s “Let’s Go Extinct” (with Lilies on Mars; 9 p.m., $16, 18+). If you’ve been jamming to a song on the radio called “Show Me,” that ditty is by an LA based rapper named Kid Ink who will be at House of Blues (with Bizzy Crook and King Los; 7 p.m., $20, all ages) Local electro rockers Animal Talk will take to Brighton Music Hall for a late night show to celebrate the release of its new EP, “Kid” (with Miss Geo and DJ Moe Pope; 11 p.m., free with RSVP, 21+). And if you’re looking for a one-of-a-kind experience, look no further than Church, where a pizza-themed Velvet Underground cover band called The Pizza Underground, led by Macaulay Culkin, will play an early show (with Toby Goodshank; 6 p.m., $15, 21+)

Remember Hellogoodbye? They got a pretty indie makeover and will be coming to with Philly pop studs Vacationer and Brooklyn electropop outfit Heavenly Beat at Brighton Music Hall (7 p.m., $15, 18+) Portland, OR garage rock weirdos White Fang and Nashville gang Denney and the Jets will play at Middle East Upstairs amongst a fine batch of local youngsters (with Earthquake Party!, Nice Guys, and Free Pizza; 7 p.m., $10, 18+) Real Estate side project Alex Bleeker and the Freaks will lead a bill at The Middlesex (with CreaturoS and Emerald Comets; 9 p.m., $5, 18+). And it’s likely no coincidence that Green Side Up Gallery chose to have its customer appreciation day on 4/20, featuring local funk collective Viva La Hop and more at Great Scott (with Dub Apocalypse, Otis Grove, Rapplesauce, Dillon N’ Ashe, Love Project, Dubbest, and DJ Niko; 12 p.m., $10 donation, 18+)

Enter to win tickets to see Trio Da Kali at The Villa Victoria Center of the Arts (Newton, MA) on April 10th. END_OF_DOCUMENT_TOKEN_TO_BE_REPLACED

END_OF_DOCUMENT_TOKEN_TO_BE_REPLACED

Enter to win tickets to Rhye at The Paradise on February 28th. END_OF_DOCUMENT_TOKEN_TO_BE_REPLACED

END_OF_DOCUMENT_TOKEN_TO_BE_REPLACED

Enter to win a pair of tickets to attend The Hess Collection Seminar and Dinner as part of Boston Wine Festival 2018 at the Boston Harbor Hotel on Wednesday, March 14th. END_OF_DOCUMENT_TOKEN_TO_BE_REPLACED

Her new album has been pushed back, but we have Kimbra’s new single for you. END_OF_DOCUMENT_TOKEN_TO_BE_REPLACED

The folk duo returns with a new record this week. END_OF_DOCUMENT_TOKEN_TO_BE_REPLACED

Now that we’re done looking back at 2017, let’s look ahead at 2018. END_OF_DOCUMENT_TOKEN_TO_BE_REPLACED