Watch the full video here, and prepare for a ton of visual stimulation:

She goes right in on “Roar.” This will not be the last time she opts for very obvious (but cool) imagery. 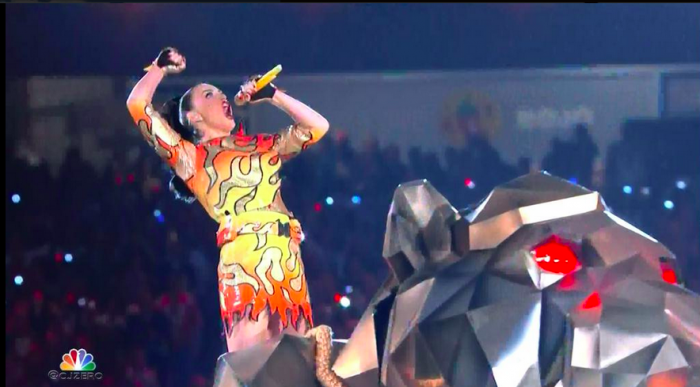 This huge puppet was manned by what appeared to be twenty people clad completely in black. We imagine their conversation went something like this:

Next, Perry we moved onto a series of dancers wearing these chrome horse heads for “Dark Horse,” because Katy’s face is the only face and any threat to her Guy Fieri leisure suit WILL NOT STAND. 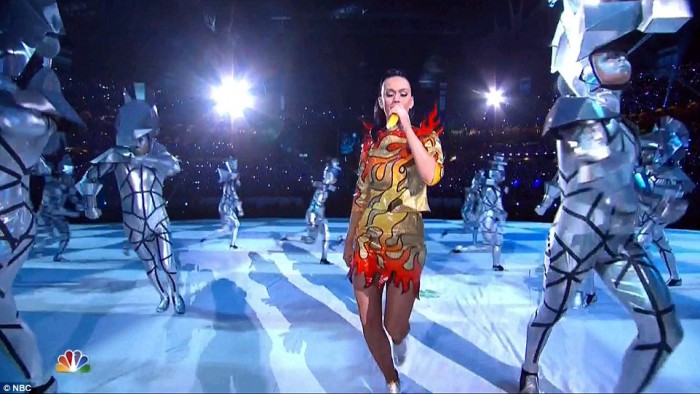 Next, she and Lenny Kravitz took on “I Kissed a Girl,” even though it’s only controversial when she sings it in 2006, and not when either of us sing it now. Pass the cherry chapstick regardless.

Many Twitter users couldn’t help but notice her dress’s resemblance to the Hot Dog Stick fast food chain, but the relevant part is that the whole thing took place in a fever dream landscape where sharks can sing and beach balls vaguely resemble the M&M mascots.

Unlike the puppeteers, these guys are majorly on board and completely terrifying.

Then, SURPRISE, it’s Missy Elliot singing “Work It.” This part was good!

Finally, Katy sings “Firework,” and, in case you are wondering, YES there were real fireworks because of course there were.

Many folks on Twitter pointed to the fact that the “firework” Katy rode looked really familiar.

Katy Perry right now looks like she has just delivered a "The More You Know" PSA. #Halftime pic.twitter.com/I4FaooKv3B

All jokes aside, the Super Bowl halftime show is supposed to be big and shiny. This year’s delivered. Congrats, Katy Perry!

Today is for this girl. She had the dream, always believed in herself & her worth. Today she is the one smiling. pic.twitter.com/9jMh3hWubz

The 2013 headliner salutes you.

Always a pleasure to have Boston.com’s Perry Eaton in studio for a chat. After we talked a bit about Pearl Jam at Fenway and Perry’s new podcast, he filled us in on Game of Thrones live and Narragansett’s new Bananagrams-themed brew. END_OF_DOCUMENT_TOKEN_TO_BE_REPLACED

No, not from afar, from the comfort of her couch. From the actual awards themselves. That’s where Meredith Goldstein was for the Oscars. She shared all the juicy, first-hand details with me. END_OF_DOCUMENT_TOKEN_TO_BE_REPLACED

It was wonderful having our good friend Meredith Goldstein back in studio this morning. She dug into the latest edition of Love Letters, which prompted us to play this song. And of course we had to discuss the Oscars. Make sure you’re following Meredith on Twitter, as she’ll be live-tweeting the awards this Sunday night. END_OF_DOCUMENT_TOKEN_TO_BE_REPLACED

Our first edition of TV Sets for 2016 might be better than every edition from 2015. END_OF_DOCUMENT_TOKEN_TO_BE_REPLACED