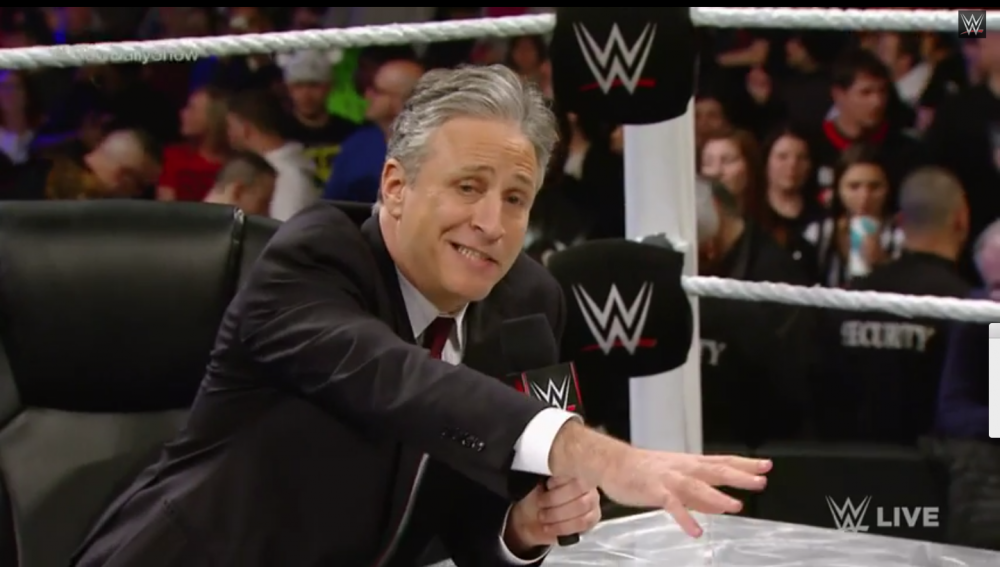 Well, it looks as if Jon Stewart is making the most of his last months at The Daily Show with a series of bizarre appearances, including his crotch-kicking fantastic moment at WWE Monday Night Raw.

What you need to know: Jon Stewart kicked Seth Rollins in the balls.

What you might not know: he did it for charity.

Stewart is currently in the throes of promoting the “Night of Too Many Stars” special on Comedy Central, which uses his satirical powers for good and raises millions of dollars annually for autism programs across the US.  WWE couldn’t hand a plug to him that easily, though – instead, he and wrestler Seth Rollins struck up a fake rivalry in classic WWE style and fought dirty.

It all began on February 16, when Rollins called Stewart out as a subpar host on Monday Night Raw:

Gauntlet so thrown, Stewart defended his throne as the king of the satirical newscast with an equally silly, scripted retort:

Rollins can’t contractually take that sitting down, and so the battle continued last Thursday on The Daily Show, where Rollins yanked Stewart into a headlock:

On the same show, Rollins issued Stewart the ultimate challenge of appearing on Monday Night Raw this week, one the Daily Show host meekly accepted in an inauthentic scripted feud that only the WWE could produce.

Finally, the night arrived, and Rollins riffed on Stewart in a fake Daily Show broadcast he hosted:

“Jon Stewart… he talked a pretty tough game when I was on his turf, but since then, much like the audience when he hosted the Oscars last year, he’s been dead silent. What do you know? A wuss who’s also a phony? But guys, I really shouldn’t be surprised. He’s from New Jersey.”

Enter Stewart, never one to give a burly meathead the last word.

“I have something you’ll never have: Respect,” he told Rollins.

Rollins begins to jostle Stewart around until:

I’m sorry, can we see that one more time?

Then, in true fight or flight fashion, Stewart gets the hell out of there:

Last night’s madness can be viewed in its entirety here:

Always a pleasure to have Boston.com’s Perry Eaton in studio for a chat. After we talked a bit about Pearl Jam at Fenway and Perry’s new podcast, he filled us in on Game of Thrones live and Narragansett’s new Bananagrams-themed brew. END_OF_DOCUMENT_TOKEN_TO_BE_REPLACED

No, not from afar, from the comfort of her couch. From the actual awards themselves. That’s where Meredith Goldstein was for the Oscars. She shared all the juicy, first-hand details with me. END_OF_DOCUMENT_TOKEN_TO_BE_REPLACED

It was wonderful having our good friend Meredith Goldstein back in studio this morning. She dug into the latest edition of Love Letters, which prompted us to play this song. And of course we had to discuss the Oscars. Make sure you’re following Meredith on Twitter, as she’ll be live-tweeting the awards this Sunday night. END_OF_DOCUMENT_TOKEN_TO_BE_REPLACED

Our first edition of TV Sets for 2016 might be better than every edition from 2015. END_OF_DOCUMENT_TOKEN_TO_BE_REPLACED