A gay couple owns JebBushForPresident.com and uses it for the best reason

Disappointed with their rights as a gay couple, engineers Charlie Rainwater and C.J. Phillips put their high tech skills to use. They bought JebBushForPresident.com.

Rainwater and Phillips first purchased the Jeb Bush domain in 2008 in response to some political setbacks for the LGBTQ community. For only $8 a year, the couple has been able to use the namesake of a politician as a forum for dialogue.

“Jeb’s horrible record with regards to LGBTQ rights was the first thing that led us to buying the website name,” CJ Phillips told BDCwire. “The second was the horrid legislation that Texas had passed for same sex couples, which would effectively allow anyone with an axe to grind the power to go to court and challenge any legal documents the couple my have simply because they were in a relationship that mimicked marriage.”

Shortly after President Obama’s presidential victory, an internet meme made the rounds suggesting Jeb Bush would be a contender in the next election.

“Charlie wondered aloud how ironic it would be to use Jeb’s name for a blog about social justice,” Phillips said. “Ten minutes later we had purchased JebBushForPresident.com.”

And a socially conscious blog is exactly what the site has become. With the intention to prompt “understanding, insight and healthy dialogue,” CJ and Charlie regularly share blog posts that discuss issues affecting the LGBTQ community. A “tribe” section allows, er, supporters of JebBushForPresident.com to share their names and photos.

Their reasons for starting the site aside, CJ and Charlie have no intention of allowing it to become a “bash” site.

“We won’t tell folks who they should vote for but we will be encouraging everyone to get out and vote. Going forward, we hope to expand the site a bit as we grow: sharing how women and minorities are also affected and how active discrimination still is in the country.”

But has the Jeb Bush campaign reached out to CJ and Charlie? 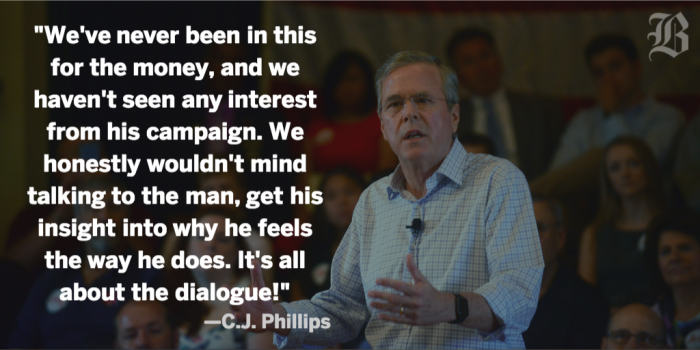