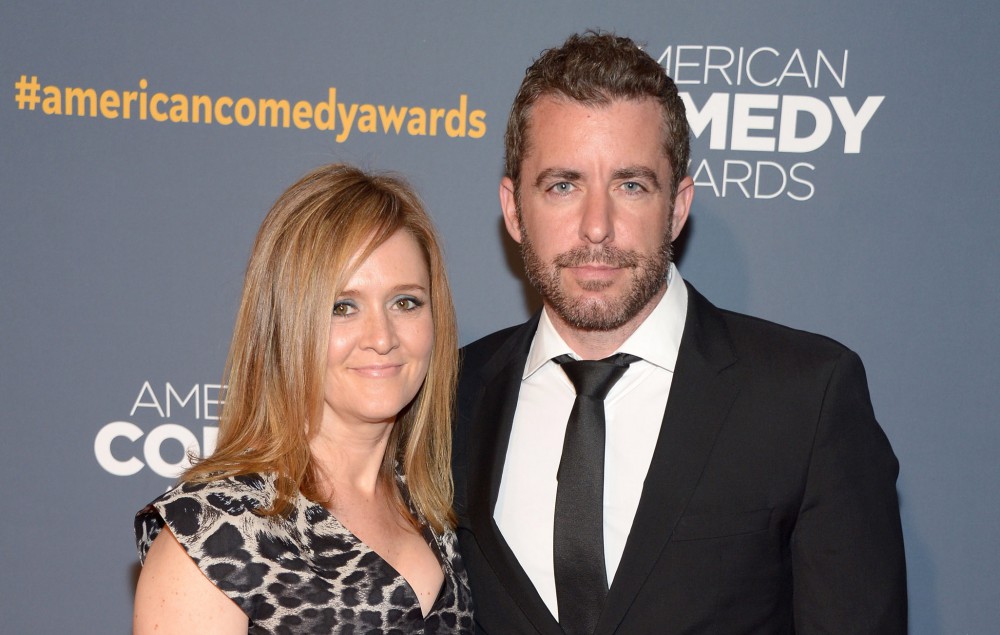 As the Internet continues to frantically speculate who will take over for Jon Stewart upon his departure from The Daily Show, another major contender for the role has voluntarily removed herself from the ring – longtime correspondent and producer Samantha Bee announced yesterday that she will be leaving the show to take her talents to TBS.

While it’s not exactly clear what show Bee will be hosting on her next adventure, it does sound like a spin on what she’s already familiar with on The Daily Show – a press release described the project as “a platform for Bee to apply her smart and satirical point of view to current and relevant issues.”

This news arrives on the heels of her husband and fellow correspondent Jason Jones’ announcement that he would depart for the same network just a few weeks ago, embarking on a new semi-autobiographical sitcom he plans to make for TBS that Bee will co-produce.

Brett Weitz, TBS’s executive vice president of original programming, is thrilled to have the married couple onboard for new content on the station.

“We actually have their kids coming in next week to pitch us animation,” Weitz joked.

In terms of future TDS hosts, this removes Jones, Bee and Jessica Williams from the running in the past number of weeks. Even after a lot of support was thrown Williams’ way for taking over, she has announced time and time again that it’s not something she’s interested in pursuing.

Who does this leave as an heir? John Oliver has renewed his contract with his inimitable HBO vehicle Last Week Tonight, former correspondents like Kristen Schaal, Wyatt Cenac and John Hodgman have moved on to successful careers in other corners of the comedy world, and newer correspondents like Jordan Klepper and Hasan Minhaj are too green to be considered. Colbert and Carell are too busy dominating the comedy world as we know it. Other middling correspondents like Al Madrigal or Aasif Mandvhi would be valid choices as well, but they’re both tied up in independent projects of their own that would need to be dropped.

So what gives? Will anyone be able to inherit the institution at all, or is it smarter for Comedy Central to call the show off altogether?

Personally, I’m Team Hodgman – he’s different enough from Stewart that he wouldn’t come off as a wannabe, and has a unique enough point of view to keep the show afloat based on strong opinions and complete and total weirdness.

No matter who inherits the Stewart throne, we’re thrilled that Bee is forging her own – can’t wait to see what you do with the place, Sam.

Comedian Myq Kaplan is a comedian named Myq Kaplan. He joined me in studio this afternoon, and he’s at Laugh Boston this weekend. Click here for tickets. END_OF_DOCUMENT_TOKEN_TO_BE_REPLACED

My goodness, I love Sue Costello. It was great having her back in studio today to talk about her one-woman show, #IAmSueCostello, playing tonight at the Revere Hotel. Click here for tickets. END_OF_DOCUMENT_TOKEN_TO_BE_REPLACED

Trump Takes On…Boston! is running now through election night at Laugh Boston. David Carl was back in studio this afternoon to talk about bringing Donald Trump to the stage, the cathartic element (for both him and the audience) and how audiences have been reacting so far. END_OF_DOCUMENT_TOKEN_TO_BE_REPLACED

Trump Takes On…Boston! has arrived at Laugh Boston. I had comedian David Carl, who is portraying Trump, in studio this morning to talk about the show. END_OF_DOCUMENT_TOKEN_TO_BE_REPLACED

Lachlan Patterson made me laugh this morning. Let him make you laugh this weekend at Laugh Boston. Click here for tickets, and click “more” to hear our conversation. END_OF_DOCUMENT_TOKEN_TO_BE_REPLACED

Always a pleasure to have Boston.com’s Perry Eaton in studio for a chat. After we talked a bit about Pearl Jam at Fenway and Perry’s new podcast, he filled us in on Game of Thrones live and Narragansett’s new Bananagrams-themed brew. END_OF_DOCUMENT_TOKEN_TO_BE_REPLACED

It was great to have Alonzo Bodden back in the RadioBDC studio this morning. Don’t miss him at Laugh Boston this weekend! Click here for tickets and info, then click through to hear my interview. END_OF_DOCUMENT_TOKEN_TO_BE_REPLACED