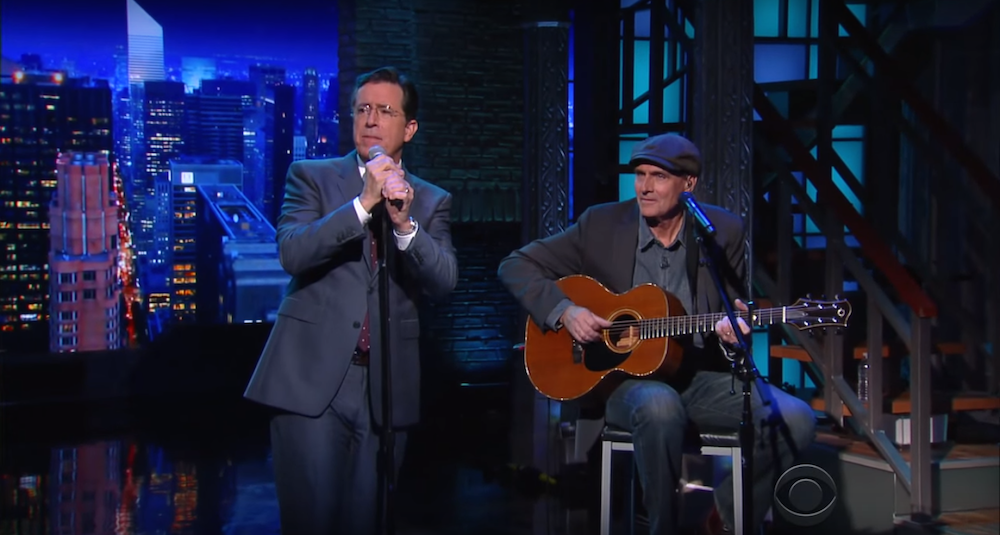 Legendary singer-songwriter and Boston native James Taylor has long said his song “Fire and Rain” was about the suicide of Taylor’s childhood friend Suzanne Schnerr, his battles with drug addiction and depression, and acclimation to his growing fame. But when Taylor stopped by The Late Show with Stephen Colbert last night, his explanation of the song’s origins had a very different vibe.

According to Taylor, he never stops writing songs. And in the 47 years since he started writing “Fire and Rain” — with its iconic refrain, “I’ve seen fire and I’ve seen rain / I’ve seen sunny days that I thought would never end” — he’s seen a lot more things he wants to sing about.

“I just hadn’t seen that much back then, mostly fire and rain,” Taylor told Colbert in a flawless deadpan. “That’s why i keep saying it over and over again in the song.”

But Taylor has seen plenty more since the song’s release, and now he says he’s added over 75 new verses about all the things he’s seen, including man buns, MySpace, the Baja Men, and “those pizzas that are folded over on the edges and are crimped with a fork.”

“Calzone, yeah,” Taylor said. “I hadn’t seen those back then, but if I had I definitely would have added them to the song.”

Obviously Taylor’s modernized “Fire and Rain” performance was a joke, but if he wants to sing 75 verses about Snakes on a Plane and two-in-one shampoo-conditioner in the future, we’re more than happy to listen.

Check out the full video below: