Is Waltham Really the Drunkest City in America? (Probably Not) 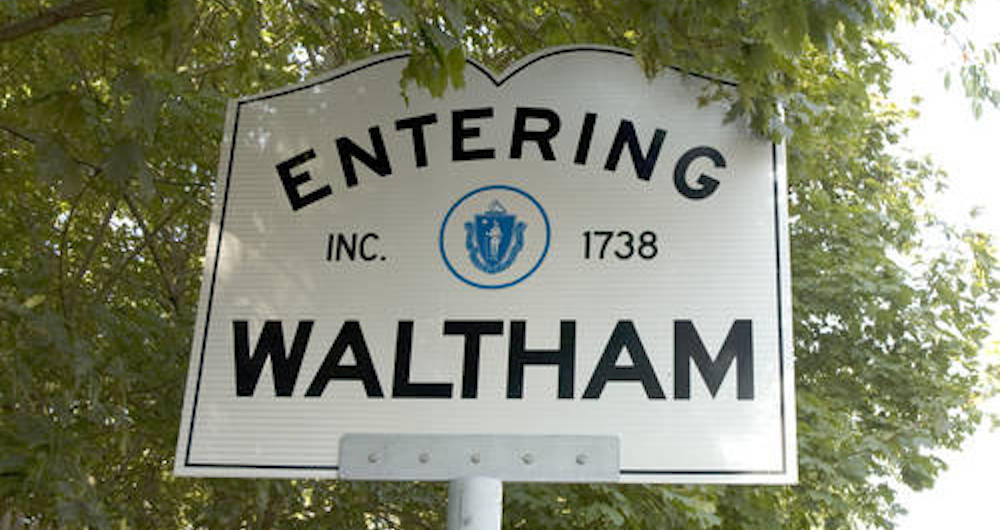 BACtrack, a portable breathalyzer company that uses smartphone integration to keep its customers safe, has released data from its almost 300,000 breathalyzer tests nationwide in 2014. Some results aren’t surprising: the drunkest days of the year are St. Patrick’s Day and New Years Eve. Much more surprising? The highest average BAC in all of America during the month of December is from Waltham, Massachusetts.

BACtrack’s consumption report shows that 14 of the 15 biggest drinking days of the year occur in the winter months — the only outlier being May 3rd, which fell on the weekend before Cinco de Mayo. Besides obvious picks like New Years Eve and Super Bowl Sunday, the day after Valentine’s Day showed an especially high BAC, with 0.092, suggesting perhaps lovelorn singles turned to spirits after another V-Day alone.

So, is Waltham really the drunkest city in America? Probably not — and here’s some rough back-of-the-envelope math to prove it.

Even though (almost) 300,000 breathalyzer measurements nationwide sounds impressive, breaking the data down proves how little a sample size that truly is. 300,000 divided by 50 states is 6,000 per state – though there’s probably more tests in bigger states. Since Massachusetts has the 14th-highest population, let’s generously say BACtrack collected 12,000 samples from the Bay State, though it’s probably less. 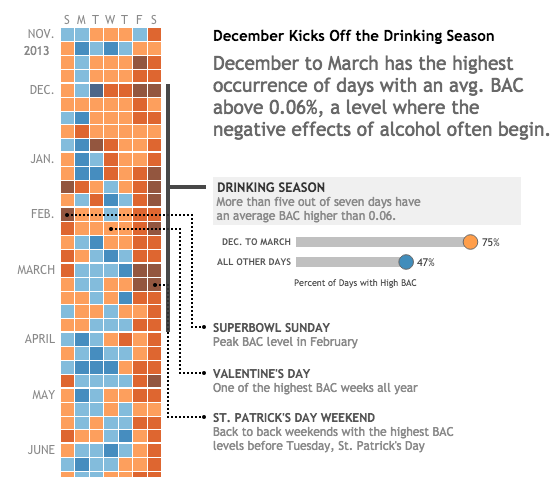 Let’s be generous again just to be safe and say that Waltham is more likely to use BACtrack because its proximity to Boston means it’s more plugged in and likely to use tech-savvy stuff like a smartphone-enabled breathalyzer. Even with 20 measurements in the month of December, that’s a tiny sample.

And if you’re using a handy pocket breathalyzer, are you really only using it once per night? Someone with a BAC of 0.133%, more than one and a half times the legal limit, is probably blowing once an hour to make sure their BAC is going down. So now the more likely picture is four or five people using the breathalyzer for or five times each in a single boozy night in December giving Waltham the ignominious distinction of the booziest holiday drinkers in the nation.

The moral of the story? Always look beyond the charts to see what the numbers really mean. But just in case Waltham residents (or anyone else reading) really are throwing back spiked eggnog after spiked eggnog this holiday season, please use a designated driver so a portable breathalyzer doesn’t even have to come into the picture.

Enter to win a pair of tickets to attend The Hess Collection Seminar and Dinner as part of Boston Wine Festival 2018 at the Boston Harbor Hotel on Wednesday, March 14th. END_OF_DOCUMENT_TOKEN_TO_BE_REPLACED

This year, the festival is welcoming more female wine producers than ever before, making up 20% of all winemakers that will be at the festival. END_OF_DOCUMENT_TOKEN_TO_BE_REPLACED

Troy Clarke has quite a few titles. END_OF_DOCUMENT_TOKEN_TO_BE_REPLACED

The holidays are here, so raise a glass. END_OF_DOCUMENT_TOKEN_TO_BE_REPLACED

‘Tis the season to mix a nice, stiff drink. END_OF_DOCUMENT_TOKEN_TO_BE_REPLACED

Warm up with Tito’s on your sweater and Tito’s in your glass. END_OF_DOCUMENT_TOKEN_TO_BE_REPLACED

Adam Szucs recently joined Committee as Beverage Director. He joined me on Thursday Thursday to mix up three amazing cocktails: Meet Your Maker’s, Something For Your Soul, and Mal de Ojo. END_OF_DOCUMENT_TOKEN_TO_BE_REPLACED

There’s a ton going on at Idle Hands in Malden this spring. Dan McDonnell and Josh Deering joined me in studio to talk about Maifest, what’s new in the Taproom, and their collaboration with The Black Ale Project. Oh, and don’t miss Idle Hands at BeerAdvocate’s Microbrew Invitational next month! END_OF_DOCUMENT_TOKEN_TO_BE_REPLACED