Interview: Mekhi Phifer and Maggie Q talk about the hype around ‘Divergent’ 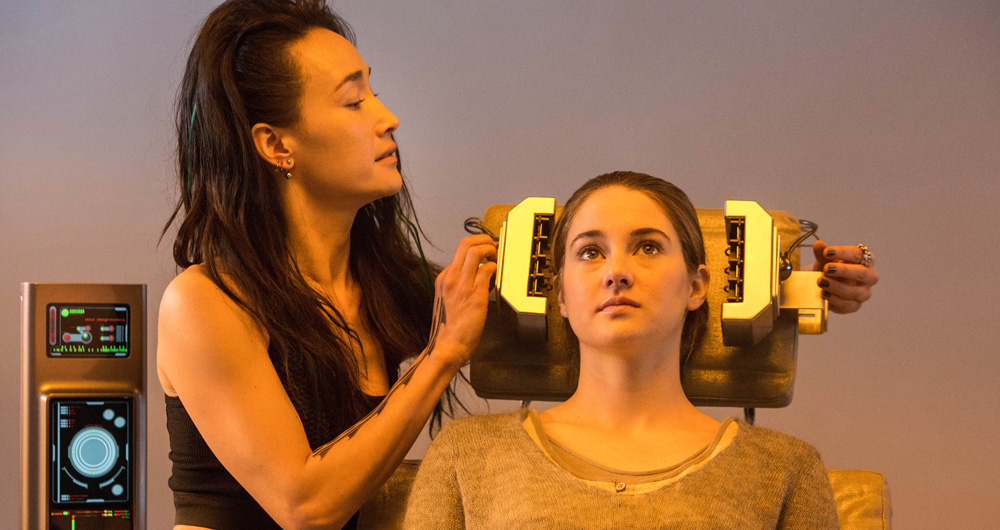 Just in case you haven’t heard, “Divergent,” the latest teen epic (à la the newest “Hunger Games” trilogy) was released to the world this weekend. Plug your ears because throngs of young girls have already started to scream, but if you don’t understand what all the hype is about, we heard it straight to some of the stars of “Divergent.” We sat down with Mekhi Phifer and Maggie Q to get the gist of the movie, see what the hell all the noise is about, and how this film is expected to kick ass at the box office.

“Divergent” is set in Chicago in the year 2164 where all the citizens are divided up into five political parties, or factions, based on their personalities. But Beatrice “Tris” Prior (Shailene Woodley), who chooses the Dauntless Party (comprised of fearless warriors), doesn’t truly belong there, as she discovers she is a Divergent. Being Divergent is dangerous, as she does not conform to society or any one faction. Luckily, her strength and fearlessness have helped her bond and find a confidant in her teacher, Four (Theo James). Although thought of as an action movie, it really diverges into a coming of age romantic drama.

The film, based on the bestselling young adult book series of the same name, is expected to break box office records due to its loyal fan following and the similar appeal of “The Hunger Games” or “Twilight” sagas. Mekhi Phifer explains, “My son knows about [the book] though. He’s 14 years old, so he was all over it and this is the first project that I have done in my career that he’s excited about.”

Both actors are grateful to be a part of a project that is projected to do so well, but neither is taking it for granted nor expecting it to happen. Maggie Q said, “we have not been in this position, Mekhi and I, that’s for sure….Even when you’re on, set they were kind of talking to us about [it]… are you ready for this? I was like ready for what?” Maggie Q is surprised with young fanfare.

“It’s weird for kids to be excited. That’s a trip you know when an 11 year old is like, ‘I can’t wait,’ and you’re like, ‘how do you know me?’ All the movies that I do are R [rated] and more for adult.” Mekhi added, “I don’t know if you are ever fully prepared for that, because there are so many unknown variables to [box office success with a film]….[For] ‘Star Wars’ they were thinking that George Lucas was going to get left out of the business, and it became one of the biggest franchises of all time. So you never really know until you get there.” He is grateful, saying, “it is definitely a blessing to be a part of something of this magnitude. There is no question that people have worked their whole career [and may] never get to do a film as big as this one…especially with sequels. Obviously we’ve had illustrious careers, but this is the first time doing a film where it’s a sequel….So I’m looking forward to seeing the reaction.”

Both Mekhi Phifer, who plays Max ,the leader of Dauntless, and Maggie Q, who plays a tattoo artist Tori, have relative small role supporting roles in this first movie of the trilogy. “[There are] a lot of characters in the first one [movie, but] obviously we’re following Shailene, following Theo, and their whole journey. And you sort of get a sprinkling of these other characters and you kind of get to see who they are. So I’m looking forward to seeing what they’re going to do with the next one.” He goes on to say,” we haven’t really gotten to the full extent to who our characters are. We are sort of set up in the first one. We’ll see where they take us in the second one. You know, I haven’t read that script yet, so kind of what you see is what you get so far as my character is concerned, and we’ll see what happens next.”

Maggie Q is quick to point out that not only is the story of their characters expected to grow as the film series continues, but more action and adventure is expected as the trilogy expands. She said, “this is not really an action film, to be very honest. Like, I’ve done action films. This is not an action film.” Maggie Q explained that this film is more than that. “There is some fighting, which is nice, and it pushes the story forward….It’s not like action-oriented or anything, so I don’t know if [the actors] really had a boot camp or anything. [But] the second one will be a lot more.”

“I like… the strength of the trilogy.” She adds that this film’s theme, unlike other teen sagas of the recent past, goes beyond the young-girl-kicking-ass cliché. “What I love about this film is that it is not one of those, you know, strong-woman-porn [type films as of late],” she says. She adds, “I think the strengths of the Tris’s character… when they are really strong to me in the film, is when they’re extremely vulnerable and I feel that this film has real emotional beats.” For her own character, “Even Tori, in her sort of armor… decides to let [Tris] in and tell her a little bit. Those are the moments of strength from me. This is true strength when you can step back a little bit and have an experience with someone else, and I’m going to let them in because that’s a lot harder to do.”

So will they be getting any action figures or dolls? Maggie and Mekhi jokingly agreed that they won’t mind having a Lego figure made of their characters, with Phifer joking, “we should yeah, and I want some merchandising dollars as well.”

Golden Globe and Emmy nominee Benjamin Wallfisch is the composer responsible for the score of the hit movie IT. I talked to Ben about his approach to scoring the new version of this iconic story and his thoughts on film and music overall. Some very insightful commentary; listen in. END_OF_DOCUMENT_TOKEN_TO_BE_REPLACED

Rupert Gregson-Williams is an award-winning film composer. He just so happened to compose the score for this summer’s big blockbuster Wonder Woman. We talked about his beginnings in film scoring, film scores that move and inspire him and, of course, Wonder Woman. END_OF_DOCUMENT_TOKEN_TO_BE_REPLACED

Jeff Rapsis is a New England-based composer and performer. Lately, he’s been creating live musical scores for silent film screenings. I talked to him about his process and a few of his upcoming performances at The Capitol Theatre in Arlington and the Somerville Theatre. You can keep track of where else Jeff is scoring silent films here. END_OF_DOCUMENT_TOKEN_TO_BE_REPLACED

Planning on seeing Rogue One: A Star Wars Story when it opens this weekend? I joined Adam 12 to give you an idea of what to expect. But don’t worry, I didn’t give anything away. END_OF_DOCUMENT_TOKEN_TO_BE_REPLACED

No, not from afar, from the comfort of her couch. From the actual awards themselves. That’s where Meredith Goldstein was for the Oscars. She shared all the juicy, first-hand details with me. END_OF_DOCUMENT_TOKEN_TO_BE_REPLACED

To celebrate the opening of ‘The Force Awakens,’ I had some very special guests in studio to start the Thursday, December 17 edition of The Brink. Listen. END_OF_DOCUMENT_TOKEN_TO_BE_REPLACED

Watching the new Star Wars trailer a million times gave us all sorts of feels. And one of those feels was nostalgia. END_OF_DOCUMENT_TOKEN_TO_BE_REPLACED

END_OF_DOCUMENT_TOKEN_TO_BE_REPLACED

If you’ve finally finished crying over Inside Out — or Lava, the short that ran before it — Pixar is readying another assault on your tear ducts with The Good Dinosaur, if its newly released trailer is any indication. END_OF_DOCUMENT_TOKEN_TO_BE_REPLACED