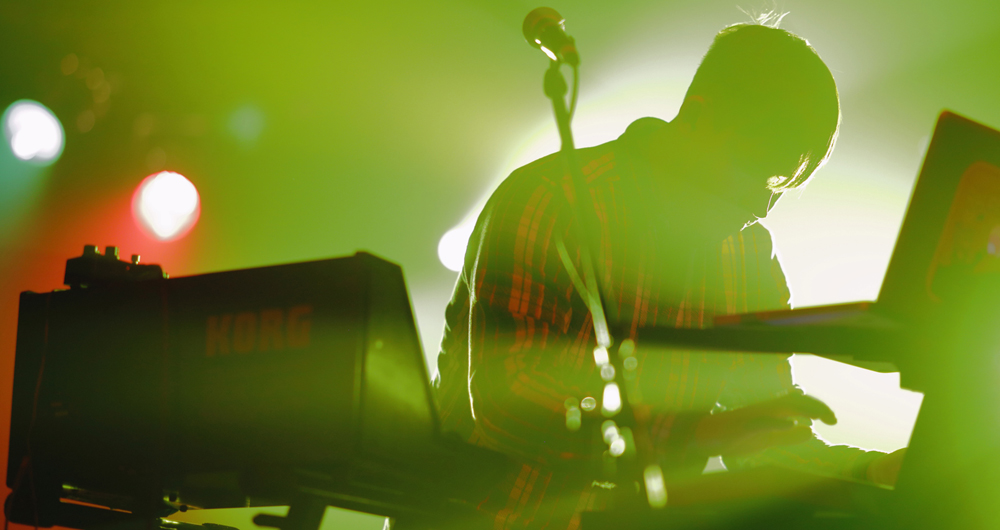 Many electronic music producers strive to make genre-bending music, but Eliot Lipp is known for actually doing it well. The Brooklyn via Chicago via San Francisco via Tacoma, WA musician has mastered a warm, analogue synth-laden signature sound steeped in jazz, funk, synthpop, and hip hop influences and inspired by the many places he’s called home.

He doesn’t mind settling on electro-funk to describe his genre, but really, he’s worked his way into that sweet spot where his music is really just Eliot Lipp. Over the phone from his hometown, Tacoma, where he’s regrouping before joining indie hip hop outfit The Grouch and Eligh on tour, Lipp tells me that after over ten years of producing, he keeps his sound fresh by approaching electronic music as a student, always seeking out new knowledge, skills, and challenges.

Recently, as he has wrapped up two years of work on his forthcoming album, he’s been studying Beethoven and Dvořák. “Six months ago I started sampling from all these classical records and it just got me into it…. I’m just thinking about the melodies. A lot of times I’ll sample stuff and then start writing music to it and I’ll just end up deleting the sample and just keeping what I wrote on top of it. It’s fun to do that with classical music because its so much more difficult… there is so much more going on.”

Lipp grew up on his dad’s Pink Floyd and Miles Davis records. As a teenager he played drums in punk bands—as all future electronic music producers probably should—and, around the same time, he started experimenting with making hip hop beats for rapper friends. He was influenced by producers like, Madlib, Pete Rock, and J Dilla: “producers who would always give that human feel to their beats. Even though everything is made on samplers and made digitally it still always had that live band vibe.”

Whatever turns his sound takes from project to project, it’s always been important to Lipp that he captures that elusive “live vibe” that inspired him early on. “I feel like even though I make electronic music—I would even call it “EDM”—I still try to give it a human element. I want it to come alive.”

He achieves this, in part, by deftly and enthusiastically using vintage gear like the Korg ms-20 synthesizer as well as all the usual laptop plug-ins. In fact, the self-described analog fetishist, remembers Boston fondly because of an unexpected invitation he once received to visit Berklee’s collection of vintage synthesizers.

“I was in Boston and I just tweeted that I was across the street from Berklee and someone responded to me and said, ‘Hey, I’m in here right now in the synth room if you wanna come mess around.”

Of course he accepted and found himself in a dream studio full of analog modular synthesizers. “They just let me go off for a couple hours. I just recorded all these really cool sci-fi sounds. I still use a lot of the effects I recorded in there.”

Lipp is looking forward to returning to Boston tonight for his first tour stop. Having been tucked away in the studio for several months working to finish his album, he’s itching to perform live again. “I love the studio and I love making music, but at a certain point…it’s a different type of creative energy. As an artist, you need to do both.”

Music nerds, be sure to tweet at him if you have any cool toys you want him to check out and he may just oblige. Otherwise, you can see him perform tonight at the Middle East Downstairs along with The Grouch & Eligh, Pigeon John, and DJ Fresh starting at 8pm.