In memorial alumni game, Xaverian classmates remember Brendan Burke as they knew him

This is, without hesitation, the first thing every person who has ever skated with Brendan Burke has to say about him. It’s the kind of standard-issue tire pumping hockey players are known for, but that makes it no less sincere.

A better way to put it would be that Brendan was a beacon.

The game ended, but the winner was inconsequential. As we undressed and shot the shit, swigging cans of Bud Lite, news came in from Carmone that Mrs. Burke had donated the helmet to the school. There was a discussion of what should be done with it. One player suggested it be donated to the newly formed Athletics Hall of Fame.

“No,” chimed in another, silencing the room, “it should be where everyone can see it.” The rest of us agreed.

You see, Xaverian graduates don’t have championship memories to pass around after alumni games. As a team, we haven’t hung a banner in nearly 50 years. Instead, our proudest achievement is something that we neither won nor earned.

“This is a tremendous honor and wonderful tribute to recognize Brendan in this way,” Brendan’s father said in a statement about the game, “Both my sons are better people as a result of the education and values that Xaverian provided.”

It’s actually the inverse that’s true. We’re the ones honored to skate in Brendan’s name. There is still a bit of discomfort in the Xaverian community when it comes to Brendan’s legacy. Xaverian locker rooms were where Brendan reached his initial breaking point. It’s all right there in Bucci’s piece. Brendan surreptitiously quit the team his senior year after being unable to stomach the homophobic epithets used by his teammates, some of whom were there wearing his initials on Saturday.

Though Carmone never met Brendan, he saw how much his high school days affected him. “I watched him do the Xaverian Awareness Day, where he spoke in front of the whole school about what it’s like to sit in a locker room when you’re the only gay player and the difficulties of being young and in a very testosterone-driven sport. It hurt him.”

At the time of Buccigross’s article, Brian Burke was worried about his son’s role as a pioneer. “I wish this burden would fall on someone else’s shoulders, not Brendan’s,” he told ESPN. “If I could’ve picked, I would’ve picked him to go second, let someone else go first” he said soon afterwards on TSN.

Five years later, that burden is no longer Brendan’s alone. As gay athletes like Jason Collins and Michael Sam have taken up the mantle for tolerance in professional sports, Brendan’s role as a conversation starter is served. Now, he can be honored as a peer.

However insubstantial, it’s the only way we know to reclaim something that we missed the first time around. And we do so with annually renewed intentions.

A locker room is a nearly impossible environment to change. There are things that only pass in generations. Heirlooms of guilt that are repurposed as lessons and handed down by hockey dads. We will all be hockey dads, gatekeepers of a culture that has long had its tongue tied. Our first lesson will be about Brendan.

On the ice that day, his presence was unshakeable. Standing there, in the crease where Brendan once stood, playing alongside his former teammates, his mother in the stands freezing like hockey moms freeze, I was humbled to have shared this sport with him – even if hockey is the reason why I’m just now saying it.

“He’s someone who we hold in high regard,” said Burke’s former coach Dave Spinale, “He was just a real enjoyable, good-character young man. That’s what we hope his legacy will be remembered as.”

Of course, Brendan’s crusade for equality is inseparable from his legacy – a fact that the largely Catholic Xaverian community sometimes has trouble dealing with. At any rate, five years washes away a lot of politics, and many of us in the community regret the fact that Xaverian never provided the accepting, nurturing environment Brendan found as team manager for the Miami University RedHawks. Shy of penance, the Brendan Burke Alumni Game is a second chance for Brendan’s classmates to make it right.

“Brendan Burke was one of the most genuine guys I’ve ever met,” said Michael Manna, who shared the net with Burke in 2005-06, “He was the first person to celebrate others’ achievements, and he continuously brought out the best in the people around him.” Even after his death, it seems that’s still the case.

The alumni game, which was resurrected the year after a two-year hiatus, is an initiative spearheaded by Spinale and Brendan’s classmate Zach Cantin. Spinale established the game through an endowment from the Burke family, who continue to contribute to Xaverian’s alumni fund, and Cantin was spurred by Brendan’s memory to re-establish his school’s connection to their once goalkeeper.

The result has been an undeniable success, and the Brendan Burke Alumni Hockey Game stands to become an institution at Xaverian so long as interest keeps up. 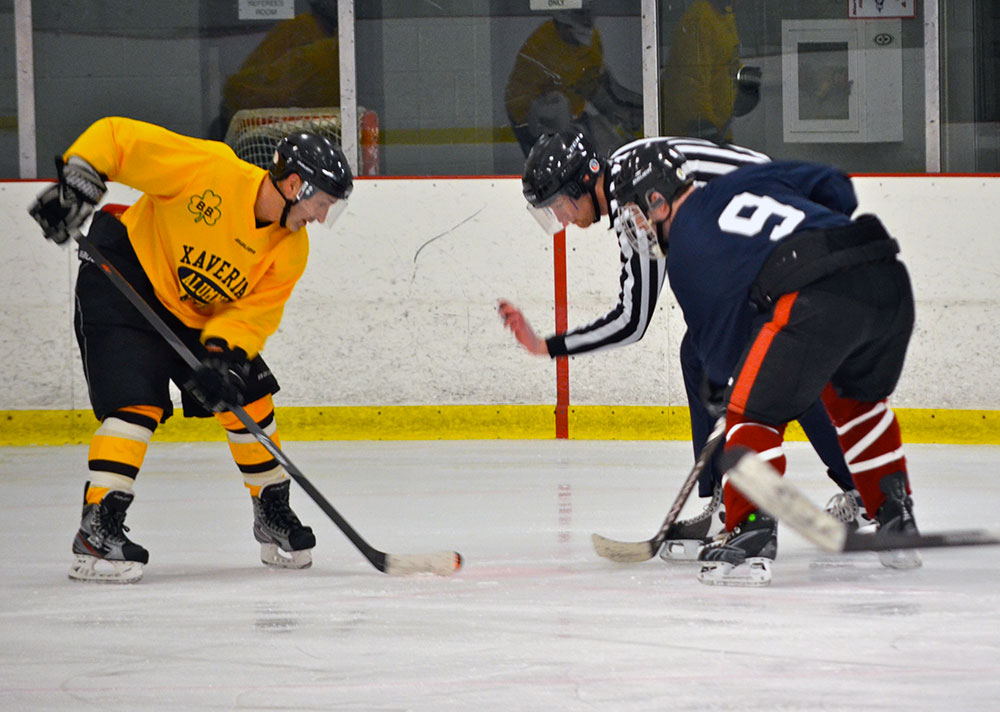 “It feels good to be coming to the rink again,” she told us, “It’s been so long. I missed the smell.”

“We’re sure you didn’t miss the smell,” interjected a stereotypical wiseass. The joke landed a round of laughs a big grin from Mrs. Burke. Classic hockey humor.

Before the opening faceoff, Mrs. Burke handed over Brendan’s goalie mask from his Xaverian days to Director of Alumni and Special Events Chuck Carmone. The mask was emblazoned with navy and gold hawks and bore his nickname, “Burkie,” on the backplate. One of the rivets on the cage had popped out from a time when he caught a ringer to the face. Chuck promised to take good care of it. There was another round of stick taps, and we took our positions for puck drop.

After that, it was all ordinary pick-up. No backcheking or shoulder pads. The flashy guys aimed high glove. Every time. The middle-aged benders just tried not to get turnstyled. There was probably a bit too much work on the hands, but the ref kept his whistle in his pocket. It was all in good fun. I let in four goals, all of which were the defense’s fault.

Everyone spent time on the bench reminiscing about their days donning the X, Brendan’s bucket perched on the dasher as a reminder of what had brought us all together. 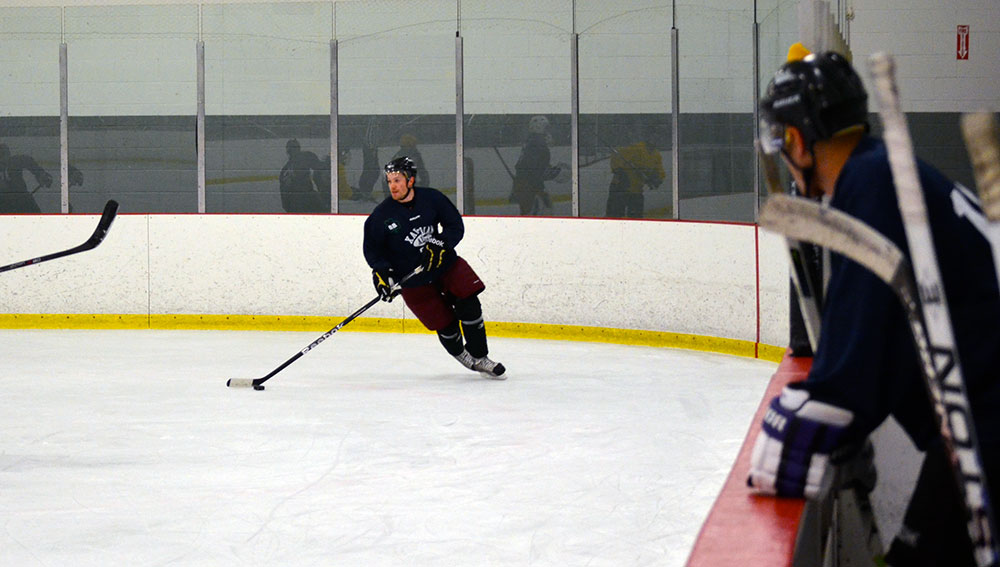 Five years ago, Brendan, the son of acting Calgary Flames GM Brian Burke, came out to his father. You may remember this eloquent, empathetic account from ESPN resident puckhead John Buccigross detailing his struggles as a gay man in the sport of hockey. You may also remember that, three months later, Brendan heartbreakingly died in a car accident, leaving a drove of people with the regret that we were never able to articulate how much his story changed us.

I first met Brendan in a locker room in 2003. Brendan was a year older than me, and he was virtually guaranteed a spot on the team because of who his dad was. We were both goalies though, and keepers share an offbeat bond that kept our competition friendly. I played freshman year before being cut, and he did two more years on JV before cracking varsity.

When his story came out in 2009 (three years after his graduation), I jumped to Facebook to deliver a fumbling congratulations that now seems so obligatory and disingenuous. I ran into him once at Pure Hockey afterwards, and I tried again to say how proud I was, but I couldn’t. All I had was boilerplate. After that, it was too late.

For me and many of his other teammates, the alumni game presented a chance to express what Brendan meant to us symbolically – unencumbered by words.

The game began with a ceremonial address from Brendan’s mother, Kerry Burke, who stood meekly in the door of the rink, smiling at the jerseyed players in front of her, all of whom wore her son’s initials on their shoulders. Her announcement was met with a ceremonial chorus of stick taps – the 21-gun salute of folks who grew up on skates and speak with their twigs.

Good-natured, magnanimous, and, as we eventually discovered, courageous, Brendan was the type of person who endeared himself to you immediately. He was a kid whose life was devoted to hockey, a sport that didn’t deserve him right away. These are things we wish we’d had the guts to tell him to his face.

As a classmate at Xaverian Brothers High School, I was fortunate enough to play hockey with Brendan several times, but I never truly knew who he was. No one in the hockey program did. We weren’t that lucky. But, on Saturday, 30 alumni strapped on skates at the Foxboro Sports Center in his honor. We remembered Brendan as we knew him.

As a buddy. As a hockey player. As a good kid. 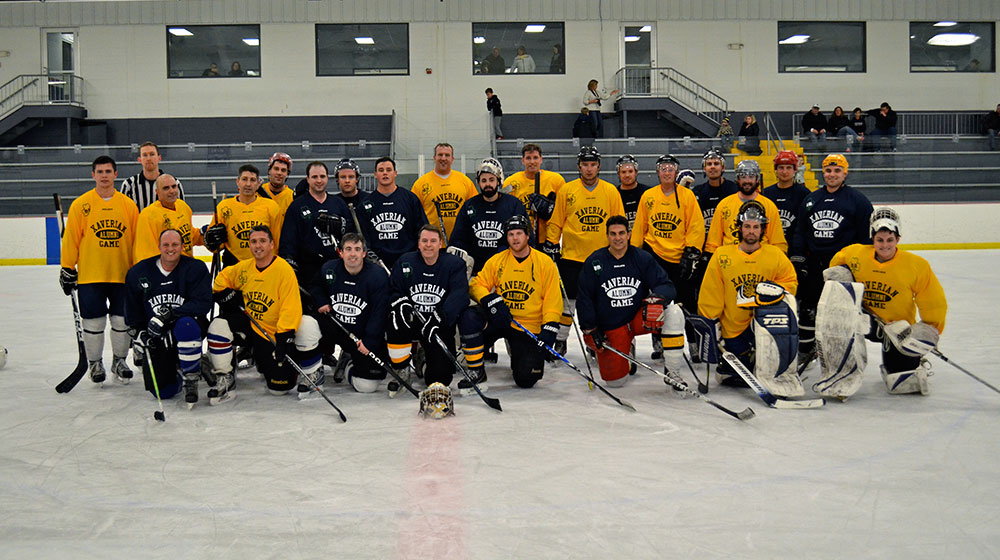