In Honor of Bob Barker’s Birthday, A Look at 5 of His Ridiculous TV Moments 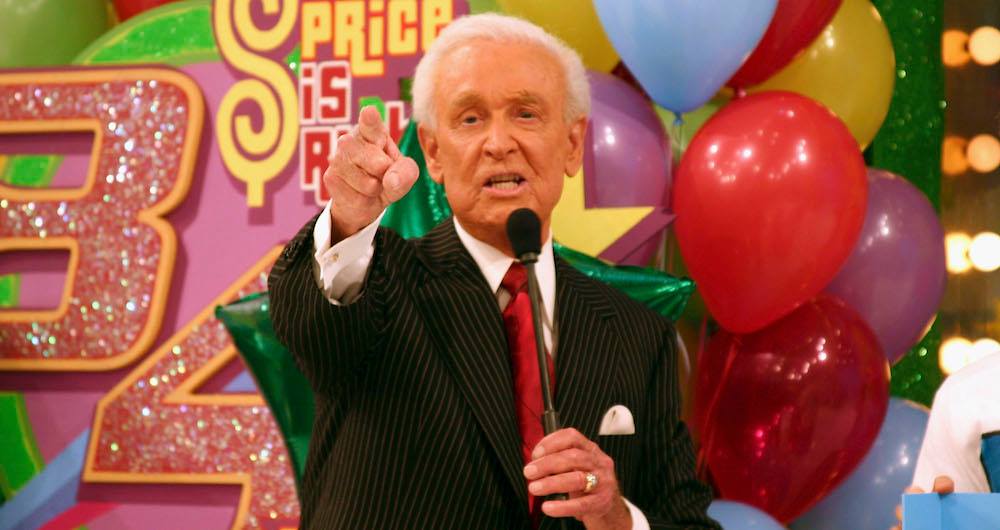 Today we honor the 91st birthday of Bob Barker: signature host of “The Price is Right.” Barker was the enthusiastic frontman of the program since it first aired in 1972, up until his retirement in 2007. Over his thirty-five year relationship with the show, Barker has helped countless contestants see their greatest game show dreams come true. Whether people walked away from the show with “a brand new car!” or merely the advice to “have your pets spayed or neutered,” Barker helped “The Price is Right” become the longest running game show in U.S. television, according to Guinness World Records.

He fostered both a passionate fanbase and a spirited live audience, who were always eager to get on stage with Bob and guess the prices of various items on stage. Barker’s career ensued with a fair amount of regularity, but there are moments that deserve some special attention. To celebrate another year of his glory, we bring you our top five television moments with Bob Barker.

When the Borderline-Illiterate Joy Somehow Won a Car
In Barker’s words, “Help her audience, she needs help.” A few minutes into the game, there appears to be a communication breakdown between Joy and her friends watching from the audience. Without their help, she begins to lose her grasp of the game’s concept. With a Ford Fusion on the line, Joy begins to have a breakdown, taking Barker with her. Joy’s job is to write down the estimated price of the vehicle using the five scrambled numbers provided, without repetition. Barker watches in horror as Joy frantically scribbles down numbers, leaving some of them out even though Barker tells her over and over again to use all five letters. Barker even threatens to take away her turn after raising his voice at her, shouting, “Now come on! Let’s go!” as she stands there confused. By the grace of whatever deity Joy prays to, she ends up winning the car in the last possible moment when she finally produces the correct five letter combination. Barker, exhausted and shocked out of his mind, takes a seat on stage mouthing the words, “I can’t believe that happened,” over and over again while Joy jumps up and down-probably still unclear about how she won. (The relevant part of this video is from 2:41 through the end)

Bob Barker vs. Flip-Flop Cheater
“The slowest moving young person Barker has ever met” shamed himself further by accidently cheating during a round “Flip-Flop.” Contestant Bretan was supposed to either flip the first set of numbers or flop the second set of numbers to create the correct price of his mystery prize. Bretan over-zealously decides to just hit the button next to the game board, revealing the answer. The crowd laughs at his mistake while Barker, dismayed at Bretan’s cheating, walks off-set, declaring that he cannot stay on stage with this “trouble maker.” Barker says that his only option is to give the young man the prize, though he only does so after gently pushing Bretan, ever so gently, off the set.

The “Most Humiliating Moment” of Bob’s Life
Barker is booed by the audience when he spins the game wheel for Tyler: a handicapped contestant who is confined to a wheelchair. Barker’s job is to land on the highest possible number, winning Tyler starting points for the game. Sadly, and humiliatingly, Barker only manages to score a five for the young man, prompting some hate from the crowd. A re-spin was definitely in order, during which Barker made amends by spinning a seventy-five in Tyler’s name. You’re still a hero, Bob.

When He Beat the Crap Out of Adam Sandler in “Happy Gilmore”
Barker played himself during a cameo appearance in the 1996 flick. He teams up with Happy Gilmore (Sandler’s character) in a Pro-AM golf tournament. Throughout most of the scene, Barker watches in shame as Gilmore refuses to tame his temper and as a result, ends up missing several shots. You know what drives Bob Barker crazy: “You not getting the ball in the hole.” When Barker blames Gilmore for their last place standing, Gilmore turns on him and punches Barker in the face. Barker bounces right back, hitting, tackling, and kicking the crap out of Gilmore after he refers to him as “Bobby.” Gilmore attempts to makes a pun during the fight by saying, “the price is wrong, bitch!” Barker defends his life’s work by ending the fight with a final blow to Gilmore’s head, leaving him unconscious. Lesson learned: never call Bob Barker “Bobby.”

When Barker Put a WWE Fighter in His Place
WWE wrestler Chavo Guerrero’s visit to the set of The Price is Right marks another epic Barker beating. This particular moment stands out, however, since it took place on the set of the show and Barker performed the ass-kicking in his showtime attire. In the skit, Guerrero interrupts Barker, who he is promoting his new book, to complain about how he failed to win a car on the show. Barker tries to quell Guerrero’s rage by telling him, “Chavo, relax!” Guerrero only gets angrier when Barker explains, “you win some, you lose some!” Rejecting this game show mentality, Guerrero declares that he is not leaving without a car. Barker puts him in his place with some killer karate moves, shutting him up with a powerful whack to the stomach and a smack to the neck. Tapping into his “game face,” Barker finishes off the clip with a calm, cool, collected smile and a kind word to his fans. Way to keep it together, dude!

Always a pleasure to have Boston.com’s Perry Eaton in studio for a chat. After we talked a bit about Pearl Jam at Fenway and Perry’s new podcast, he filled us in on Game of Thrones live and Narragansett’s new Bananagrams-themed brew. END_OF_DOCUMENT_TOKEN_TO_BE_REPLACED

No, not from afar, from the comfort of her couch. From the actual awards themselves. That’s where Meredith Goldstein was for the Oscars. She shared all the juicy, first-hand details with me. END_OF_DOCUMENT_TOKEN_TO_BE_REPLACED

It was wonderful having our good friend Meredith Goldstein back in studio this morning. She dug into the latest edition of Love Letters, which prompted us to play this song. And of course we had to discuss the Oscars. Make sure you’re following Meredith on Twitter, as she’ll be live-tweeting the awards this Sunday night. END_OF_DOCUMENT_TOKEN_TO_BE_REPLACED

Our first edition of TV Sets for 2016 might be better than every edition from 2015. END_OF_DOCUMENT_TOKEN_TO_BE_REPLACED