The Greatest Rapper of All Time Died on March 9th: Why Biggie Still Matters

“Biggie took that torch…. it was universal.”

Yesterday marked the 18th anniversary of the passing of Christopher Latore Wallace, better known to the world as Biggie Smalls or The Notorious B.I.G.

In the 21 years since his debut album, Ready to Die, Biggie has remained high on the list of greatest rappers to ever grace the genre. But his place in rap lore, though largely uncontested, is somewhat lost on younger fans.

Which is why we need to remind those younger fans just how great he was.

Rappers fight uphill battles to attain a sliver of the praise and adulation we heap on Biggie’s material. Drake’s current run as a tastemaker and top-flight rapper has lasted almost seven years. To put that in perspective, that’s longer than 50 Cent’s run from Get Rich or Die Tryin’ to Before I Self Destruct, longer than EPMD’s run from Strictly Business to Business Never Personal, longer than Ludacris’ run from Back for the First Time to Release Therapy, and longer than DMX’s run from It’s Dark and Hell is Hot, to Grand Champ. But the debate rages on as to whether or not we can place Drake amongst their ranks, let alone the rarified air occupied by artists like Rakim, Biggie, Jay Z, NaS and Kanye West.

But Biggie only released two studio albums. Sure, one was a double disk (and the only mainstream double disc rap album to live up to the rest of said artist’s discography) but even so, a surface comparison could lead some to believe rap has unfairly coddled Biggie’s legacy. So why all the fuss over a guy who, to be blunt, passed away before he had the opportunity to sell out, or catch a brick with an “experimental” album a la Common’s Electric Circus?

Well, Biggie was just that good. 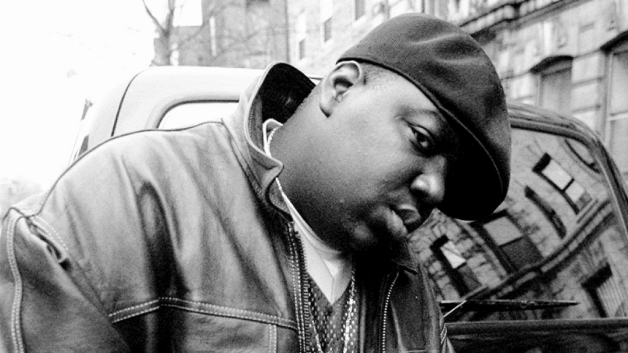 Hot 97 on-air personality and MTV host Peter Rosenberg agrees. “He could do it all. The five-tool analogy is accurate, because it’s hard to find a flaw.”

If you’ll indulge, let’s compare rap to baseball. The five basic tools for measuring player impact (and worth come contract time) are whether or not the player can hit at a high average, hit for power, run bases well, field and throw. The Baseball Hall of Fame is filled with players who possess only two or three of these tools (think Frank Thomas or Jim Rice,) but we don’t speak of them as glowingly as we do true five-toolers like Willie Mays or Ken Griffey Jr.

Why? Because the greatness of two and three tool players serves to prop up the generational talent that is a five-tool player.

The case could be made that Biggie is rap’s five-toolest five-tool rapper. 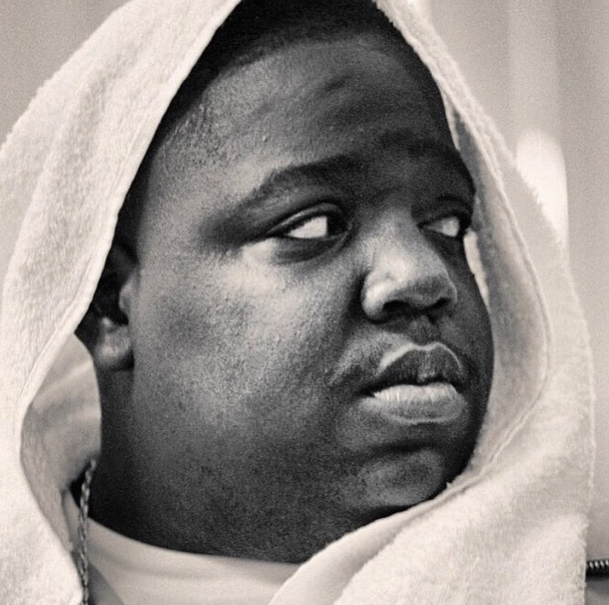 Charisma, flow, lyrical ability and content, and an ear for production are the pieces of what makes great rappers great. NaS is a lyricist much in the vein of Rakim, but he can’t pick an album’s worth of good beats to save his life. Busta Rhymes brought energy and charisma to everything he did in his heyday, but the beats often left much to be desired, and the content got tired by the end of the first (read:best) album. Tupac is the single most charismatic rapper ever, but he was repetitive, contradictory, and horribly unimaginative with his subject matter. If you like Hennessey, there’s a chance Tupac made that happen through sheer repetition. If he was still alive, he’d be a ringer for Apple press conferences.

When graded by this same rubric, Biggie has no flaw.

Some other reasons to love him, in no particular order.

*He told a story about a dalliance with a Knicks’ player’s wife so well we still ask former Knicks exactly whose wife it was.

*He cut through to the heart of the mindset that defined his output with a single line (“my mama got cancer in her breast/ don’t ask me why I’m motherfucking stressed/ things done changed.”)

*He gave us a business structure so airtight professors teach classes on it, and a prayer so widely applicable there’s no real reason we don’t all say a version of it in the morning.

*He even made Pepsi seem almost palatable in this unreleased gem.

To be clear, Biggie’s greatest greatness isn’t that he did anything unheard of. NaS told one of the best stories we’ve ever heard. Kurtis Blow got the party started. Run DMC rarely lacked for great production. Public Enemy made music for the revolution and the party thereafter. Outside of the violent paranoia that became his hallmark (a hallmark perfected by the mighty Scarface) Biggie was great because he was great at everything at once. There was nothing left to be desired.

And he did it all in three years and two albums, give or take a few singles and remixes.

And this, according to folks who witnessed his ascension, may be understating his value.

Reggie Ossé, known to some as Combat Jack, founder of the Combat Jack podcast, grants some perspective on what made Biggie larger than life.

“His sample size is small,” says Ossé. “But you have to look back at what was going on. Dr. Dre and The Chronic changed the game, it immediately rewired everything.”

And, lest Biggie’s influence be reduced to luxury raps and Versace shades, Ossé makes the case as plainly as he can: appealing and lavish as he was, Biggie was untouchable lyrically. “Nobody could fuck with him. Print that. He wrestled control back from the west coast in that day. The whole Dr. Dre, Snoop, Tupac, Death Row juggernaut. Do you know how impossible folks thought that was?”

For a single rapper to do that in such a crowded era is almost unfathomable.

Biggie snatching the spotlight from Snoop, Dre, ‘Pac, Nas, Wu Tang, OutKast, Scarface, A Tribe Called Quest, and a host of other folks who have been rather unfairly reduced to historical flotsam is like what football lore would look like if some random QB was head and shoulders better than Marino, Young and Montana in their era. Biggie lived up to the hype in a way few others ever have. Rosenberg remembers: “Biggie came up much like Nas did, in that I remember so much hype about him, and from ‘Party & Bullshit‘ to the first album, he absolutely lived up to it. It was a moment, it was a big deal.”

Ossé who was a prominent music attorney during Biggie’s halcyon days, recalls a label showcase where two young artists took the stage, one after another. “So, Arista was doing a showcase for [then Puff Daddy’s label] Bad Boy and [LA Reid and Babyface’s now defunct] LaFace, and it was Biggie and OutKast.” Outkast went first, as their single, “Southernplayalisticcadillacmuzik,” was shooting up charts.

Biggie followed up, and according to Ossé “you could see that not only was he a brilliant rapper, he had picked up some fly shit from that time running with OutKast.”

His adaptability served him well in his brief career. 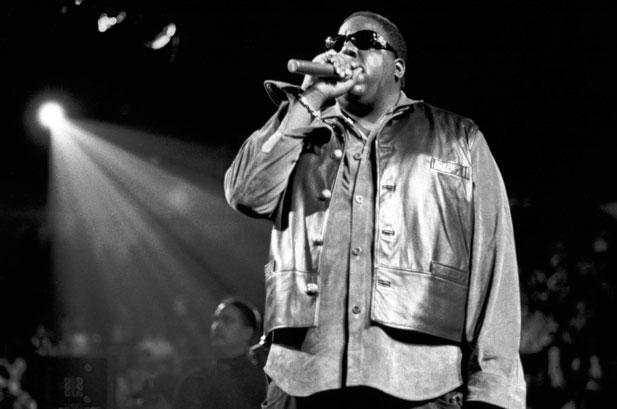 *He made Shaq listenable as an MC, and gave Jay Z a boost with features.

*He recorded with Too $hort. He out-boned Bone Thugs-N-Harmony.

*He finessed g-funk beats while sidestepping his beef with Tupac, and

*He even did a little singing here and there.

If you told rap lifers he broke a bat over his head like Bo Jackson during studio sessions, they might believe you. But, as amazing as this is in and of itself, it must be noted that he never sacrificed prowess for appeal. His output on “Notorious Thugs,” which featured Cleveland outfit Bone Thugs-N-Harmony, rivals what you’d come to expect from him in his more standard timed outings.

Maybe the baseball analogy doesn’t do him justice. Maybe he was more akin to some mythical boxer who could pack on weight, or slim down, just to punk folks in divisions he had no business in.

Whichever analogy works best, Biggie was exactly that and then some. And his outright dominance, even for such a short time, has gone unmatched in the time since. According to Rosenberg, the only mark against him is his short career. But even that adds to his mystique. “He wasn’t a studio rat like Tupac or Lil’ Wayne, so we don’t have this trove of work. He did his work and he left. Which, for it all to be that good, is incredible, really.”

All of which brings us to why fans should still care about him. 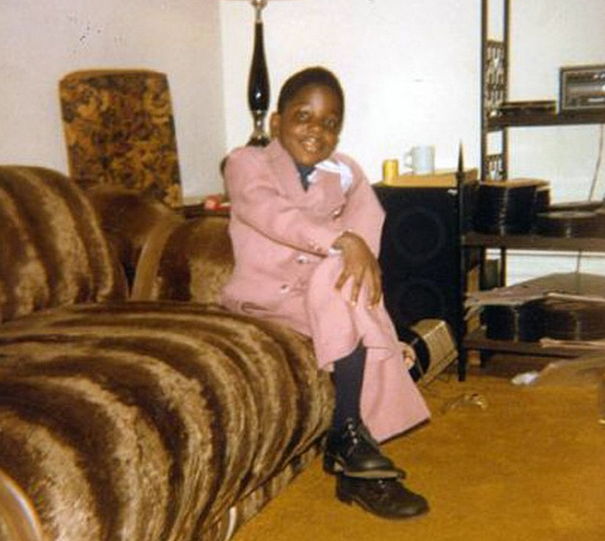 Rap is a competition.

It’s why we don’t tolerate many kids doing it. It’s why KRS-ONE threw the fat guy from PM Dawn off the stage. It’s why Raekwon and Ghost didn’t like Biggie, and part of why Big Pun didn’t like Jay Z. But, while sports rarely allows great figures from separate eras to compete against each other in their primes, music does. You can play Ready to Die, The Blueprint, and Food and Liquor one after the next. And, much in the same way the greatness of prior generations helps contextualize the feats we see on the court or field today, greatness in music is shaped, and should be judged by the music that came before it. So, while one can see the greatness of Drake unfold and grow, or Kanye’s greatness morph from album to album, it would be remiss of us as fans––and remiss of those artists at the center of the genre––to allow the legacy of such a monstrous talent to be lost on fans who were too young to appreciate it in real time.

Think of how great it would be if Drake finally released a classic rap album if Drake was your favorite rapper of all time. Now, think of how much greater that feat would seem if you had the knowledge enough to make the case that this imaginary album was comparable to Ready to Die, track for track. If Drake is as committed to forcing his way onto Mt. Rapmore as he says he is, he wants this as much as any of his fans do. Because, again, rap is one giant, rolling competition. And this reason––if we could only pick one––is the reason we should continue to keep Biggie in constant rotation.