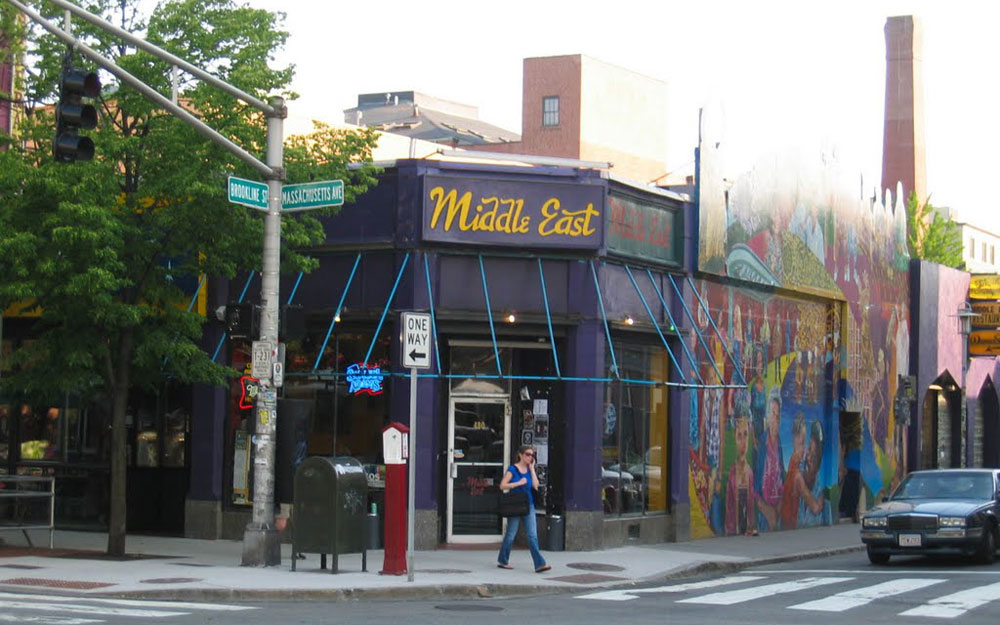 It’s awful to think, but the legendary Middle East nightclub in Central Square might not be here in a couple of years. That’s exactly what might come to pass if the venue’s owner Joseph Sater isn’t able to buy the building from its current landlords. And if that happens, would something else emerge for performance space?

According to Curbed Boston, the move will set Sater back $7 million, and to offset the cost he plans on building four or five stories of apartments on top of the space. He plans to do all this without knocking down the structure, so building the units while keeping the venue intact will require the sort of engineering wizardry that I can’t hope to ever understand.

While the idea of living on top of the Middle East is pretty cool, the story strikes me as sad for two reasons. First, the idea that the Middle East needs to be subsidized by upscale apartments or condos to stay afloat is a sorry reflection on the financial viability of arts spaces in the Boston area. Second, the fact that losing one venue will take a sizable chunk out of Boston’s local music scene shows just how limited performance space is around here.

Like anything else, a vibrant music scene needs an infrastructure to support it, and with property prices as high as they are, no developer would be willing to take a risk on a venue designed for groups with a smaller following. Local rockers have typically gotten around this by playing in basements — which tends to piss off everyone over the age of 27 and has on more than one occasion led to run-ins with the police. So you get this vicious cycle: There aren’t enough venues so you play in a basement, and because you play in a basement, the city thinks you’re a walking noise violation, and because you’re a walking noise violation, the city doesn’t want to put your interests over those of voting residents, so there is very little incentive for anyone to build more venues.

The good news is that some of the local powers that be have started to realize that this is a bad situation for Boston. All the way back in September, some of Boston’s mayoral candidates like John Connolly and Mike Ross were hinting at the need to open up new spaces, if only to get those damn kids out of basements. New mayor Marty Walsh never made much of an issue out of this, but he has shown an interest in improving the artistic standing of the city. What he should realize is that investing in grassroots artistic growth — and I’m not just talking about venues for punk shows, but also places for pop-up theater and art galleries — would be a very cost effective use of tight city funds.

City Hall doesn’t need to build a new Symphony Hall to host Boston’s newest alt-country horror-core outfit. All it needs to do is renovate sections of some preexisting city-owned spaces, even if they’re located far away from the epicenter of the current music scene. A couple of places spring to mind. The Strand Theatre in Dorchester is already owned by the city and can be easily adapted to host rock shows. Similarly, a deal could be worked out with Riverside Theatre Works in Hyde Park to host concerts, as well as some more experimental theater and art shows. Bartlett Yard in Roxbury — once an abandoned bus yard — showed that some truly incredible art can take place in underused spaces, if only the city would allow it.

Hopefully, the Middle East will continue to stay open — and if that means that they need to build some luxury condos to make ends meet, then so be it. But the threat of the venue closing should be a wake-up call, not only to fans and musicians, but to lawmakers on boths sides of the Charles. Recently, there has been a lot of lip service paid to the transformative power of the arts, but if local pols actually want to foster an arts scene in Boston, they should invest in venues.

Enter to win tickets to see Trio Da Kali at The Villa Victoria Center of the Arts (Newton, MA) on April 10th. END_OF_DOCUMENT_TOKEN_TO_BE_REPLACED

END_OF_DOCUMENT_TOKEN_TO_BE_REPLACED

Enter to win tickets to Rhye at The Paradise on February 28th. END_OF_DOCUMENT_TOKEN_TO_BE_REPLACED

Enter to win a pair of tickets to attend The Hess Collection Seminar and Dinner as part of Boston Wine Festival 2018 at the Boston Harbor Hotel on Wednesday, March 14th. END_OF_DOCUMENT_TOKEN_TO_BE_REPLACED

Her new album has been pushed back, but we have Kimbra’s new single for you. END_OF_DOCUMENT_TOKEN_TO_BE_REPLACED

The folk duo returns with a new record this week. END_OF_DOCUMENT_TOKEN_TO_BE_REPLACED

Now that we’re done looking back at 2017, let’s look ahead at 2018. END_OF_DOCUMENT_TOKEN_TO_BE_REPLACED

Our first Song of the Week for 2018. END_OF_DOCUMENT_TOKEN_TO_BE_REPLACED