Hundreds of shoplifters are using Tumblr to swap secrets. And they’re getting away with it. 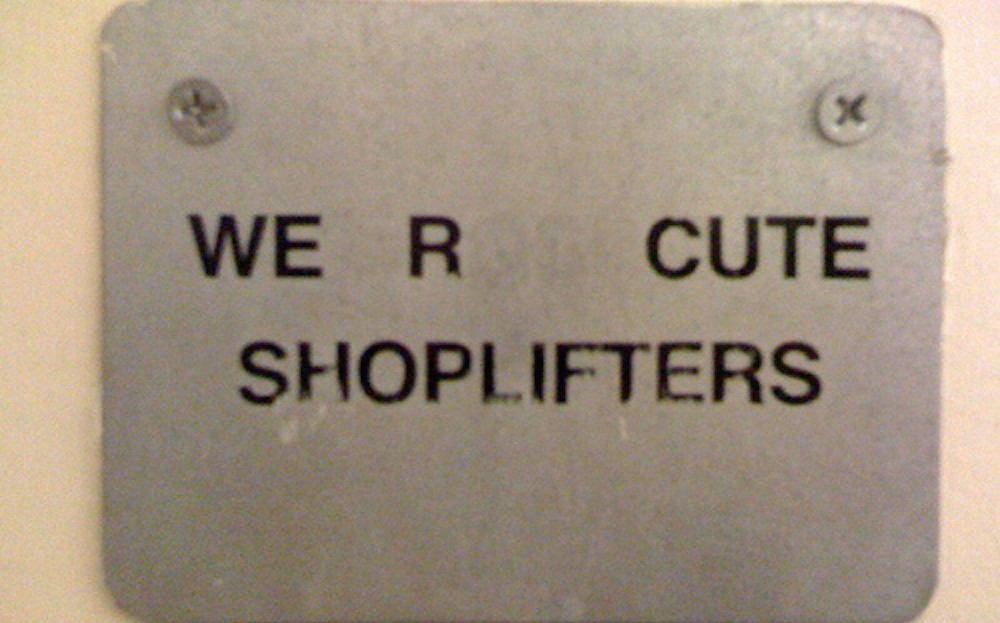 Imagine a place where you brag about being a shoplifter publicly, where you can post tips, tricks, and stories of theft to be easily viewed and shared by hundreds of other like-minded thieves.

A community of skilled purported shoplifters has quietly banded together on Tumblr, using the blogging platform to communicate using the hashtag #liftplay.

They’re a gang–a group of covert, organized, self-proclaimed criminals who work together to steal and extort things for personal gain. They’re an intricate and interconnected group of people who are using the blogging platform, whose content restriction is notoriously loose, to prop up their community.

Spend enough time in the #liftplay tag on the blogging platform and you’ll see that this massive group of alleged thieves have streamlined the process of making a fully-functioning shoplifting blog.

Here’s how it’s done, in a nutshell:

Step 1: They find other users in the #liftplaying community and follow as many as possible.

The community has cycled through several names. Before “liftplaying” it was “liftshopping,” “five finger discount,” “liftblr” (not to be confused with the fitness community of the same name), and originally just straight-up “shoplifting.” They diligently protect their identities by rebranding themselves, changing the name of their community, and switching up the hashtags they use to archive their posts in order to fly under the radar of those not in the community.

They reblog posts like these to track down users who are still active in the community, since using the hashtag isn’t the most efficient way to find them–many users think using tags to archive posts makes them too vulnerable, too easy to find.

Once they’ve followed other liftplayers, they post their first haul. That’s step 2.

That’s the main focus of these blogs, after all. Hauls are posts detailing their latest shoplifting spree(s). They build status, give web presence, and offer bragging rights.

It’s simple: People neatly arrange and then photograph each item they stole and add a caption detailing the brand, price, and description of each item. 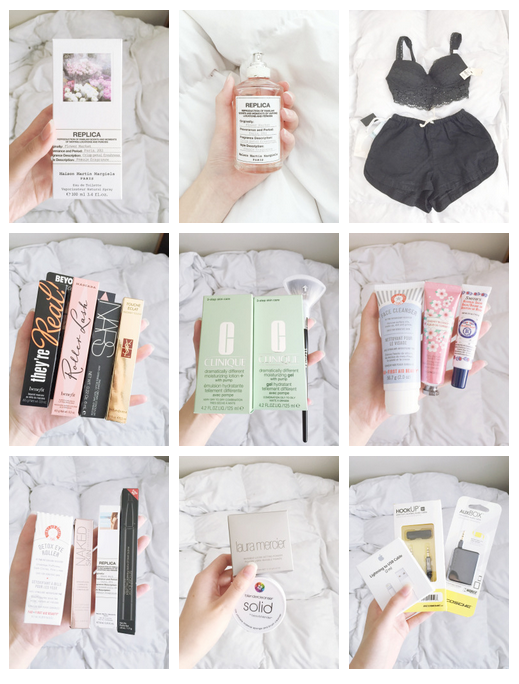 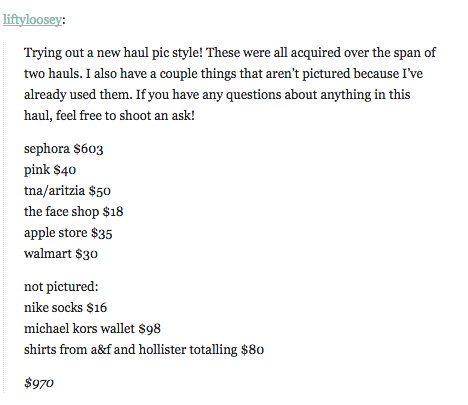 There’s a grand total dollar value of everything they stole at the end of the post. Some coyly refer to this as the amount “saved” rather than the amount taken, insinuating that theft is the new way to pinch pennies. Typical totals go from the 100-dollar range to upward of $1,000. The biggest single haul we came across in the #liftplay tag totaled around $8,000.

Blog owners will often keep a running tally of how much they have “saved” to date. Some of these totals surpass $10,000.

In Massachusetts, any theft with a commercial value of over $250 is a felony. This would make nearly all these purported shoplifters subject to felony charges in Massachusetts, were they apprehended in the state. Detective Steven Blair of the Boston Police Department says shoplifters can now be held accountable for all crimes committed statewide–a change made in the past year, deviating from older laws that only allowed charges for crimes committed locally. This new setup makes it easier to catch people like liftplayers who go to different areas, outlets, and malls to avoid suspicion and prosecution.

But, unsurprisingly, none of these bloggers publicly post their whereabouts, and these kinds of laws vary from state to state.

So, moral of the story: They never say their name, where they’re from, or any other pertinent personal information. This is what could get them nailed.

They do, however, feel enough of a sense of security to tell each other just what they did to avoid being caught. Which brings us to the next phase in establishing yourself as a liftplayer:

Step 3: They tell everyone how they got away with it. 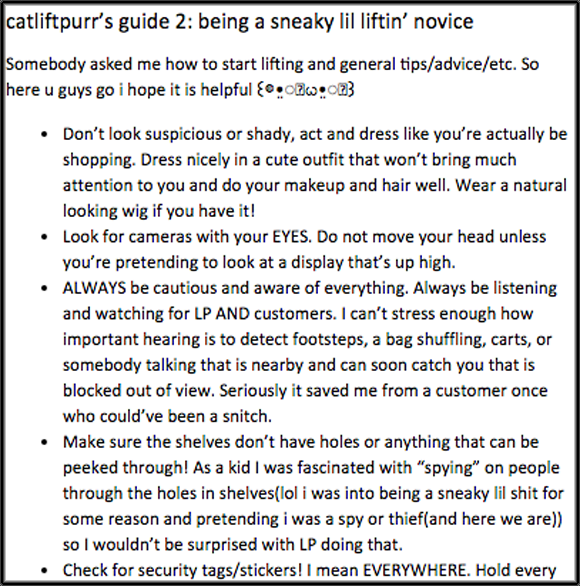 Comprehensive lists of “tips” on how to successfully shoplift are incredibly common in the community.

These lists are second only to hauls in terms of how frequently they show up on liftplay blogs. They’re reblogged thousands of times, spreading the information from user to user, giving liftplayers an inventory of the tools they need to get away with theft.

The techniques vary in difficulty, some of them being simple enough for anyone to try (slipping nail polish into your tall boots as you crouch down to “look at colors”) to incredibly risky, like this one explaining how to steal a MacBook:

While most of the “tips” are meant to be applicable in all stores, a number of these technique posts are written with specific places in mind.

Liftplayers go into certain retailers over and over to scope out the LP (loss prevention) policies and memorize store layouts. They hit these places repeatedly until they’ve figured out how to effectively maneuver around security.

They then divulge tried-and-true camera blindspots, the stores’ tagging methods, the attentiveness of sales associates, security in the dressing rooms, and more. They even go into detail about tags and pins, listing different kinds of security tags that are used in major retailers, how to identify them, and how to remove them.

They make it easier for anyone, veteran shoplifter or otherwise, to easily steal from popular retailers. They make it easy for rookies, people still in step 3, to get good at stealing.

Step 4: They steal things only out of desire, never out of need.

These alleged thieves’ motives are made obvious by the items they go after: Everything they take is a luxury. They steal because they don’t have enough money. Many of them openly say this, especially when they’re directly asked about their motives.

It’s never necessities they’re after. It’s not food, or six-packs of Hanes and toothpaste. It’s lavish: $30 pairs of underwear and $45 tubs of lotion and $125 wallets. They’re taking what their parents won’t give them or their jobs can’t afford them.

There are posts detailing how to shoplift at grocery stores, but they’re few and far between and have little notes. A small number of liftplayers talk about selling their stolen goods at a reduced price for profit (it’s called boosting and it’s not very common). Some claim they hate capitalism, hate consumerism, resent the amount of money that they have to pay for goods that are mostly inexpensive to make. There are a handful of explanations like these for why some people shoplift, but they’re unusual.

Overall, liftplayers take extravagant material goods to keep for themselves. 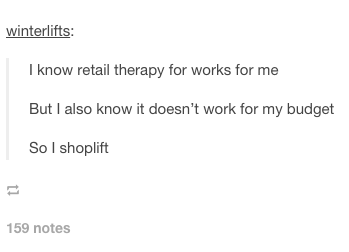 Many of the things they say in their posts indicate that they lack empathy, remorse, or guilt. 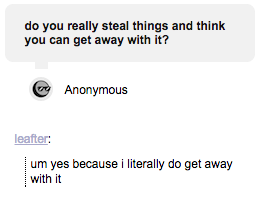 Moreover, many of the tips these users recommend are incredibly manipulative and would put themselves and their loved ones in personal and legal jeopardy.

Terrence Schulman of The Schulman Center for Compulsive Theft, Spending, and Hoarding notes that underlying issues are likely at play in most cases of shoplifting.

“I’d say that almost all people who steal have some unresolved psychological and emotional issues,” Schulman tells BDCwire. 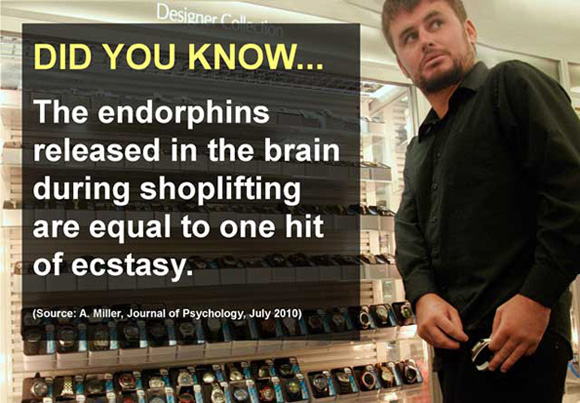 He says that the unabashed gloating seen in the liftplaying community is likely due to liftplayers having learned poor behavior over time.

“I suspect most of the people bragging online have issues, too, but either have been hurt more and have a totally numbed sense of right or wrong because they’ve been wronged so often or so badly,” Schulman says. “They’ve had dishonest behavior modeled for them.”

He also notes the possibility of liftplayers’ desire to belong to a community, a need to feel comfortable with others.

Schulman says that some users “may stumble upon these boasting sites and be prompted to steal, or escalate their stealing, to share [experiences] with others and feel a common bond. … It may even be that some are not actually stealing as much as they say.”

He continues: “I think some of these people have low self-esteem and, unfortunately, they are deriving a warped sense of skill, accomplishment, acceptance, and admiration, from their stealing. As with gangs, people crave belonging and often find groups that are easier to fit in with.”

This brings us, finally, to step 5: They cover their tracks. At all costs.

Most liftplayers think that their online anonymity guards them from being tracked and persecuted. But some users feel they can’t be too careful and go to more elaborate measures to protect themselves.

Many within the community claim that what they do is all “roleplay,” that none of it is real, and that they’re simply lying about shoplifting hundreds or thousands of dollars’ worth of merchandise (presumably where the “play” comes from in “liftplay”).

While some bloggers clearly state that they are truly stealing, certain blogs insist that everything they post is totally make-believe and that none of the stories they tell are true. And there’s a middle ground where users say that they are roleplaying in a tongue-in-cheek manner that makes you question whether or not they’re telling the truth.

It’s impossible to tell which of them are lying. It’s entirely feasible that some liftplayers are taking pictures of their own legally purchased goods and pretending they’ve shoplifted in order to belong to the community without breaking any laws. Many of them might be saying they’re roleplayers as a means of protecting themselves. 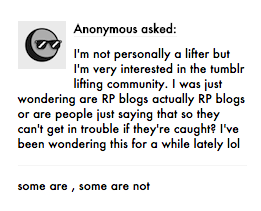 It’s all incredibly elaborate. Anything so diligently thought out must come from the mind of someone brilliant. Or, at the very least, keenly focused.

But, focused on what? Which brings us back to the “why” of the matter.

Combing through the endless, scrambled din of posts from the liftplay community, most of which are not tagged, you can find a common mentality shared by most of the bloggers: Greed. Desire. Materialism. 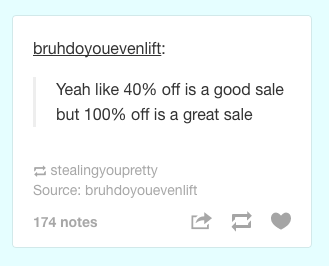 Schulman also mentions culturally-perpetuated materialism as a possible explanation for why these purported shoplifters are so interested in stealing these high-priced goods, that the ubiquitous nature of advertising is leading people to want things more and more. And shoplifters’ solution is to just take it.

So they do. And, seemingly, they’ve found a way to almost always get away with it.

They’re one step ahead. They meticulously cover their tracks. Almost to the point of paranoia, these users are aware of the threat of discovery both online and in person.

In the same way that they’re constantly vigilant about the possibility of being caught in the act of stealing, they have their eyes peeled for people online who are interested in exposing them. They’re forever ready to drop the goods and scamper out of the store. And they’re always ready to disappear from Tumblr, scrub their blog of all posts or identifying factors, like this one pictured below: 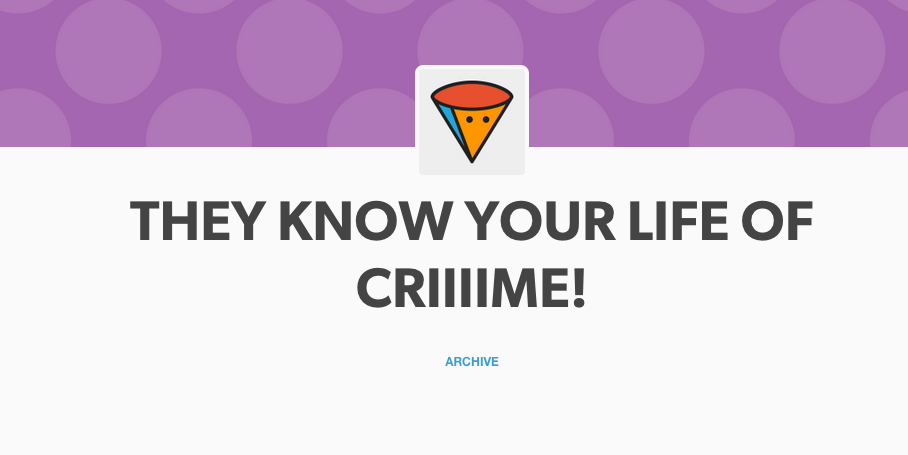 Like any gang, many members of the liftplay community are highly self-aware.

Inevitably, however, some of them are caught. A small handful of bloggers tell stories of how they were apprehended, sloppily and clumsily making rookie mistakes and getting detained. These people become cautionary tales, add to a lexicon of do’s and don’ts and pointers and how-to’s to fly way, way under the radar, both online and in-store. 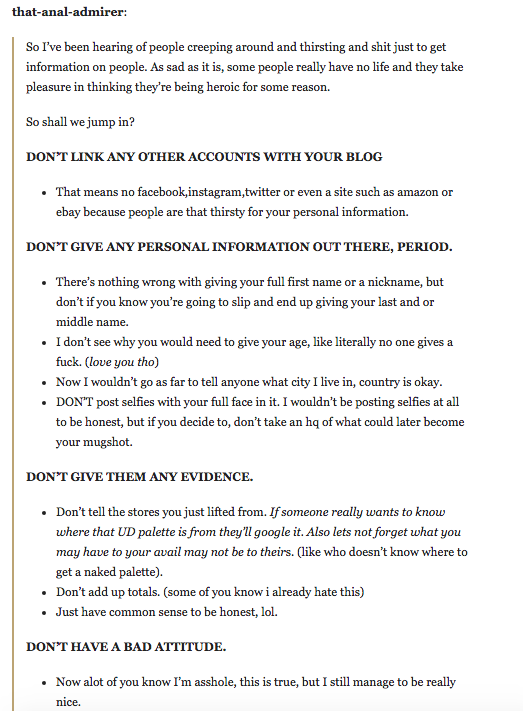 Their efforts to protect their identities echo the techniques of real-life grand-theft artists. 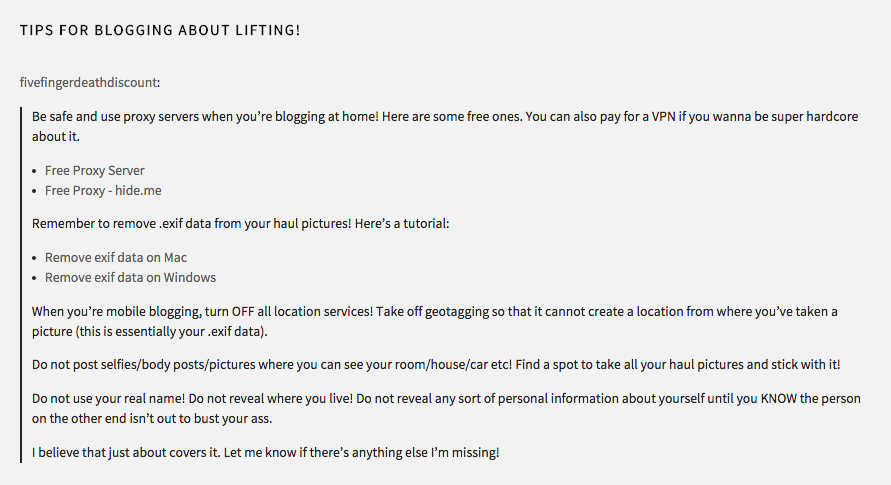 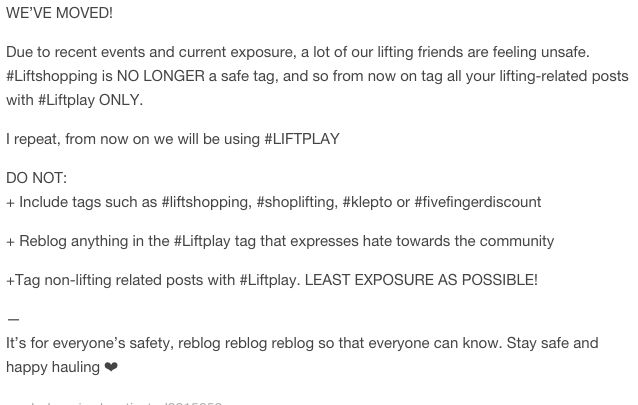 There’s secrecy to it. It’s a planned operation that keeps those involved close and those on the outside in the dark.

That’s the sixth and final step here: They keep quiet and don’t get caught.

And when they do get tracked down and disappear, they’re never really gone. Targeted liftplay bloggers simply vanish and crop up elsewhere with a different name. It’s a virtual game of whack-a-mole: One blog is put on blast for stealing, and when the inevitable onslaught of criticism and targeting ensues, the blog disappears. Immediately, a new one pops up on the other side of the blogosphere. It’s an endless cycle of content posting, exposition, and track-burying.