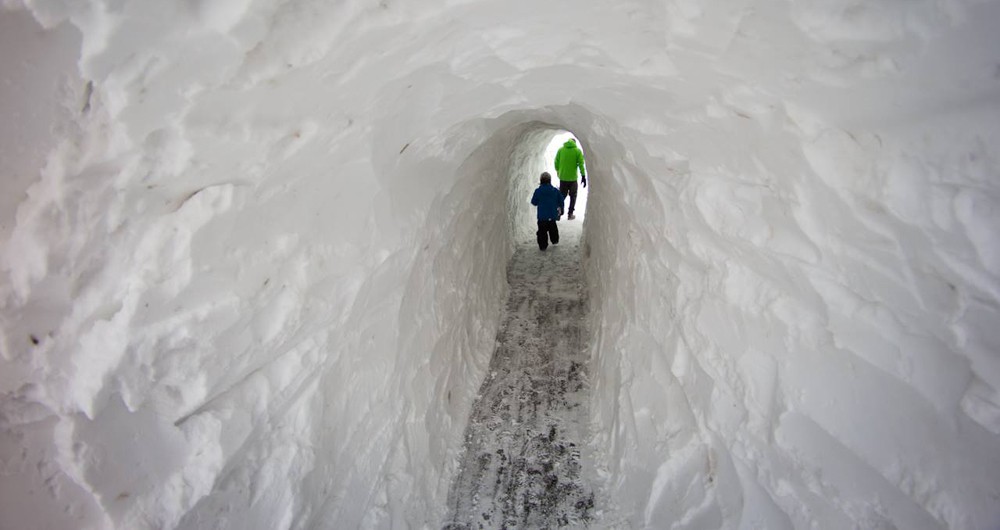 Along the Malden and Mystic Rivers sits the Wellington Greenway, a hiking and biking path that leads users from Boston’s inner harbor into Medford. It’s quite popular with commuters at the Wellington Station T stop on the Orange line. However, snow removal efforts by the MBTA blocked the path with a gigantic mountain of snow, rendering it all but accessible. That is, until a few local cyclists took matters into their own hands.

“One night I’m coming home and suddenly there’s this huge mountain of snow in the way,” Goldberger told BDCwire. “So I carried my bike over it and took a picture with the bike in front for comparison.” 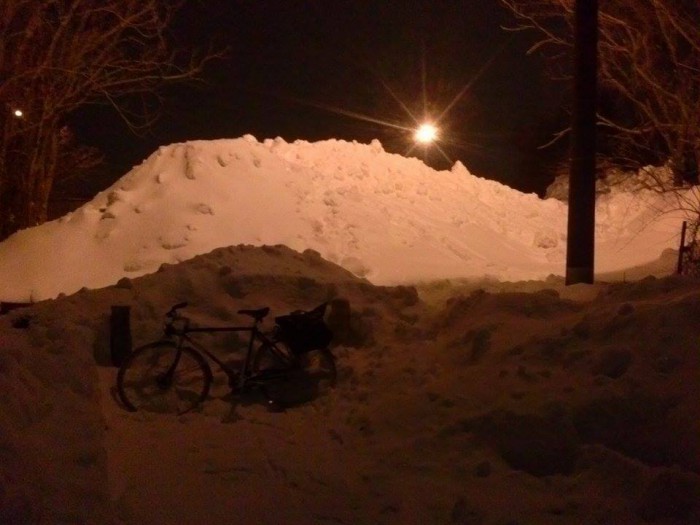 Armed with the photo, Goldberger went into Wellington Station to file a complaint. An MBTA official told him that the snow hazard was likely the responsibility of whoever was in charge of maintaining the parking lot. When Goldberger contacted the parking lot attendants, they suggested the MBTA was responsible for removing the pile.

“Rather than waiting on hold for a million years calling the MBTA, I posted the picture online and said, ‘If nothing is done about this, it’s going to take months to melt.’”

That’s when Goldberger’s friend Shadron Davis responded with a “weapons-grade-crazy” idea: “Get some friends together and tunnel through it.” The response was originally a “facetious” one, Davis admits, but the more she thought about it the more she liked it.

“I messaged him again to say, ‘You know what? We should go for this.’ So we started mobilizing.”

The two conspired with a few friends and the members of the Boston Bike Party to start digging. What resulted was 8-10 hours of digging split into individual and group shifts. Ari’s friend Matt Carphree put in the first shift – a mind-boggling hour and a half’s worth of digging on Monday afternoon. Later that night, Ari, Shadron, Dan Carew, and Anna Tsykalova continued Carphree’s work for another three to four hours of digging. 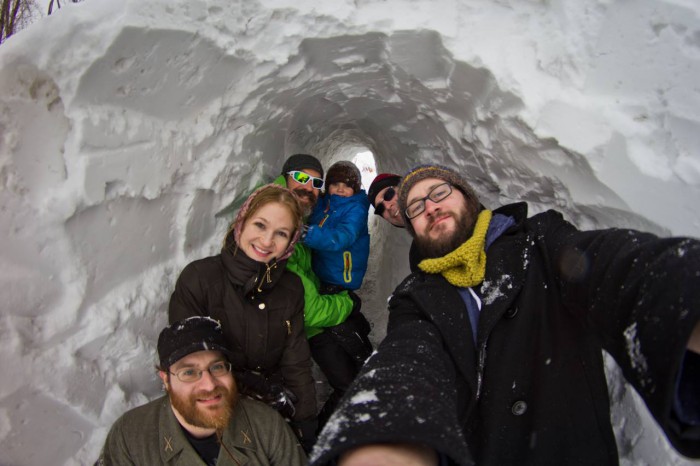 Subsequent bouts of shoveling on Tuesday and Thursday finished the deed, which resulted in an astounding 40 feet of tunneling from one end to the other. The group present for Thursday’s breakthrough celebrated with photos, a YouTube video, and a few rounds of Sam Adams.

“I’m somewhat in disbelief that we completed it,” Davis told BDCwire. “We didn’t run into any impenetrable ice, have a cave-in, or give up. That’s the crazy part!”

So far, the tunnel has provided everyone with access to the Wellington Greenway. But winter isn’t over, which leaves some doubt as to whether or not the 40-foot impromptu “Big Dig II” will survive any further snowy or ice onslaughts. Goldberger maintains a practical mindset despite the weather. 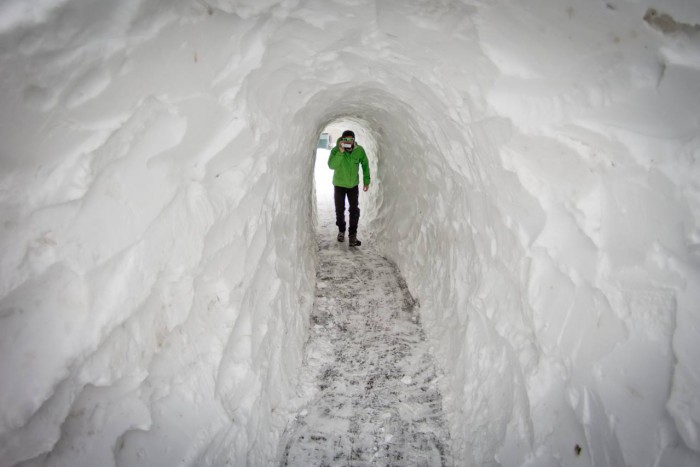 “Whoever has been maintaining the Wellington Greenway, they’ve been doing a decent job so far,” he says. “So as long as they keep it up, and as long as the MBTA doesn’t box in the path again, I don’t really have any issues with whatever happens.”

Of course, a tunnel that long encased in snow and ice isn’t necessarily the safest thing out there. Sure it makes for awesome photos and viral videos this time of year, but what if a potential “cave-in” happens to an unknowing commuter or passerby?

Goldberger agrees the MBTA, the Malden Department of Public Works, the parking lot overseers, or whoever actually is in charge of maintaining the Wellington Greenway could deem the tunnel unsafe. If they do, however, he and his fellow cyclists hope that whoever has been doing an otherwise stellar job maintaining the path would provide an alternative solution.

UPDATE: The snow tunnel was knocked down at some point on Saturday and blocked with a sizable boulder of snow. 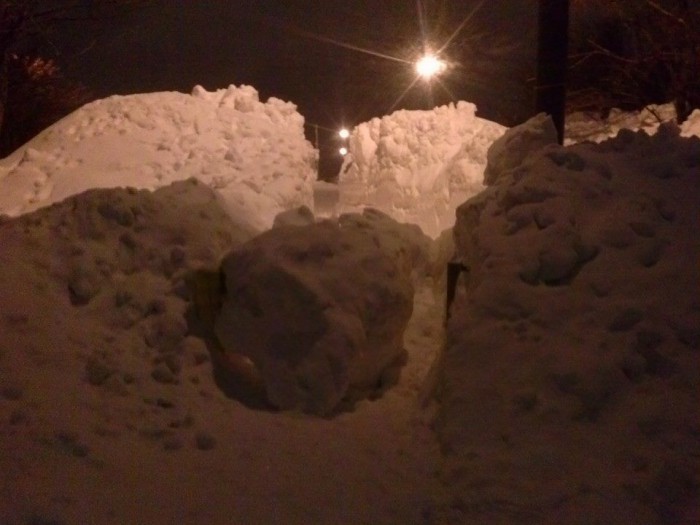 Shovelers continued in their mission, however, and cleared the path once again. 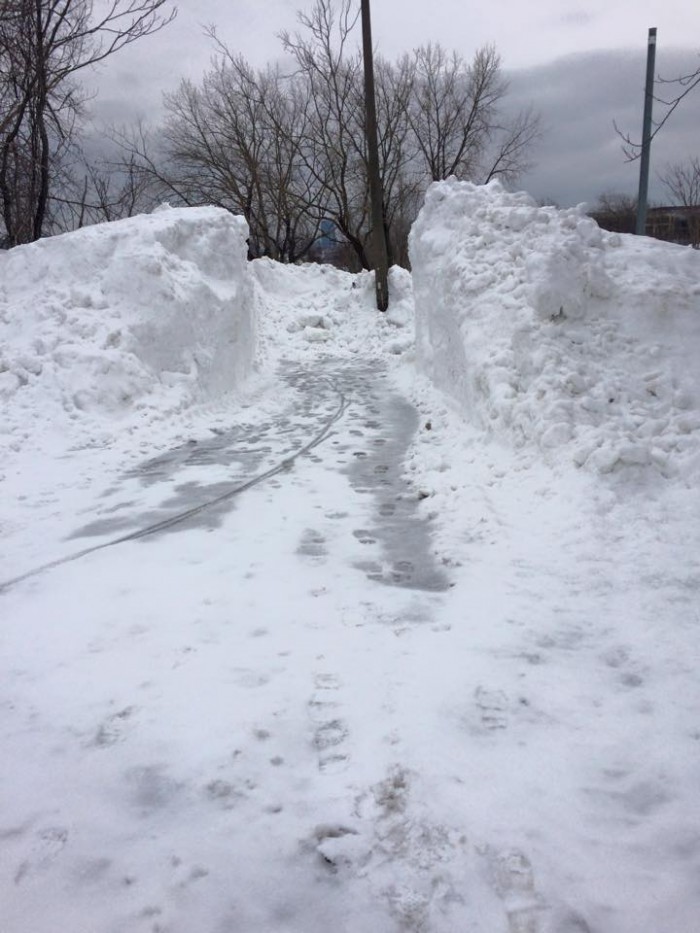 Enter to win a pair of tickets to attend The Hess Collection Seminar and Dinner as part of Boston Wine Festival 2018 at the Boston Harbor Hotel on Wednesday, March 14th. END_OF_DOCUMENT_TOKEN_TO_BE_REPLACED

We ate vegan blueberry cake and it was amazing. END_OF_DOCUMENT_TOKEN_TO_BE_REPLACED

Dan Croll is a great musician and an even better person. END_OF_DOCUMENT_TOKEN_TO_BE_REPLACED

We kicked off the weekend with a visit from Sasha Purpura, Executive Director of Food For Free. Sasha was back to promote next month’s Craft for a Cause event, a craft beer festival celebrating the Central Square Cultural District. END_OF_DOCUMENT_TOKEN_TO_BE_REPLACED

Summer is the hungriest time of the year. Millions of kids rely on school meals, but in summer, the meals disappear. HGTV’s Taniya Nayak was in studio this morning to talk about Taste of the Nation this coming Tuesday, June 6, which benefits Share Our Strength’s #NoKidHungry initiative. Click here to get your tickets. END_OF_DOCUMENT_TOKEN_TO_BE_REPLACED

Community Servings provides nutritious meals to individuals and families living with a variety of illnesses. Stephanie Carrigg was in studio this morning to talk about this year’s Meals4Moms program, where your contribution not only helps feed moms in need, but nets you some great goodies for a mom in your life. END_OF_DOCUMENT_TOKEN_TO_BE_REPLACED

Continuing our month-long series spotlighting videos we hope will inspire you think. END_OF_DOCUMENT_TOKEN_TO_BE_REPLACED

The first in a month-long series focusing on new songs that go a little deeper. END_OF_DOCUMENT_TOKEN_TO_BE_REPLACED