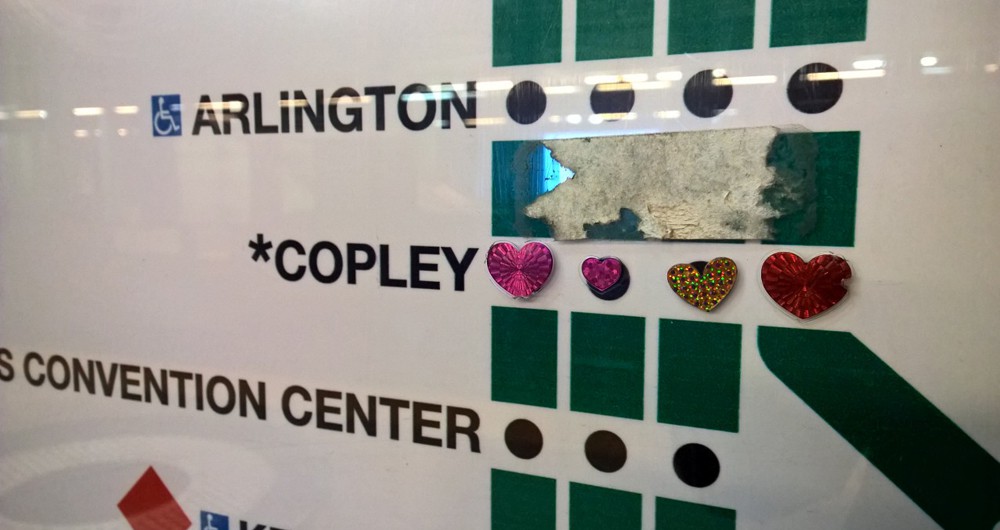 You’ve probably seen them before, but you may not remember them. They popped up all over the MBTA after the Boston Marathon bombings two years ago. In stations, on trains, and all over the news feeds across the city. Yet the highest concentrations existed in Copley Station and on the Green Line trains that pass through it.

Two years ago, someone covered the Copley dot on just about every MBTA map with a small, multicolored heart sticker. A few of these were accompanied by additional stickers with handwritten hashtags (#HeartsOverCopley) and links (Facebook.com/HeartsOverCopley). A Twitter account even popped up. The reason? To encourage commuters to share their thoughts, feelings, and photos on social media. 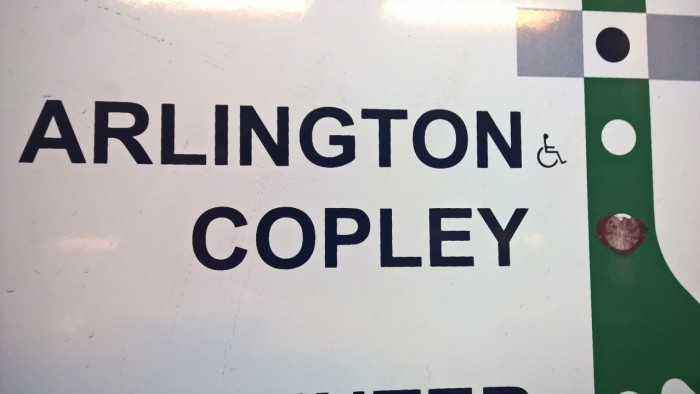 Nichole Clarke of Brookline usually takes the C train into the city for school and work, especially on the spring’s rainier days. That’s when she first noticed the heart stickers. It was just a few days after the bombings, and despite the generally downtrodden character of Boston’s inner city, many tried to carry on with business as usual.

“I was happy to see the sticker because I was not happy about taking the T that day,” she says.

She appreciated the gesture, especially since it helped her get through the rest of her work day. Others, like Lasell College graduate Chelsea Zeig, took the hashtag’s advice and shared the stickers with the world wide web.

“When I saw the hearts, I felt this feeling of safety and togetherness,” says Zeig, who was a college junior at the time. “I could tell that somewhere near me was someone with a helping hand.”

That helping hand proved very reassuring for Zeig, who worked as a resident assistant at the college in Newton. In addition to her own worries, she was responsible for the well-being of dozens of freshmen students in the dorms. The bombings, the lock down, and the manhunt that ended in nearby Watertown proved difficult for her and her campus, yet seeing the stickers reminded Zeig that all was not lost.

Ryan Delgado felt the same way when he first noticed the hearts that summer. At the time, the Wentworth Institute of Technology senior was set to graduate and move to Atlanta for an internship. He often took the Green and Orange lines between his home in Mission Hill and school, and although the stickers turned up soon after the marathon, Delgado didn’t really notice them until July.

Nice sight to see on the T #heartsovercopley #bostonstrong pic.twitter.com/VpfZnv2nF9

“I felt proud to be a Boston resident,” says Delgado. “It’s a perfect example of what Boston is…. [We] feel the need to protect it, show pride in it and even though we are hard-nosed people, we have a level of compassion.”

Two years later the hashtag is hardly used, the Facebook page is inactive, and the Twitter account has zero tweets (and almost as few followers). The responsible party (or parties) never came forward, and most of the stickers have been removed. However, a few remnants hang on. Every once in awhile, they’ll pop out at you when you board a Green Line train. And if you look hard enough, you might even find them in and around Copley Station itself.

They’re in good company. Many of the official “Boston Strong” stickers the MBTA pasted all over its buses and trains are still up, too. 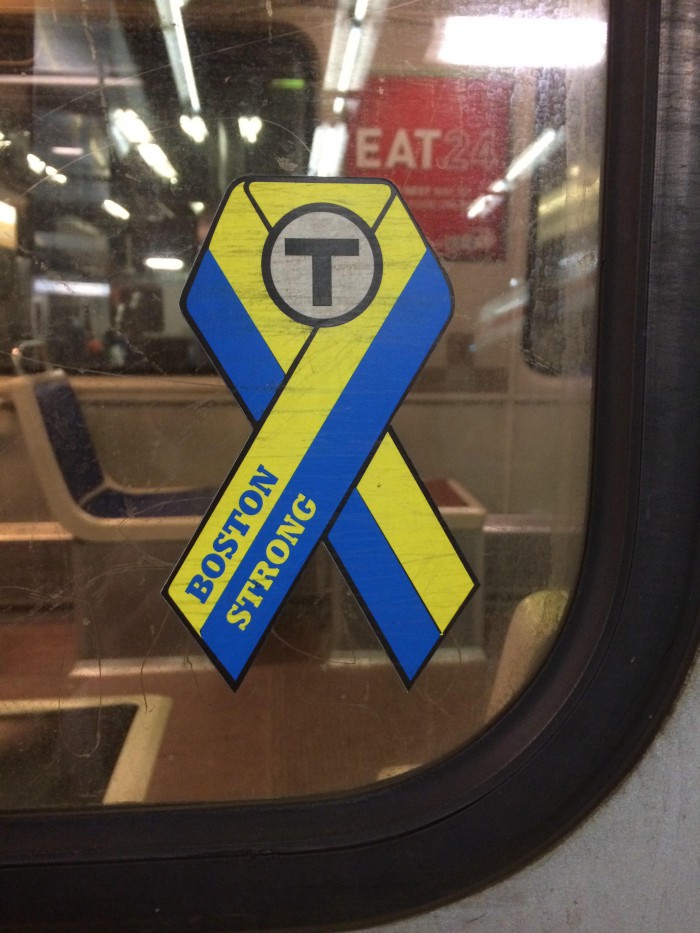 “Two years later, as people are boarding T buses and trains, they are reminded of the spirit and resilience exhibited by the residents of this great community,” says MBTA spokesperson Joe Pesaturo.

Both are reminders not so much of the horrors created by that day and the week that followed, but of how the city responded. Of the good things that people did during that April week. So even if the online components meant to accompany the #HeartsOverCopley stickers are long gone, many of their real-world manifestations are still strewn throughout the MBTA system. Trying to find them takes time, but they’ll always surprise you during the daily commute or on a ride into the city for a night out.

“I wouldn’t be surprised if those have been left there intentionally,” says Delgado. “Anyone who has taken one down or thought about it, probably felt a sense of they were doing something wrong to the city and its people. I hope they stay up forever.”

Enter to win a pair of tickets to attend The Hess Collection Seminar and Dinner as part of Boston Wine Festival 2018 at the Boston Harbor Hotel on Wednesday, March 14th. END_OF_DOCUMENT_TOKEN_TO_BE_REPLACED

Boston band Funeral Advantage is Tyler Kershaw. And Tyler Kershaw had a fun childhood, so it seems. END_OF_DOCUMENT_TOKEN_TO_BE_REPLACED

Perry put me on to daephne and the album blew my mind. END_OF_DOCUMENT_TOKEN_TO_BE_REPLACED

END_OF_DOCUMENT_TOKEN_TO_BE_REPLACED

Ted Regan of the family-owned and operated Mass Bay Lines joined me in studio this morning. This summer, Mass By Lines is celebrating their 50th anniversary by adding a variety of specialty cruises to their well-known Harbor Tours, Sunset Cruises, and Starlight Cruises. Click here to enter to win VIP passes that will get you on to any cruise for free for the entire summer! Click through to listen to my chat with Ted. END_OF_DOCUMENT_TOKEN_TO_BE_REPLACED