A couple days ago, Piotr Naskrecki, an entomologist based at the Museum of Comparative Zoology at Harvard University, saw photos he had taken of a Goliath birdeater, the largest spider in the world (about the size of a puppy), go viral. But when readers learned he had euthanized and collected the spider to be studied and showcased at the Smithsonian Museum, the hatred came pouring in. 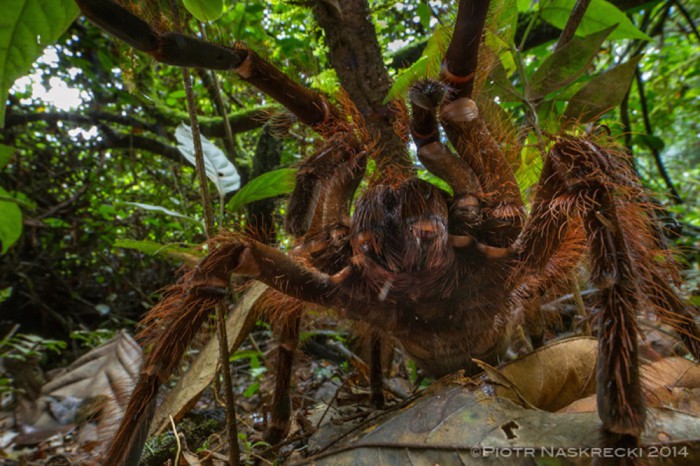 After thousands of comments about how he was a “HORRIBLE person” who “will destroy the Earth” and drive the Goliath birdeater to extinction, Naskrecki decided to take action. So in a classic bait-and-switch, he changed the URL of his original blog post — which was delivering hundreds of thousands of pageviews a day to his blog thanks to sites like Discovery, Gizmodo, and every local news site in existence — to a post about the importance of collecting specimens for scientific study. From his blog:

As I mention in the post below, Theraphosa blondi is indeed the largest spider in the world (although its legs are not a foot long, as some media reported), and thus it makes a perfect specimen for teaching spider morphology. It is also a very common species, not protected or endangered, and collecting of a single individual poses absolutely no threat to its survival (a scientist picking up one spider is no different from a bird doing the same; if a stochastic event such as this can drive a species to extinction then this species is already doomed.) In fact, you can purchase Goliath birdeaters in many pet stores in the US or online for $20-100 a piece. But they are shy and elusive, and thus I was thrilled every time I saw one during a small handful of encounters with this species. Once the animal was properly euthanized and preserved, something that is never done lightly, it was carefully labelled and deposited in the collection in Guyana where to this day it serves as an important teaching tool. And, years from now, the same specimen may provide new data on spider anatomy, genetics, evolution etc. 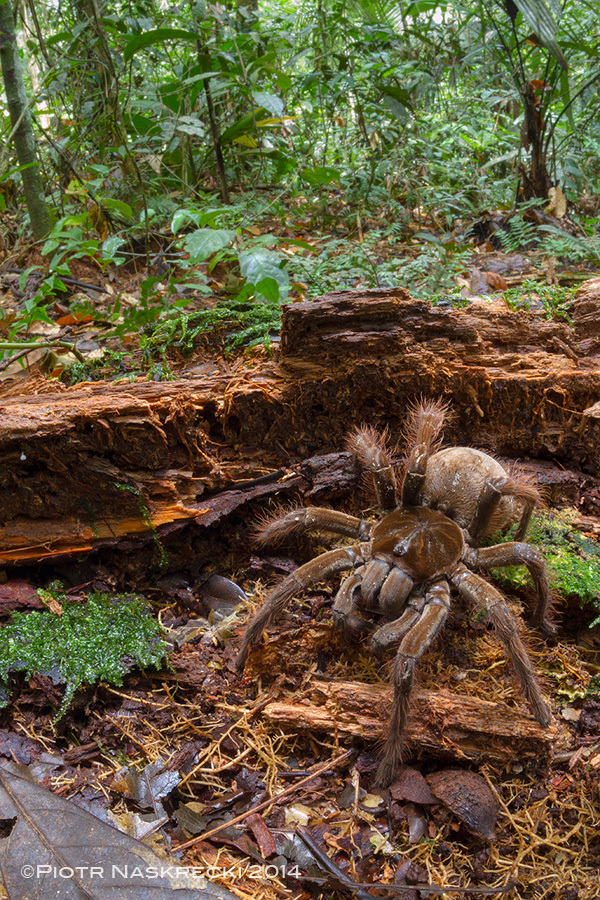 Piotr also noted that most of the articles published about the spider either greatly exaggerated or completely misunderstood the facts about the goliath birdeater, an unfortunate side effect of the rapid-fire read-and-repost style of reporting employed by most news sites today. Gizmodo, for example, conflates two stories Naskrecki shared about the Goliath birdeater in his blog post into a single incident. Though, to be fair, his encounter with the spider a few years before is a pretty cool one worth sharing.

Every time I got too close to the birdeater it would do three things. First, the spider would start rubbing its hind legs against the hairy abdomen. “Oh, how cute!”, I thought when I first saw this adorable behavior, until a cloud of urticating hair hit my eyeballs, and made me itch and cry for several days. If that wasn’t enough, the arachnid would rear its front legs and open its enormous fangs, capable of puncturing a mouse’s skull, and tried to jab me with the pointy implements. The venom of a birdeater is not deadly to humans but, in combination with massive puncture wounds the fangs were capable of inflicting, it was definitely something to be avoided. And then there was a loud hissing sound. For a long time the source of the sound was a mystery, but now we know that it is produced by “setal entanglement” – some of the hairs (setae) on the legs are covered with microscopic hooks that scrape against other, feather-like setae, producing the loud warning hiss.

So yeah, that’s pretty terrifying, not to mention that, because of its size, the birdeater is the only spider that makes noise while it walks, “not unlike that of a horse’s hooves hitting the ground.”

Despite Naskrecki’s thorough explanation, he is still receiving negative comments on his site..

Probably the same people who said that dressing a dog like a spider to scare people was animal cruelty. Sometimes you just can’t win.

Enter to win a pair of tickets to attend The Hess Collection Seminar and Dinner as part of Boston Wine Festival 2018 at the Boston Harbor Hotel on Wednesday, March 14th. END_OF_DOCUMENT_TOKEN_TO_BE_REPLACED

Boston band Funeral Advantage is Tyler Kershaw. And Tyler Kershaw had a fun childhood, so it seems. END_OF_DOCUMENT_TOKEN_TO_BE_REPLACED

Perry put me on to daephne and the album blew my mind. END_OF_DOCUMENT_TOKEN_TO_BE_REPLACED

END_OF_DOCUMENT_TOKEN_TO_BE_REPLACED

Ted Regan of the family-owned and operated Mass Bay Lines joined me in studio this morning. This summer, Mass By Lines is celebrating their 50th anniversary by adding a variety of specialty cruises to their well-known Harbor Tours, Sunset Cruises, and Starlight Cruises. Click here to enter to win VIP passes that will get you on to any cruise for free for the entire summer! Click through to listen to my chat with Ted. END_OF_DOCUMENT_TOKEN_TO_BE_REPLACED