Did you hear about the 2014 pumpkin spice latte shortage? No? That’s because it doesn’t exist thanks to people like Harvard Professor Charles M. Lieber growing big-ass pumpkins for the sake of science and competition.

Lieber, whose 1,870 pound pumpkin was named the biggest in Massachusetts and 17th largest in the world this year, used his science expertise in a trial-and-error process to find the perfect approach to creating behemoth gourds, as detailed in a profile in The Harvard Crimson. 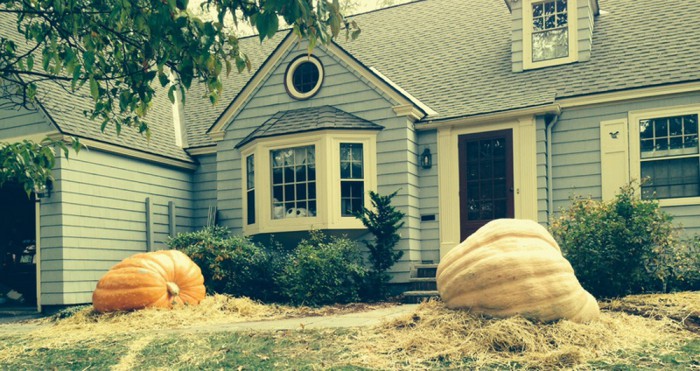 The steps, which involved “germinating the seeds, monitoring a temperature-controlled greenhouse, and pollinating the plant by hand,” were just the beginning of a long and careful process which required the help of organic fertilizers, symbiotic bacteria and fungicides (both hurtful insults that I was called on the playground as a child), and other tools to help ward away insects and diseases. It’s cool though, the elaborate procedure of enormous pumpkin growing is a cathartic experience for Lieber, who says “I just decided to give it a try for relaxation, stress relief from work.”

Different strokes for different folks, I guess– my head is already hurting just from writing this article. For all those who think that growing a massive pumpkin is just some back-country game though, eat your words (with a side of pumpkin pie), because clearly there’s some genius involved in sprouting vegetables that are half the size of an average car.

Here’s to hoping he can grow a gigantic pizza someday. Until then, color me half-impressed.

Enter to win a pair of tickets to attend The Hess Collection Seminar and Dinner as part of Boston Wine Festival 2018 at the Boston Harbor Hotel on Wednesday, March 14th. END_OF_DOCUMENT_TOKEN_TO_BE_REPLACED

This should never have happened. END_OF_DOCUMENT_TOKEN_TO_BE_REPLACED

I spend far too much time on Twitter. Here’s a handful of posts from last year that I found to be entertaining on one level or another. Enjoy. END_OF_DOCUMENT_TOKEN_TO_BE_REPLACED

Apologies in advance for burying this in your skull forever. END_OF_DOCUMENT_TOKEN_TO_BE_REPLACED

If you like cover songs, you’re gonna love this. And by love, we mean probably hate. END_OF_DOCUMENT_TOKEN_TO_BE_REPLACED

Whether you celebrate the unofficial beginning of summer on Memorial Day weekend, or Meteorological Summer on June 1, or the Summer Solstice, make no mistake: summer is here. END_OF_DOCUMENT_TOKEN_TO_BE_REPLACED

The nu-metal mainstays have covered the unlikeliest of songs. END_OF_DOCUMENT_TOKEN_TO_BE_REPLACED