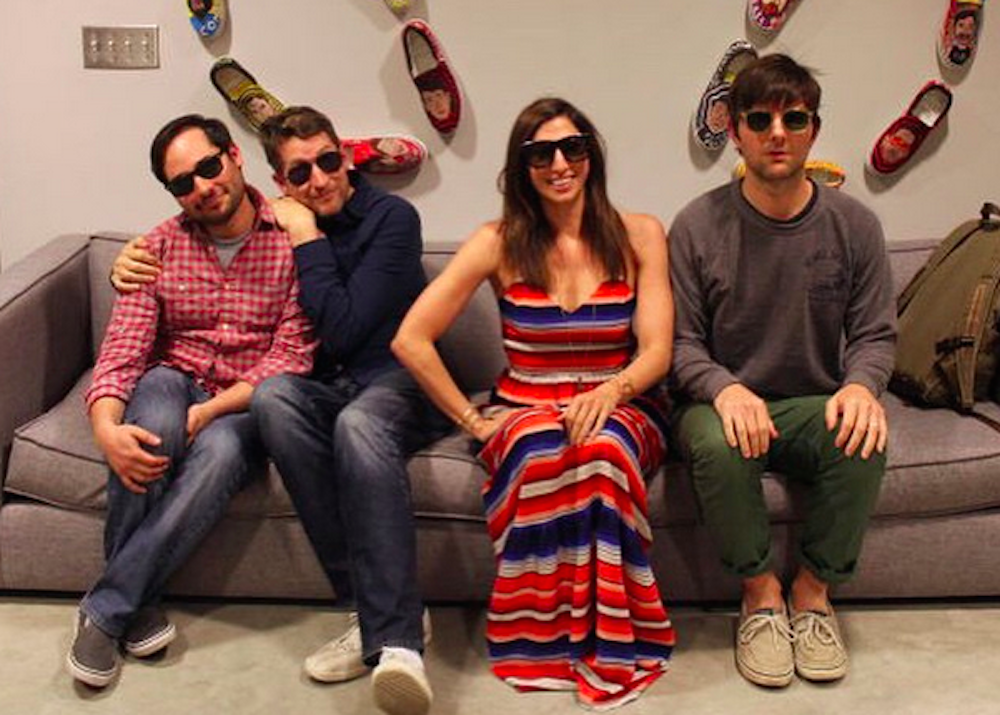 Last week, Emerson alumnus and Parks and Recreation producer Harris Wittels passed away of a suspected heroin overdose at the age of thirty, sending waves of shock and grief through the comedy community. Wittels was a promising talent who had written for Parks and Rec, Eastbound and Down and The Sarah Silverman Program, performed brutally honest, aggressively silly standup for years and invented the now-iconic term “humblebrag.”

Of all his accomplishments, fans were best able to get to know Wittels through his podcast appearances on the Earwolf network, particularly over the years on Scott Aukerman’s Comedy Bang! Bang!, which was ultimately adapted for TV on IFC with co-host Reggie Watts. Wittels has appeared on the show countless times, particularly on episodes with his Parks and Rec co-workers. After some debate over whether to release his final appearance on the show, CBB‘s host released “NOT Farts and Procreation 4” this morning.

“I don’t think I am the perfect person to eulogize Harris,” Aukerman admitted in the opening of the podcast. “There were plenty of people who knew him better – his old friends from Emerson, his co-workers on Parks and Recreation, his bandmates in Don’t Stop or We’ll Die, his friends in his sketch and improv teams at UCB.”

Before playing the podcast, recorded on February 11th, Aukerman spoke of a party he and his wife (fellow comedian Kulap Vilaysack) gathered friends of the late comedian to share their favorite, often weird memories of Wittels and brought attention to the fact that some of his most memorable moments took place in his podcast appearances on Aukerman’s Comedy Bang! Bang!, U Talkin’ U2 To Me?, Who Charted? and Wittels’ own podcast with Aukerman, Analyze Phish.

The new episode of CBB includes some signature dark bits as were famous in earlier installments of “Farts and Procreation” with Aukerman, Wittels, Parks actor Adam Scott and former  Parks writer and Brooklyn Nine Nine actress Chelsea Peretti. Included in the episode is the final segment of popular recurring bit “Harris’ Foam Corner,” where Wittels would read jokes he had texted himself that were, at best, half-baked and not ready for Twitter.

Prepare yourself for the last five minutes – they’re hilarious and sad and there’s a Phish song playing underneath the whole thing.

In the days since his passing, Wittels’ comedian friends have been dealing with the loss as comedians are wont to do – they made it a joke.

one is you thank someone but call them the wrong name

another is tell the condoler that u actually don't really care that much! 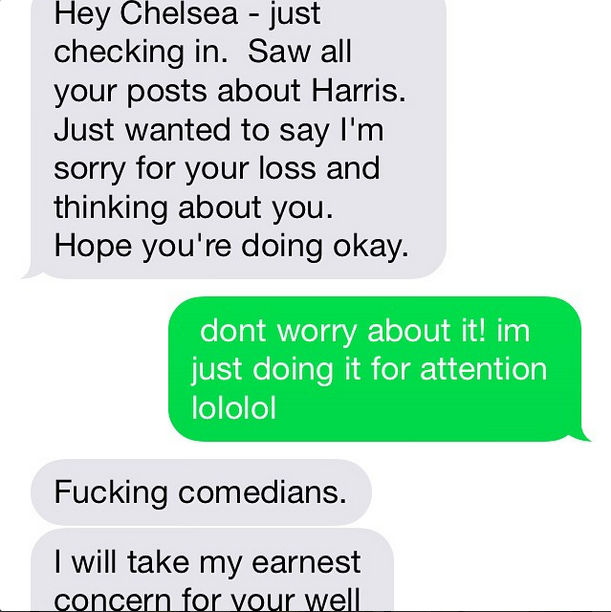 And what many friends are saying would have been Wittels’ favorite tribute: the famously bigoted Westboro Baptist Church protesting him:

In LA today warning of your fate if you won't repent of sins #HarrisWittels is perfect example @funnyordie pic.twitter.com/TRpOkAnBgr

Finally, a bit Wittels recorded called “Harris in Heaven” surfaced this week, providing fans one more thing to laugh-cry over.

“A lot of people want to do serious stuff with their comedy…” Aukerman recalled Wittels telling him the last time they spoke. “I just think motherf***ers wanna laugh.”

Comedian Myq Kaplan is a comedian named Myq Kaplan. He joined me in studio this afternoon, and he’s at Laugh Boston this weekend. Click here for tickets. END_OF_DOCUMENT_TOKEN_TO_BE_REPLACED

My goodness, I love Sue Costello. It was great having her back in studio today to talk about her one-woman show, #IAmSueCostello, playing tonight at the Revere Hotel. Click here for tickets. END_OF_DOCUMENT_TOKEN_TO_BE_REPLACED

Trump Takes On…Boston! is running now through election night at Laugh Boston. David Carl was back in studio this afternoon to talk about bringing Donald Trump to the stage, the cathartic element (for both him and the audience) and how audiences have been reacting so far. END_OF_DOCUMENT_TOKEN_TO_BE_REPLACED

Trump Takes On…Boston! has arrived at Laugh Boston. I had comedian David Carl, who is portraying Trump, in studio this morning to talk about the show. END_OF_DOCUMENT_TOKEN_TO_BE_REPLACED

Lachlan Patterson made me laugh this morning. Let him make you laugh this weekend at Laugh Boston. Click here for tickets, and click “more” to hear our conversation. END_OF_DOCUMENT_TOKEN_TO_BE_REPLACED

Always a pleasure to have Boston.com’s Perry Eaton in studio for a chat. After we talked a bit about Pearl Jam at Fenway and Perry’s new podcast, he filled us in on Game of Thrones live and Narragansett’s new Bananagrams-themed brew. END_OF_DOCUMENT_TOKEN_TO_BE_REPLACED

It was great to have Alonzo Bodden back in the RadioBDC studio this morning. Don’t miss him at Laugh Boston this weekend! Click here for tickets and info, then click through to hear my interview. END_OF_DOCUMENT_TOKEN_TO_BE_REPLACED