Halloween in New England According to ’80s and ’90s Television Specials

Television can tell us a lot about ourselves, our region and our communities here in New England. Most of what it tells us is gibberish but, hey, moving pictures! It’s intellectual candy corn and we are going to eat the whole bag. Here are the big lessons we learned from our seasonal classic TV binge:

The number one lesson to be gleaned about Halloween in New England is that the power grid will fail, most likely the second you start telling scary story. Doesn’t matter if you’re on Beacon Street with Sam Malone, in Vermont with Bob Newhart or conversing with drunk cat in Salem, you are going to lose power.  Worried about an old stalker that’s escaped from an asylum a la Diane on “Cheers”? Powers gonna go out. Worried about aliens invading your inn? Power goes out. Trying to write an article about Halloween in New England in the midst of a Nor’Easter? Power goes out.

Cheers: On Netflix and Amazon
Forget the terrible snoozer of a film adaptation, and dive head long into the high camp of 1991s “Dark Shadows” TV reboot. The single-camera soap is of the same development-vintage as “Twin Peaks” — trends took forever back then! — but instead of FBI agents in the north woods you’ve got vampires on the Maine coast and a ten-year-old Joseph Gordon Levitt. It is hilariously over the top, the pulp-horror equivalent of a Sylvester Stallone arm-wrestling pic. The overacting is only to be outdone by “The Legacy of Borbey House”, the 1993 “Murder She Wrote” episode where Jessica Fletcher goes vampire hunting only to find grandma jokes and dumb teens.

“Murder She Wrote“: On Netflix 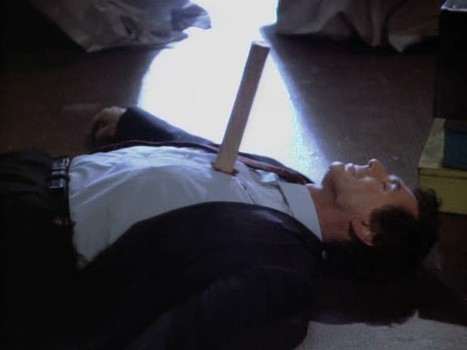 Well, duh. Downtown Salem is the America’s Favorite Goth Mall, the only place in America where you’re going to hear about coven politics while you’re in line for your pumpkin-splooge latte. So really, this is the one place where Hollywood gets it right. While the Salem-set “Sabrina The Teenage Witch” is magic-based show, the meta-local “Good Will Haunting” finds ghost-doll putting the crimp in Sabrina’s make-out plans, while her aunts’ party an asylum with legendary voice actor Gary Owens. Hilarity Ensues. The power goes out. If you’re looking for something more historically minded, might we suggest this classic “Animaniacs” episode instead? Singing animals are historically accurate, right?

“Animaniacs” on Amazon
SPOILER ALERT: I just ruined the punchline of a 17 year-old “Wings” episode. I mean, the original writers probably ruined it, because it was bad to begin with but, you know what I’m saying.  It doesn’t matter though because the real hilarity comes from Tony Shaloub’s recurring “Twister” joke. That’s right, a good portion of this episode is devoted to jokes about Jan de Bont’s disaster-schlock pièce de résistance, most of which involve a cow and Tony spinning in a circle. Must see TV, I tell ya. This was one of the last episodes before the show began it’s ‘Oh crap, we’re getting cancelled’ arc and you can feel it.
Am I the only person that has ever wanted to watch the Halloween episode of “2 Guys, a Girl  and a Pizza Place” without having to put down my laptop and venture into the real world? Probably. You’d think with both Ryan Reynolds and Nathan Fillion on the show the Internet would have willed multiple sources of readily accessible streaming into existence but…no. Maybe this Boston-based sitcom really was as bad as I remember it being? Sadly, these pics are all we have left: 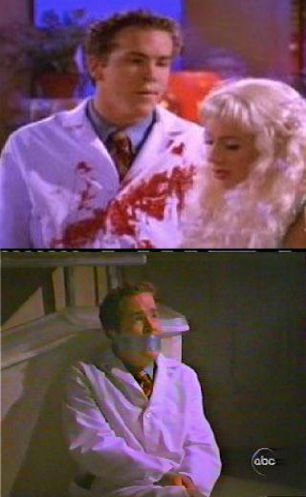 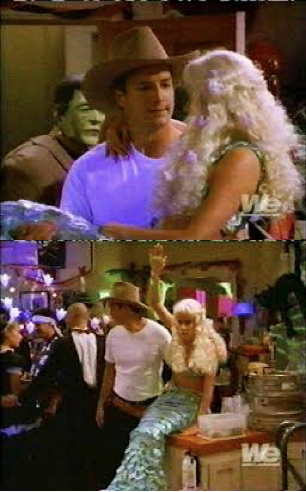