Grumpy Cat to Guest Host WWE ‘Raw’ Because Why the Hell Not? 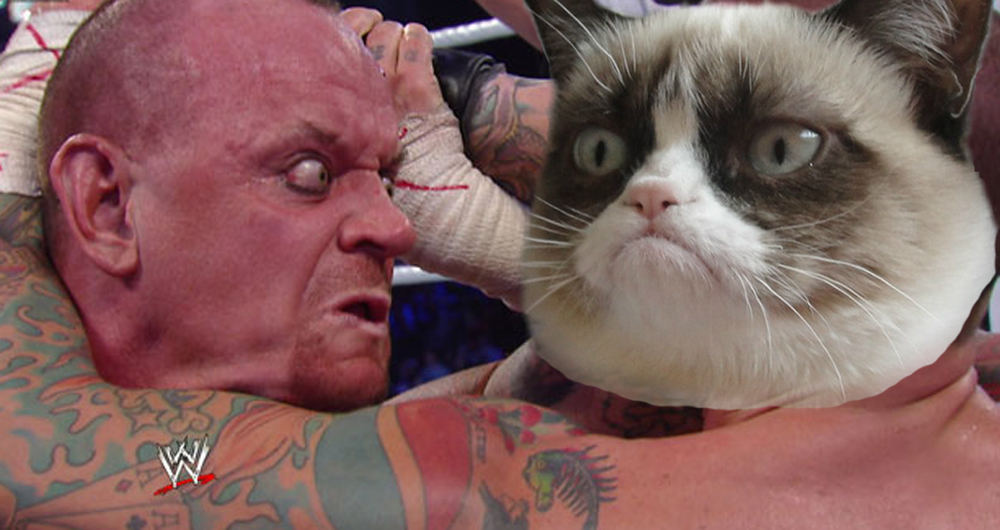 Just when we thought our petulant feline friend known as Grumpy Cat had gone into retirement, we were blessed last week with an early holiday miracle– the announcement of her upcoming Lifetime original seasonal special, “Grumpy Cat’s Worst Christmas Ever.” The good news doesn’t stope there, though. The disgruntled furball will now star as guest host on WWE “Raw” next Monday, November 17. There is a kitty god!!!

WWE’s marketing team sure does know its demographic– nothing screams overtestosteroned scripted fighting like cute fuzzy animals that will soon be Lifetime stars. But something about this does make sense. WWE fans love themselves a good gimmick, whether it be giving equal honors to A-listers to the likes of Kevin Federline and Dennis Rodman, or simply allowing grown-ass men and divas alike to throw metal chairs at each other for the sake of entertainment. It’s a formula that has worked for Vince McMahon’s empire since the very beginning, and it’s a formula that will give Grumpy Cat the spotlight she deserves in the sports world.

WWE put out a press release to announce why they chose Grumpy Cat, as opposed to maybe Keyboard Cat or that Cat that rides the Roomba around:

“‘WWE’s mission is to put smiles on people’s faces – and now we will attempt the same with Grumpy Cat,’ said WWE Chief Brand Officer, Stephanie McMahon. ‘We are going to do everything in our power to make sure she has a good time.’

Monday Night Raw is the longest-running, weekly episodic program in U.S. primetime TV history and is the most-watched, regularly scheduled programs on cable, airing live every Monday night on USA Network. Each week, it is rated one of the most socially active shows on cable television and continues to be a “must-stop” for celebrities to reach WWE’s TV audience and its more than 420 million social media followers.”

This is a step forward for cats around the world, as clearly the WWE has a large and impressionable audience. This could mean more cats finding more homes nationwide, or at least a spike in pizza sales (because cats love pizza, of course). Just don’t break this news to our favorite Undertaker fan, his heart might stop again.

The Black and Gold continue their run tonight at TD Garden. END_OF_DOCUMENT_TOKEN_TO_BE_REPLACED

Who will make the Class of 2018? END_OF_DOCUMENT_TOKEN_TO_BE_REPLACED

It’s been awhile since we talked Black and Gold. END_OF_DOCUMENT_TOKEN_TO_BE_REPLACED

You’re going to wish you were in the Northern Alps. END_OF_DOCUMENT_TOKEN_TO_BE_REPLACED

END_OF_DOCUMENT_TOKEN_TO_BE_REPLACED

Bill might be “on to Tennessee,” but we’re not. END_OF_DOCUMENT_TOKEN_TO_BE_REPLACED