Grammys Style At A Glance: The Good, The Weird and The Daring 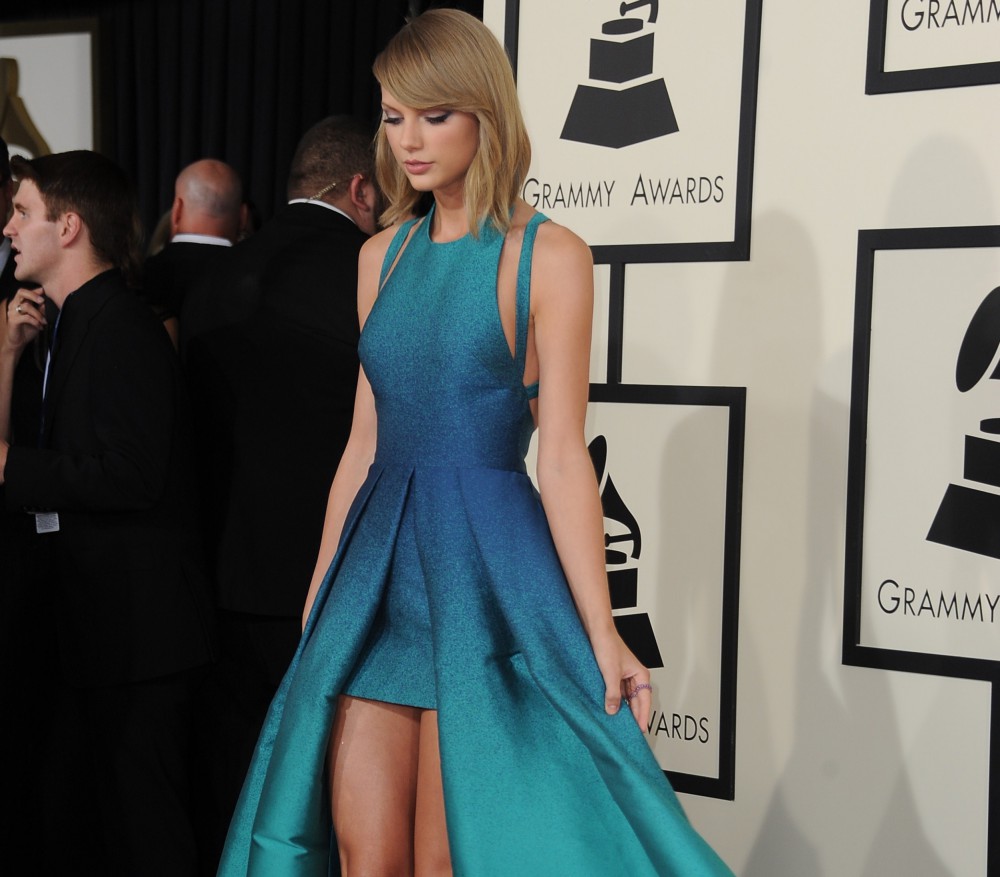 When the set precedent for the Grammys red carpet is Lady Gaga hatching out of an enormous egg, the looks on the 2015 carpet may have been a bit underwhelming. While the stars behaved themselves, there was no shortage of risks taken and memorable ensembles.

Here are some of the looks that made waves for better, worse, or a little bit of both: 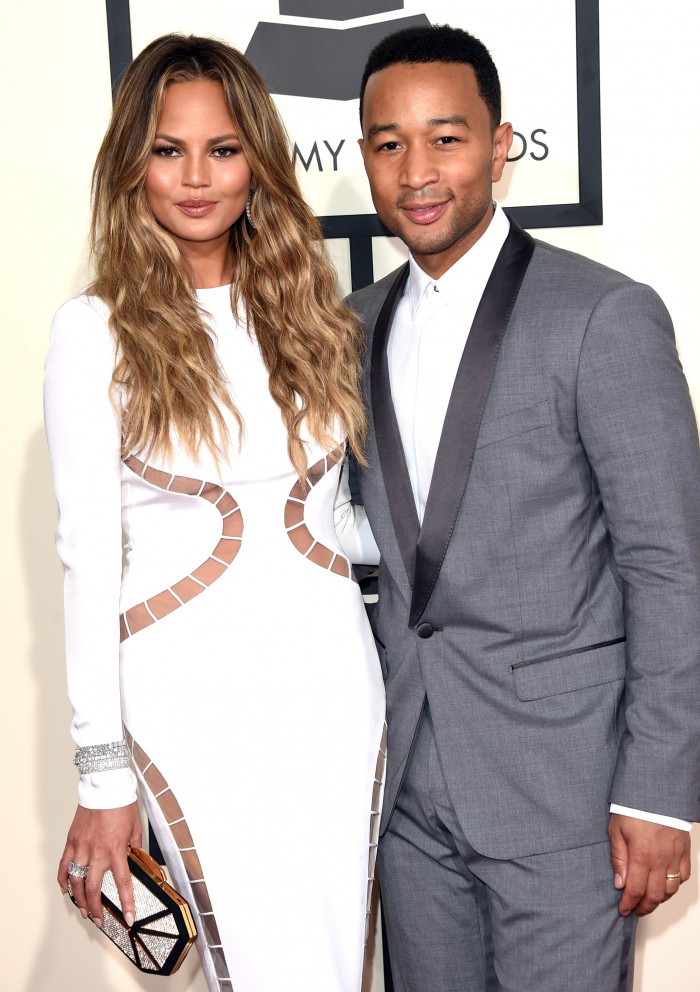 And hottest couple of the night goes to…sorry, Kim and Kanye, Chrissy and John owned their look on the red carpet. No hard feelings, though – the two couples are great friends, and went on a double date to Waffle House before the Super Bowl last week. 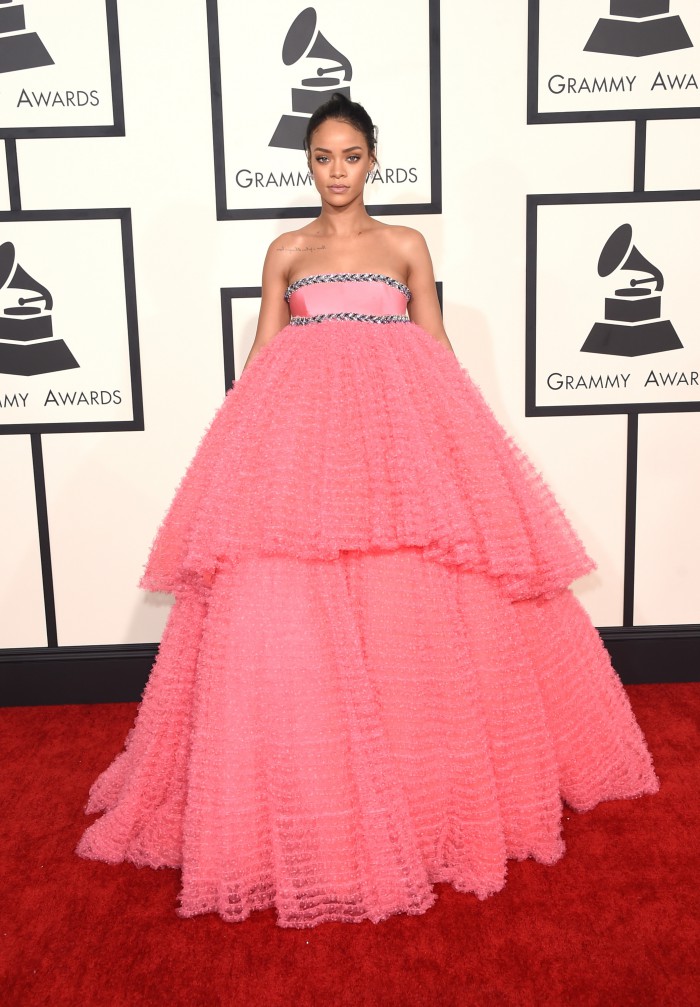 A late arrival to this year’s red carpet in this Giambattista Valli nearly swallowed the “Only Girl” whole in the cupcake-like confection that could have contained any number of people, Grammys or secrets beneath its many tiers. 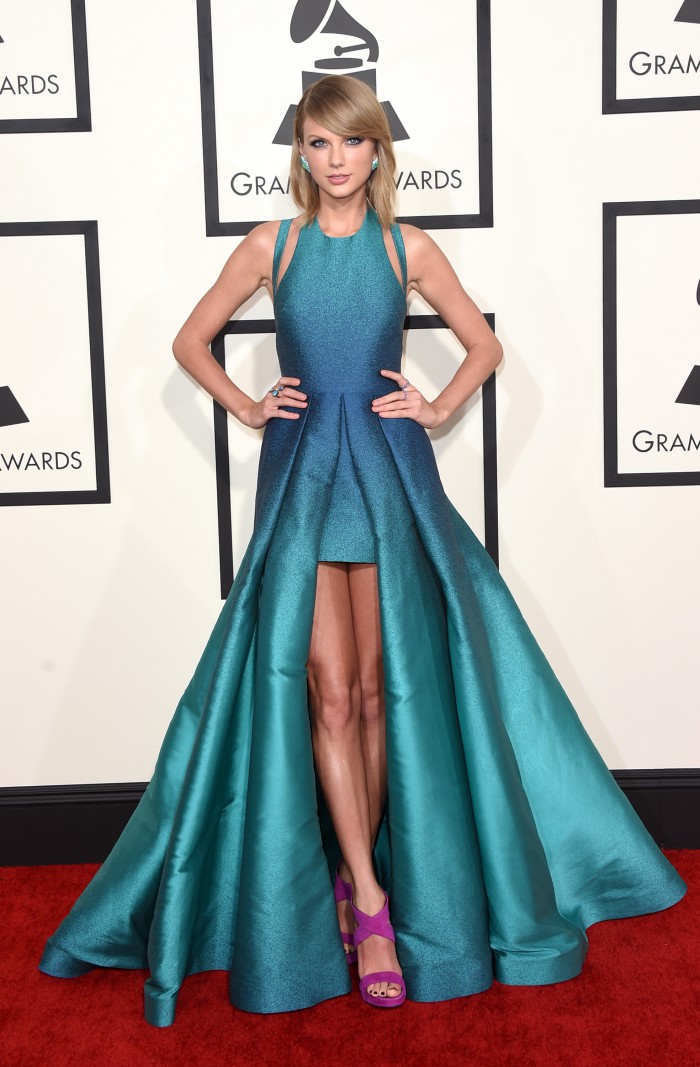 Where Swift became famous for soft curls and tiaras flanked by an acoustic guitar, the starlet has taken a turn for the daring this year in an iridescent teal with bright purple shoes for an even bigger statement. Match that with straightened, shorter hair and we’ve got a brand new Taylor on our hands. 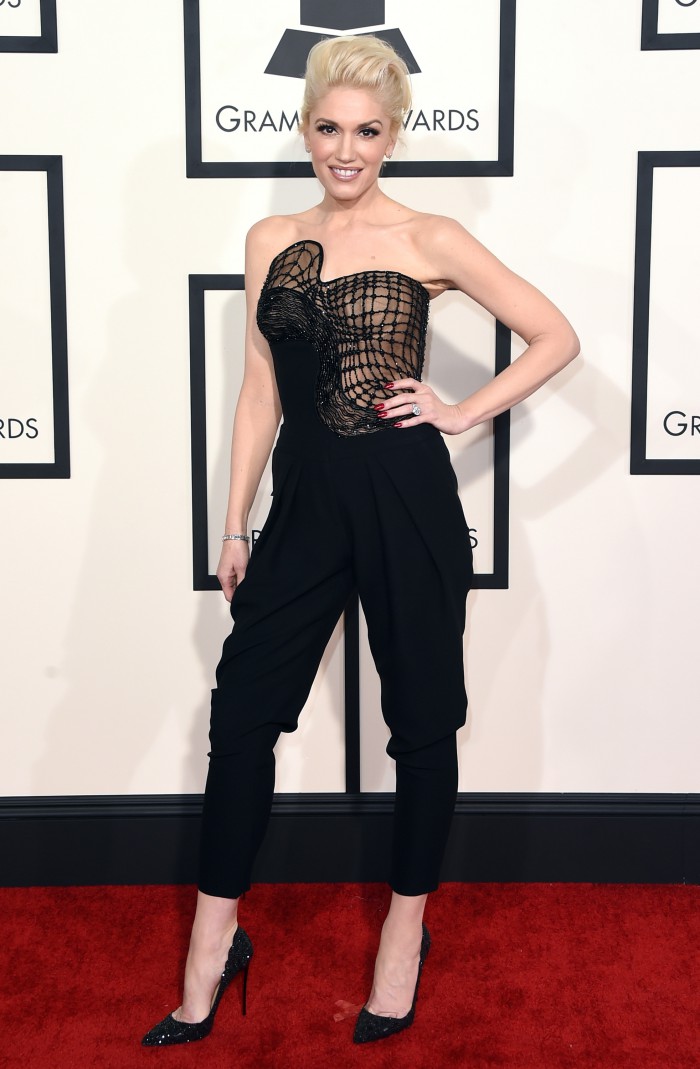 You’re hard pressed to find a lady wearing pants on the red carpet, but Gwen Stefani looks better than ever in this Atelier Versace getup, complete with sparkly pumps and a swept-up hairdo. It takes a true pro to look effortlessly gorgeous and reasonably comfortable when walking the walk, and the hollaback girl makes it happen. 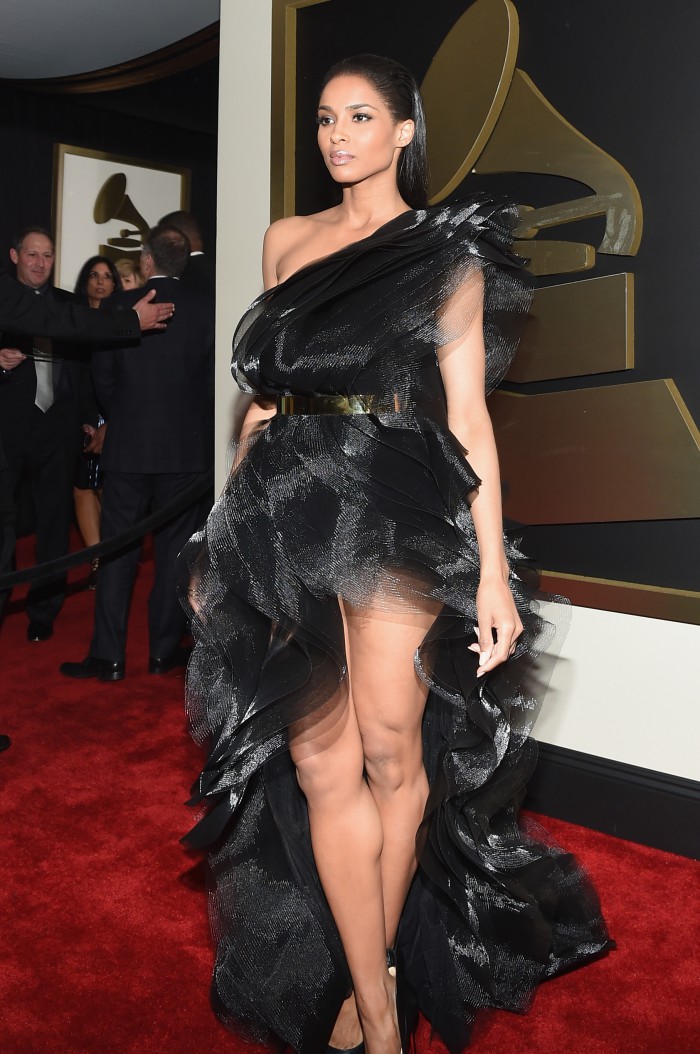 It certainly wasn’t the most colorful year on the Grammys red carpet, but Ciara made up for lack of pigment in abundance of texture in this, ahem, interesting number that many have compared to a loofah on first look. It’s grown on me the smallest but, but come on, Ciara – is this the look of someone who’s aiming to make a major comeback? 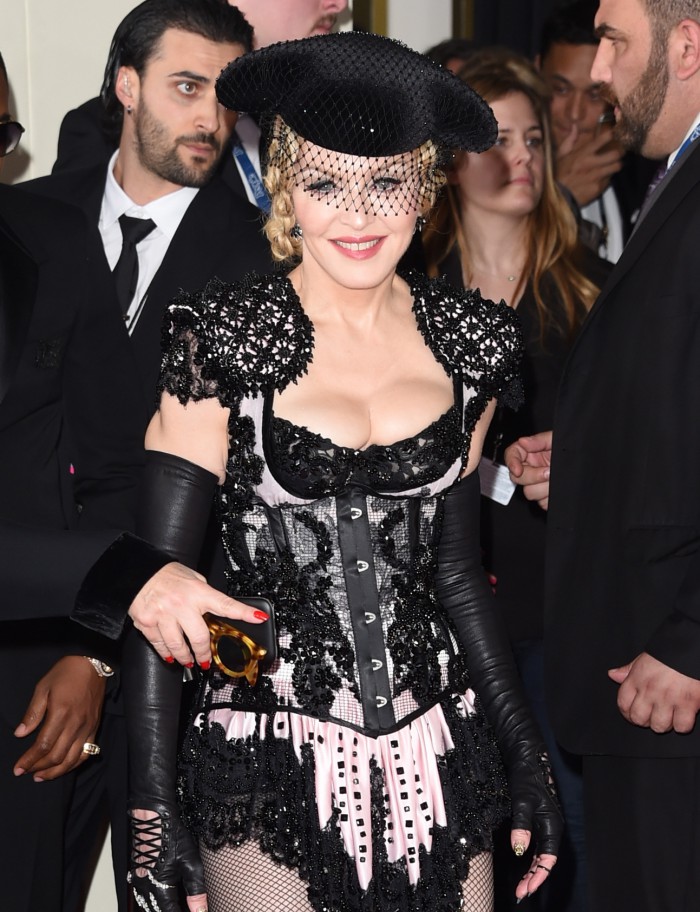 Is Madonna throwing back to her own music video for “Take a Bow” in this matador getup? Flashing butt cheeks and all, it was an incredibly bold move for the 56-year-old legend that definitely turned heads. 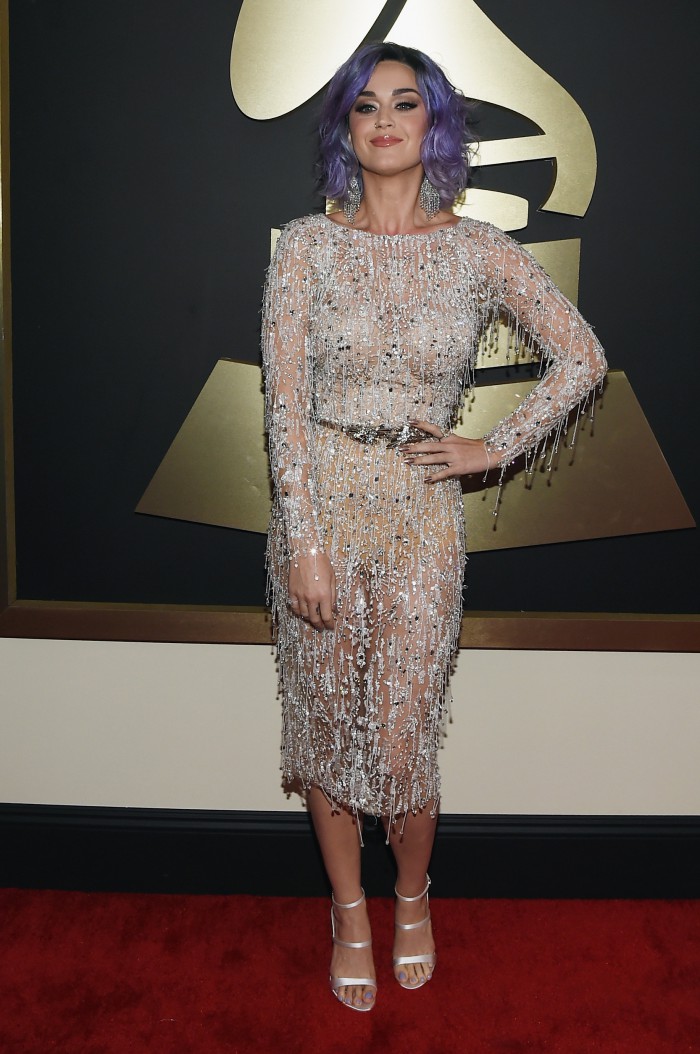 Fresh off her majorly successful Super Bowl performance last Sunday night, Katy Perry stepped out in this Zuhair Murad dress that dripped with sparkles sporting a new hair hue, a lavender dyed special for the occasion. She joked to Ryan Seacrest, “I just want to shine bright like a diamond!” in reference to peer Rihanna’s famous song. Props. 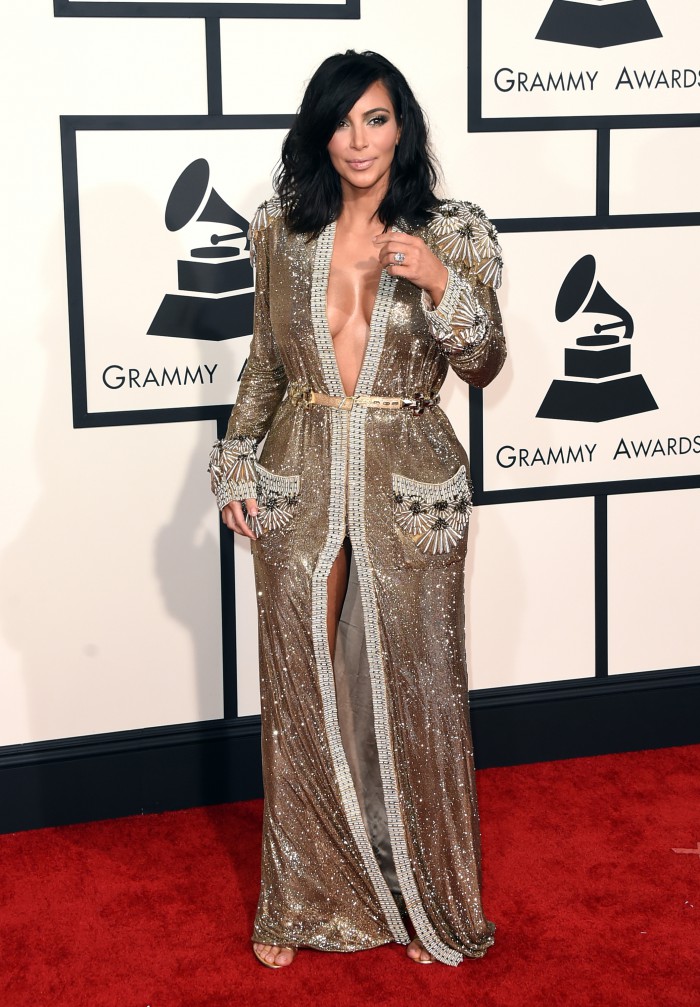 Granted, when Kim washes her hair, it makes headlines, but her outfit at the Grammys this year was certainly a statement of…comfort? A desire to take a long soak in a bath? We’re not quite sure. Kanye praised the Jean Paul Gaultier gown on the red carpet and she looks fabulous as usual, but with every designer and dress in the world to choose from, this one’s a bit of a head scratcher.

The Daring: Helen Lasichanh and Pharrell 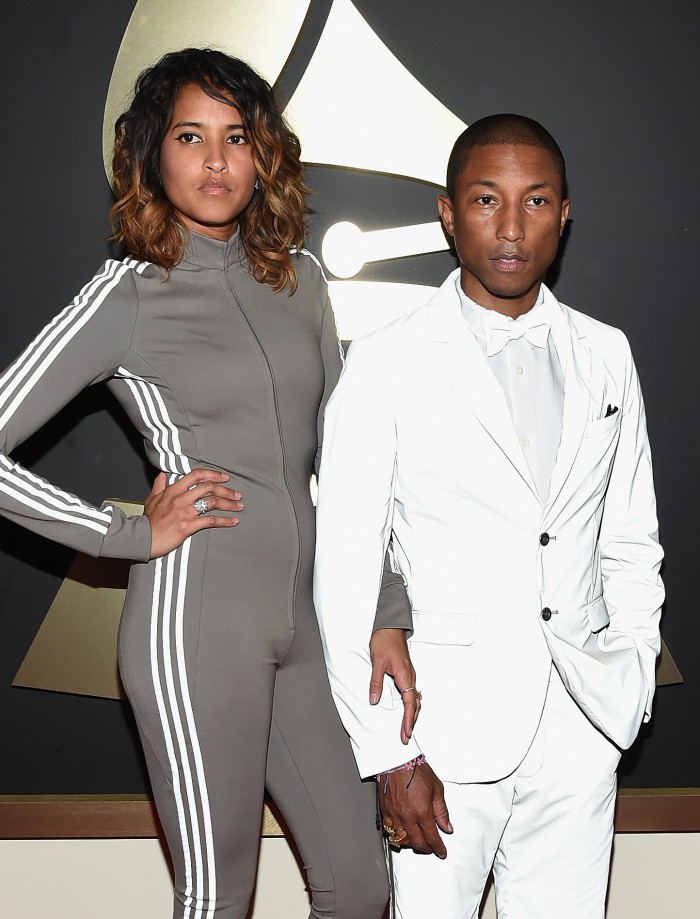 While her husband dominated the style headlines at last year’s Grammys with his infamous hat, Pharrell’s somewhat reclusive wife Helen Lasichanh made a bold statement tonight with her hubby. A few hours later, he’d go on to scoop up a couple of fancy trophies to tote home in that track suit onesie. Respect.

Dying for more Grammys outfits to remember? Let us know!

Note to Charli XCX: there’s a line between homage and parody, girl.

Enter to win tickets to see Trio Da Kali at The Villa Victoria Center of the Arts (Newton, MA) on April 10th. END_OF_DOCUMENT_TOKEN_TO_BE_REPLACED

END_OF_DOCUMENT_TOKEN_TO_BE_REPLACED

Enter to win tickets to Rhye at The Paradise on February 28th. END_OF_DOCUMENT_TOKEN_TO_BE_REPLACED

Her new album has been pushed back, but we have Kimbra’s new single for you. END_OF_DOCUMENT_TOKEN_TO_BE_REPLACED

The folk duo returns with a new record this week. END_OF_DOCUMENT_TOKEN_TO_BE_REPLACED

Now that we’re done looking back at 2017, let’s look ahead at 2018. END_OF_DOCUMENT_TOKEN_TO_BE_REPLACED

Our first Song of the Week for 2018. END_OF_DOCUMENT_TOKEN_TO_BE_REPLACED

In a year when so many things were off, the music was right on. END_OF_DOCUMENT_TOKEN_TO_BE_REPLACED