Grammys Aside, Beck is in a Different Class than Beyoncé 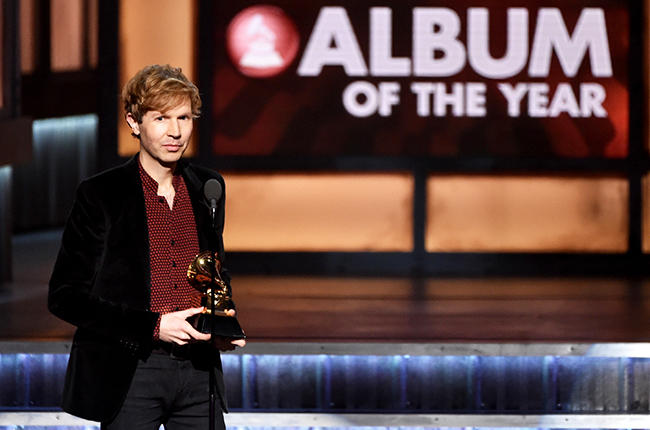 Let’s cut through the noise and take a hard look at what sets Beck apart from Beyoncé. And it’s not a Grammy award.

First, an obligatory reminder that the Grammys aren’t to be taken seriously. My two favorite fails: Bon Iver winning Best New Artist in 2012–four years after releasing his debut album–and the infamous “How-the-hell-did-Jethtro-Tull-beat-Metallica” Best Hard Rock/Metal Performance Vocal or Instrumental moment from 1989. This isn’t about “who deserved the Grammy more: Beck or Bey?” The award itself is has little meaning.

And it’s not about Kanye West, either. Kanye is Kanye, and Kanye continues to undermine his talent with his antics. If anything, more Grammy night tsking should have been directed at Epic Records President Sylva Rhone, who tweeted (then deleted) this:

To be fair, Beck’s PR firm Nasty Little Man played a little tweet-then-delete, too. So much drama over who won and who didn’t win a silly little statue. So let’s set the statue (and the drama) aside and take a closer look at the difference between the two artists.

Does Beyoncé initiate and have input in the creative process on her records? Absolutely. Does Beck enlist the help of other producers and musicians when crafting his albums? Of course. But what sets the two apart is this: Beck can create compelling, “award-winning” records all by himself. Queen Bey can’t.

Now there would be a happy ending to this story line: a Beck-Beyoncé collaboration. Just keep Kanye out of it. And don’t release it on Epic.

Enter to win tickets to see Trio Da Kali at The Villa Victoria Center of the Arts (Newton, MA) on April 10th. END_OF_DOCUMENT_TOKEN_TO_BE_REPLACED

END_OF_DOCUMENT_TOKEN_TO_BE_REPLACED

Enter to win tickets to Rhye at The Paradise on February 28th. END_OF_DOCUMENT_TOKEN_TO_BE_REPLACED

Click here to see where we’ll be the rest of the season! END_OF_DOCUMENT_TOKEN_TO_BE_REPLACED

END_OF_DOCUMENT_TOKEN_TO_BE_REPLACED

Enter to win a pair of tickets to attend The Hess Collection Seminar and Dinner as part of Boston Wine Festival 2018 at the Boston Harbor Hotel on Wednesday, March 14th. END_OF_DOCUMENT_TOKEN_TO_BE_REPLACED

The Black and Gold continue their run tonight at TD Garden. END_OF_DOCUMENT_TOKEN_TO_BE_REPLACED

Her new album has been pushed back, but we have Kimbra’s new single for you. END_OF_DOCUMENT_TOKEN_TO_BE_REPLACED