Grab Your Cowboy Boots, Line Dancing Is Becoming a Thing in Boston 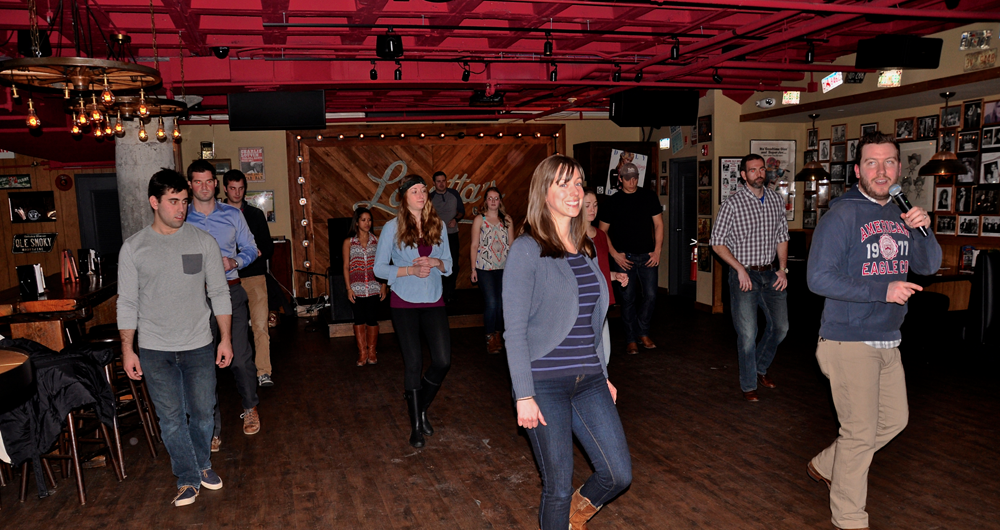 Every Tuesday night, Colin Riggs breaks out his cleanest flannel shirt, some crisp blue jeans, and a pair of cowboy boots. The boots can’t keep his feet warm and dry, but he isn’t too worried. Riggs will spend most of the night on the dance floor at Loretta’s Last Call, the country western bar and restaurant across the street from Fenway Park.

“There’s just something about it that I like,” the Duxbury native tells me. “I love the music, and I love being able to dance to it with others.”

One of its most popular attractions, though, is line dancing.

This is a good thing for Boston. No, seriously. Boston is a city of transplants, and more and more of its newest members are coming from the west coast, the southwest, and the American South. “Honky Tonk” culture is a big part of these peoples’ lives, and though not all of them are its biggest fans, the music’s influence on Boston is undeniable.

According to the Boston Globe, country music and the culture that accompanies it have been on the rise in New England for the past few years. But there’s something particular about this wave that’s often left Boston proper out of the mix. As the Globe puts it, “the suburbs are becoming more than a little bit country.”

This should come as no surprise, considering the crowds at venues like The Ranch in Worcester and Toby Keith’s I Love This Bar in Foxborough. But with more and more performances by well-known regional musicians like Robert Earl Keen in the city limits, the dancing is steadily moving into the city. More often than not, enthusiasts and newcomers alike are brandishing their boots without leaving town. 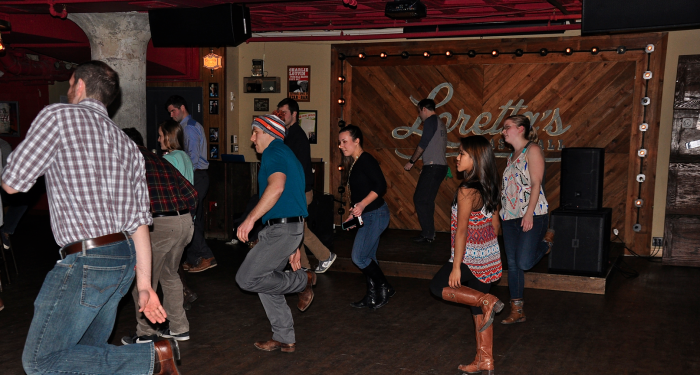 The choreographed, song-based form stems back to the 1950s on the west coast, but its country offspring specifically started during the late 1970s. Pop culture fully embraced it with the film Urban Cowboy (1980), in which Jon Travolta’s turn as “Bud” stemmed interest in popular country music and the various dances it engendered.

Many types of dance are associated with country music today, but the two most prominent are line dancing and two-step. What’s the main difference between the two? Numbers, it’s all about numbers. Two-step generally requires a pair of dancers who take turns leading one another across the floor with certain staple movements and special flairs. Meanwhile, line dancing is a group activity.

“That’s what I like the most about it,” says Riggs. “It’s more than just the music. Line dancing is a community thing, you know. It brings a big group of people together, all to enjoy the same activity.”

Loretta’s country line dancing lessons aren’t just another form of entertainment – they’re a communal experience. Regulars like Riggs have been coming every Tuesday night since August, meeting for after-work drinks and learning how to dance. Some like Riggs are locals, while others are transplants from as near as Maine and as far as Texas.

“Line dancing wasn’t immediately offered as a regular thing, but we definitely wanted to include it,” says Loretta’s general manager Erica Dorsey. “We were bringing up and coming acts out of Nashville, so it made sense to offer dancing, too.”

Dorsey, who hails from northern Maine, had country music impressed upon her by the rural farming culture she grew up in. Dancing occurred much less than the music, but with Loretta’s regular import of Nashville-based musicians, she and the staff hope to make line dancing a regular part of the city night life. 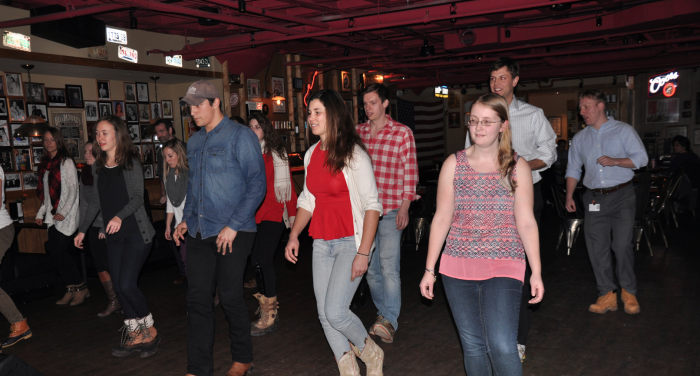 So where do you learn how to line dance?

Enter Zeke Sublett, a professional ballroom instructor, DJ, and event emcee who works and lives in the greater Boston area. Sublett first heard about Loretta’s when a friend suggested that he and his wife April reach out to the staff. Maybe, said the friend, the pair would be interested in giving lessons. The new spot advertised itself as a country western bar, but said nothing about dancing.

Zeke contacted Dorsey and offered his services. Soon after, Loretta’s changed its advertising to include a new weekly feature – line dancing lessons every Tuesday night at 8 p.m. The lessons were free to all customers, and were meant to be inclusive.

“I didn’t want to alienate anyone who came to the bar,” Zeke tells me. “So whether you’re an experienced dancer or you’ve never danced a step in your life, I wasn’t about to shut people out. I wanted them to get out on the floor and have a good time.”

Watching Zeke and April in action is like watching a well-oiled dancing machine. First, Zeke dons his emcee hat and cheers on the crowd at the bar. Some are already there for the lessons, but most don’t even know what’s about to happen. That’s OK, because Zeke makes sure to let everyone know the deal.

“Alright everybody! Welcome to Loretta’s Last Call on this wet Tuesday night. Make sure to grab yourself a drink and head out to the dance floor. We’ve got line dancing tonight, and we’ll be getting started soon.”

Sure enough, a few of the regulars immediately take their positions. One or two newbies join them, but the first dance generally draws a smaller batch.

“That’s OK,” says Zeke. “After the warmup, more people will leave their tables and join in on the fun.”

And that’s exactly what happens during the two hours that follow. With each new set of moves, Zeke walks everyone through the necessary steps. April mimics him move-for-move. Once the group, which numbers in the thirties now, is ready to begin, Zeke stays up front while April cues the song and takes her spot on the main stage.

For four minutes and some change, everyone does their best to follow the moves outlined by Zeke and April. A few of the regulars have graduated to the intermediate level, while the majority of the participants do their best not to step on each others toes. But you always know when they do, as apologies and laughter quickly occupy the floor.

“Great job, everybody!” says Zeke over the PA system. “Let’s take a break everyone. Grab a drink, sit down for bit, then we’ll see you back up here for the next song.”

Enter to win tickets to see Trio Da Kali at The Villa Victoria Center of the Arts (Newton, MA) on April 10th. END_OF_DOCUMENT_TOKEN_TO_BE_REPLACED

END_OF_DOCUMENT_TOKEN_TO_BE_REPLACED

Enter to win tickets to Rhye at The Paradise on February 28th. END_OF_DOCUMENT_TOKEN_TO_BE_REPLACED

Enter to win a pair of tickets to attend The Hess Collection Seminar and Dinner as part of Boston Wine Festival 2018 at the Boston Harbor Hotel on Wednesday, March 14th. END_OF_DOCUMENT_TOKEN_TO_BE_REPLACED

Her new album has been pushed back, but we have Kimbra’s new single for you. END_OF_DOCUMENT_TOKEN_TO_BE_REPLACED

It’s been a crazy week with all the snow. We need a drink. END_OF_DOCUMENT_TOKEN_TO_BE_REPLACED

The folk duo returns with a new record this week. END_OF_DOCUMENT_TOKEN_TO_BE_REPLACED