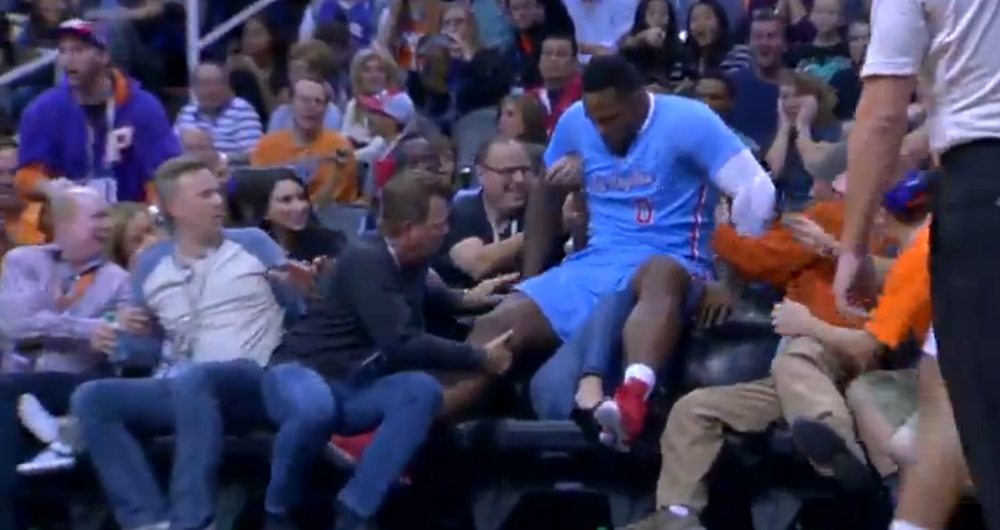 Glen Davis, known fondly to Celtics fans as “Big Baby,” was a favorite during his time here in Boston, playing a major role in the team’s Championship runs in ’08 and ’10.

Davis has since moved on, becoming arguably the best player on a rather unfortunate Orlando Magic team for a couple of seasons, and now keeping it real in Lob City with former Celts coach Doc Rivers and the Clippers.

Last night, in an attempt to be a hardwood hero as he has so many times before, Davis fell uncontrollably into a terrified pack of courtside viewers. One of these fans was a woman, probably a quarter of Davis’ size, who fell victim to a face full of Davis’ rotund backside.

The full video can be seen over at Deadspin, and it’s one of those clips that, despite what your conscience tells you, will probably be viewed at least a few times.

Basketball connoisseurs may recall that this isn’t the first occasion in which Big Baby has gotten a bit too excited with courtside fans. Who could forget Davis’s buzzer-beater against the Orlando Magic in Game 4 of the 2009 playoffs? After draining the game winner, the enormous Davis gave a nice love-shove to a young Orlando fan, spurring an unnecessary amount of controversy.

Or how about this Jeter-esque backflip that resulted in Davis’s foot connecting with a teenager’s face in Los Angeles? This fan was protected by barrier, too.

Just goes to show that years after his time in green, Glen Davis continues to leave it all on the court, even if that means getting physical with some directly off the court.

The Black and Gold continue their run tonight at TD Garden. END_OF_DOCUMENT_TOKEN_TO_BE_REPLACED

Who will make the Class of 2018? END_OF_DOCUMENT_TOKEN_TO_BE_REPLACED

It’s been awhile since we talked Black and Gold. END_OF_DOCUMENT_TOKEN_TO_BE_REPLACED

You’re going to wish you were in the Northern Alps. END_OF_DOCUMENT_TOKEN_TO_BE_REPLACED

END_OF_DOCUMENT_TOKEN_TO_BE_REPLACED

Bill might be “on to Tennessee,” but we’re not. END_OF_DOCUMENT_TOKEN_TO_BE_REPLACED