Why do Girl Scout Cookies Taste Better in Worcester Than in Boston?

Tuesday, March 10, is the last official day Girl Scouts will be out selling their ubiquitous cookies before hanging up their commerce sashes for the season, so you better hurry if you haven’t yet gotten your fix of Thin Mints and Caramel deLites. Or should I say Tagalongs? You’ve always heard rumors of “other” Girl Scout Cookies, some slightly altered cookies sold somewhere else in the US under different names. But you only need venture as far as Central Mass — or across the New Hampshire border — to find these oddities. And these “oddities” might be better than the Girl Scout Cookies you’ve always eaten.

The Los Angeles Times blew the whole case (of Thin Mints) wide open with its story on how different regional Girl Scout troop councils individually choose their cookie provider from one of two national bakers: ABC Bakers, which has made Girl Scout Cookies since 1937 and is headquartered in Richmond, VA; or Little Brownie Bakers, which has made them since 1974 and is based in Louisville, KY. In California, you can find Caramel deLites from ABC in Orange County and Tagalongs from LBB in Los Angeles a short drive away.

The same is true in Massachusetts, where troops under the Girl Scouts Council of Eastern Massachusetts get their cookies from ABC while the Council of Central and Western Massachusetts gets them from LBB. (You can search for where your town gets its cookies using the Times‘s interactive cookie map, but the divide is roughly along interstate 495.) New England is similarly divided, with Rhode Island and Maine going ABC and New Hampshire, Vermont, and Connecticut going LBB. 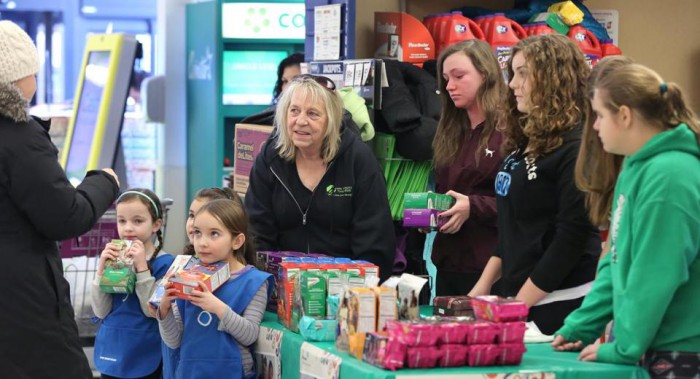 “We do re-evaluate our providers, every three years I believe,” Goldstein says. “Whenever we enter a long-term contract for significant money, we go through an RFP process.”

Besides the taste of the cookies, Goldstein says the council looks at factory quality standards and the kind of marketing and technology support the bakers can provide.

“ABC has been great for us,” Goldstein says. “They come in and meet with us every year to go over best practices and offer guidance. It’s a complicated business, from how the girls sell the cookies to how they’re delivered from the factories.”

The Girl Scout Cookie selling experience has changed as business has evolved. This year, the Scouts rolled out an experimental Cookie Finder app, and encouraged customers who were unsure of where to buy cookies to search by zip code on their website.

Goldstein also emphasized that one of the key factors when choosing the two is considering what’s best for the girls.

“For the girls, it’s a learning experience, Goldstein says. “They’re able to learn business skills, how to work with customers, money management, e-commerce — the whole cookie experience is teaching them skills.”

“So along with everything else we look for in a company, we also ask: What is the value the baker brings to the girls?” 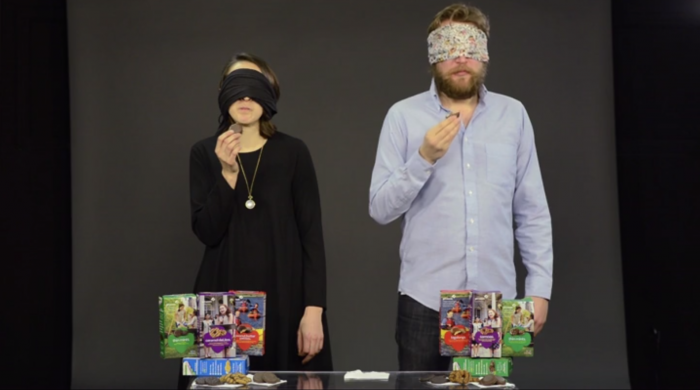 As wonderful as all of that is, the real question remains: Are the cookies I’m getting better or worse than those the other half of New England gets? The Times tried to quantify the differences between the cookies with a blind taste test, without ultimately choosing a winner.

But based on the short descriptions of each (ABC’s Peanut Butter Patties are described as having “a vanilla flavor, lighter peanut butter layer” and Tagalongs as having “more layers of peanut butter inside cookie”), it sounds like Little Brownie Bakers make the better-tasting cookie. CityLab did a rundown of each of the three major cookies and concluded that Little Brownie Bakers won in all three, saying “the ABC version’s flavor profile is just a jumble of euphemisms for ‘cheap.'”

In the interest of objectivity, we decided to do a taste test of our own. After assembling four boxes from each of the bakers (one set bought at the Porter Square T stop and one bought by an editor who went to New Hampshire this past weekend), we blindfolded pairs of Boston.com employees and let them voice their opinions.

With eight blind taste testers, Little Brownie Bakers won the taste test for each of the cookies tested. 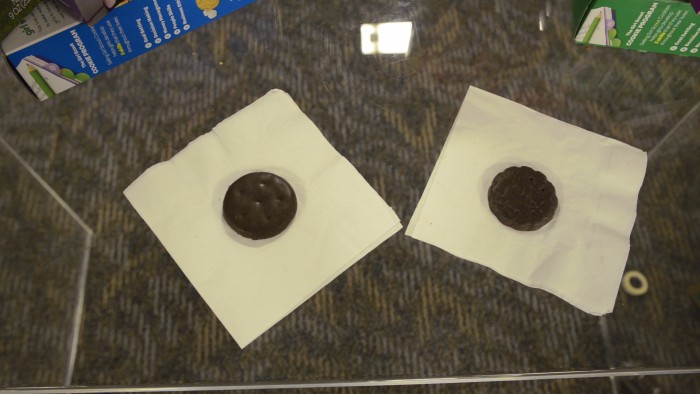 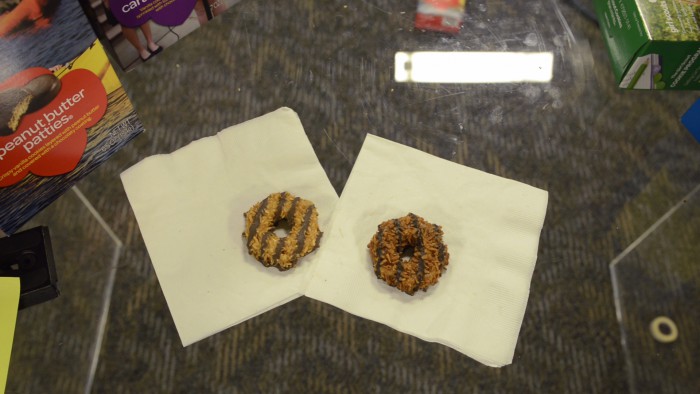 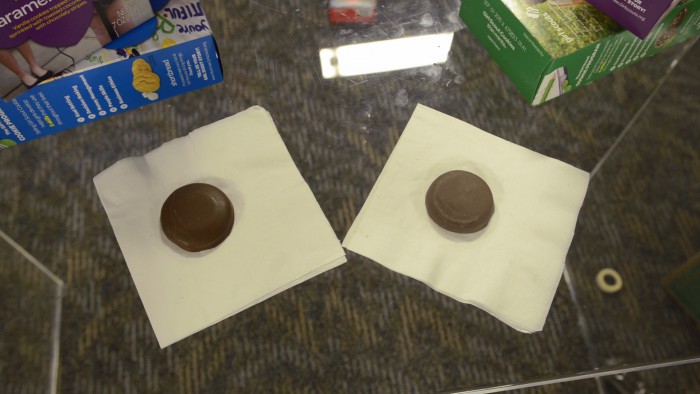 Hardly a scientific consensus, but a definite edge to the cookies Central and Western Mass get over the ones Bostonians buy — and a victory for sugar and fat, which Little Brownie Bakers tend to use a little more of across the board.

When asked whether the Girl Scouts of Eastern Mass had changed bakers at any point, Goldstein said that because the Eastern Mass Council formed as a result of three smaller chapters consolidating during the 2008 recession, historical records weren’t immediately available. But anecdotally, one of our writers who used to be a Girl Scout growing up on Cape Cod and several Boston-area residents only recall the cookie names synonymous with ABC, so it seems likely they’ve been providing cookies to Boston for awhile.

In the end, everyone agreed that all the cookies were delicious. But now that you know there are alternate, potentially more delicious cookies a mere 45 minutes away, it’s up to you to decide whether it’s worth crossing town (or state) borders to taste what you’ve been missing out on.

Enter to win a pair of tickets to attend The Hess Collection Seminar and Dinner as part of Boston Wine Festival 2018 at the Boston Harbor Hotel on Wednesday, March 14th. END_OF_DOCUMENT_TOKEN_TO_BE_REPLACED

Wednesday is Food Day, after all. END_OF_DOCUMENT_TOKEN_TO_BE_REPLACED

Amazing sandwiches for a good cause? Make a bunch for us! END_OF_DOCUMENT_TOKEN_TO_BE_REPLACED

And they came to our studios, too! END_OF_DOCUMENT_TOKEN_TO_BE_REPLACED

It’s almost time send off 2017 and welcome in 2018, and we have some ideas about how you can do precisely that. END_OF_DOCUMENT_TOKEN_TO_BE_REPLACED

The pics alone will make you want to make a reservation. END_OF_DOCUMENT_TOKEN_TO_BE_REPLACED

A decade of Wreck The Halls. END_OF_DOCUMENT_TOKEN_TO_BE_REPLACED

Some people love cooking for the holidays. Others, not so much. END_OF_DOCUMENT_TOKEN_TO_BE_REPLACED

There’s so many to keep track of, you might have missed this one. END_OF_DOCUMENT_TOKEN_TO_BE_REPLACED