Dan Schaumann has been a lot of places, seen a lot of faces, and used a lot of toilets. So many, in fact, that he started a blog, Toilography, to document his water closet excursions. And after a four-day trip to Boston last weekend, he’s shared some of the Boston area’s most interesting facilities.

I had a chance to catch up with Dan and talk about his toilet-themed travels, and check out his photos from The Beehive, Tasty Burger, and other cool area restaurants.

What is the coolest toilet you’ve ever seen on your journeys?

The coolest toilet I’ve seen was probably this one. It was at an art installation in regional NSW, Australia, called Utes In The Paddock, where a bunch of Holden utes (pickup trucks) were upturned, planted into the ground and creatively decorated. I visited a few years ago, and completely unexpectedly, one of the utes was made out to be Dame Edna Everage (a popular Australian personality) sitting on a ‘thunderbox’. I was super impressed. 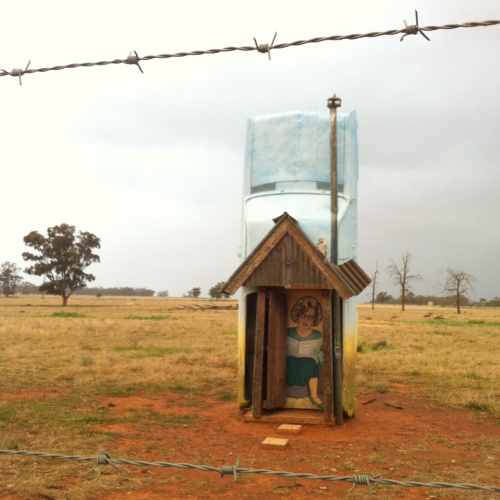 Your blog shows you’ve been quite a number of places. How do you manage so much travel?

I’m an Australian with a huge passion for travel. When I lived in Sydney I was able to travel domestically for work fairly often, and I tried to go on short vacations around Australia and throughout Asia as often as I could — whenever I came across an interesting toilet I’d document it on Instagram. I decided to move to Toronto last year, and similarly, I try to see as much of Ontario and the surrounding states as I can while also keeping an eye out for unique restrooms. I average a trip away every couple of months.

Have you ever planned a trip specifically because you heard about a cool toilet?

I visited a friend in Singapore last year and while I was there I took a day trip up to Kuala Lumpur in Malaysia specifically to see a toilet-themed eatery I’d heard about called T-Bowl Concept Restaurant. You sit on toilet seats, your food is served in little toilet bowls instead of plates and your table is a basin. It was incredibly surreal but well worth the trip. 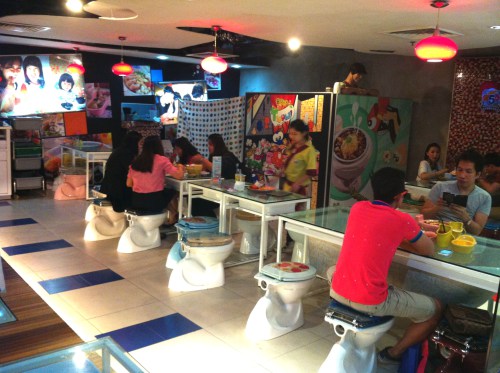 Anything you enjoyed about your trip to Boston beyond our toilets?

About a third of my time in Boston was devoted to checking out the toilets suggested by everyone on Reddit. It was a great way to see parts of the city I wouldn’t normally have seen, and I made a point of chatting to some locals and having a drink or a bite to eat at each of the venues I visited. The main reason I went to Boston was to see Fleetwood Mac, and aside from the toilets I also went on a Freedom Trail tour, walked around Harvard, visited the Peabody and Natural History museums, and the Mapparium (one of the most impressive attractions I’ve seen in a long time!) I had a drink at the Harpoon Brewery and I spent a fair amount of time outdoors in the Public Garden, Boston Common, and on the Waterfront.

Check out a few of Dan’s photos below, or visit his website for the full set. Did he miss any great porcelain thrones? Let us know in the comments.

Click here to see where we’ll be the rest of the season! END_OF_DOCUMENT_TOKEN_TO_BE_REPLACED

Enter to win a pair of tickets to attend The Hess Collection Seminar and Dinner as part of Boston Wine Festival 2018 at the Boston Harbor Hotel on Wednesday, March 14th. END_OF_DOCUMENT_TOKEN_TO_BE_REPLACED

This year, the festival is welcoming more female wine producers than ever before, making up 20% of all winemakers that will be at the festival. END_OF_DOCUMENT_TOKEN_TO_BE_REPLACED

We kicked off our 2018 season on the coldest day EVER. END_OF_DOCUMENT_TOKEN_TO_BE_REPLACED

The holidays are here, so raise a glass. END_OF_DOCUMENT_TOKEN_TO_BE_REPLACED

‘Tis the season to mix a nice, stiff drink. END_OF_DOCUMENT_TOKEN_TO_BE_REPLACED

Warm up with Tito’s on your sweater and Tito’s in your glass. END_OF_DOCUMENT_TOKEN_TO_BE_REPLACED

Our annual sushi celebration is fast becoming the social event of the season. END_OF_DOCUMENT_TOKEN_TO_BE_REPLACED