You’re probably well acquainted with the works of renowned Spanish artist Pablo Picasso, the painter and sculptor famous for works like “The Old Guitarist” and “Guernica.” But what have you heard about his lesser-known descendent Pawblo Picasso, the beloved pet portrait artist with a knack for capturing the personalities of animals in paint?

OK, so Pawblo Picasso isn’t a real person… at least, not in the sense that he was born in 1883 and earned his first exhibit at age 7 after painting the stray dogs of Malaga, Spain. Pawblo Picasso is the nom de paintbrush of Somerville’s Melissa King, an animal lover, art historian, and, yes, pet portrait artist – that part is true.

Pawblo was born five years ago, after King made a painting of her sister’s schnauzer, Peter, as a birthday present. (You may actually be familiar with Peter – with more than 8,000 followers, he’s certifiably Instagram famous.) When her sister loved the portrait, she realized that she might have a viable business idea on her hands.

“I just woke up one morning and I was like, ‘I bet other people would like this, would want to buy these portraits,’” King says.

She took to Facebook to ask her friends if they’d be interested, and the response was overwhelmingly positive. So she made another Facebook post asking what she should call her new venture. “People started going on this whole track of making artist pun names,” she recalls. “It was brilliant. There were other ones like ‘Vincent van Dogh’ and ‘Clawed Monet.’”

King settled on Pawblo Picasso both because she’d been to Picasso’s Malaga home in the past and still felt connected to his works, and because the name applied to a wider variety of animals than just cats or dogs. In the last five years, she’s been commissioned to paint a rooster, a chinchilla, several reptiles, a pair of parakeets, and a single bee in addition to cats and dogs. Altogether, she estimates that she’s completed more than 400 paintings – so many, in fact, that pet portraiture is now her primary source of income.

For her latest endeavor, King has partnered with the Animal Rescue League of Boston for a campaign called “Pawblo Picasso and the Calendar Factory.” Now through January 1, order a calendar from King’s website and you could find a golden ticket inside that entitles you to prizes including $250 worth of dog sitting courtesy of Rover.com or a three-month dog treat subscription from local company 2 Dogs Treats. Best of all, 15 percent of the proceeds raised from the campaign will go the Animal Rescue League. (“The more I learn about the organization the more I really love it,” King says.)

The philanthropic efforts, the live painting, and the general adorableness of her work – all of these factors have combined to make King’s portraits take off in a way she never expected when she first adopted the Pawblo Picasso persona. She’s shipped pet portraits as far away as Japan, and there are a handful of her paintings in Spain, the UK, Mexico, and Australia. She spent some time two years ago traveling down the California coast, painting at dog beaches and setting up her easel at San Francisco pet shops. Thanks in part to her Facebook and Instagram presence (which rivals that of Peter the schnauzer), Pawblo Picasso’s pet portraits have gone global.

Still, you can often catch Pawblo right here in Boston, live painting pups at the SoWa Open Market, on Newbury Street, or in dog parks around town. In fact, King’s artwork has made her something of a minor celebrity here in the city, as evidenced by a recent encounter she had while live painting some pets at the Arnold Arboretum.

“I saw a park ranger pull up next to me, and I thought she was going to yell at me. But she asked if I was Pawblo Picasso!” King says, laughing. “That was a nice surprise.” 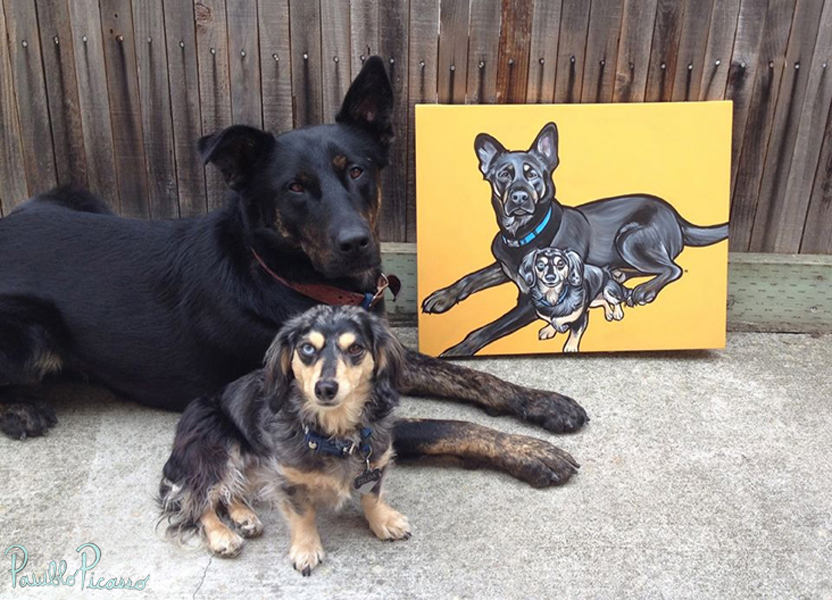 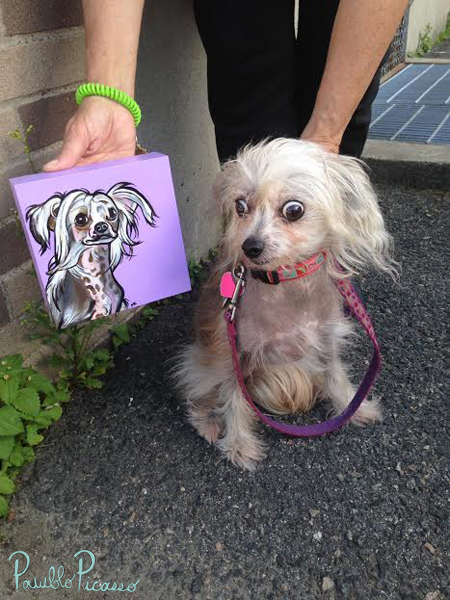 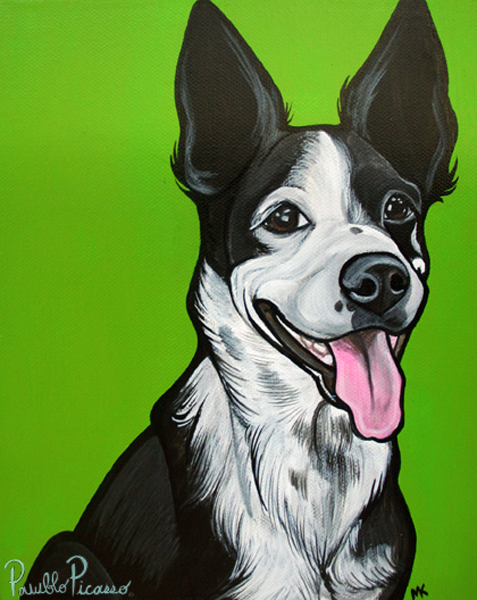 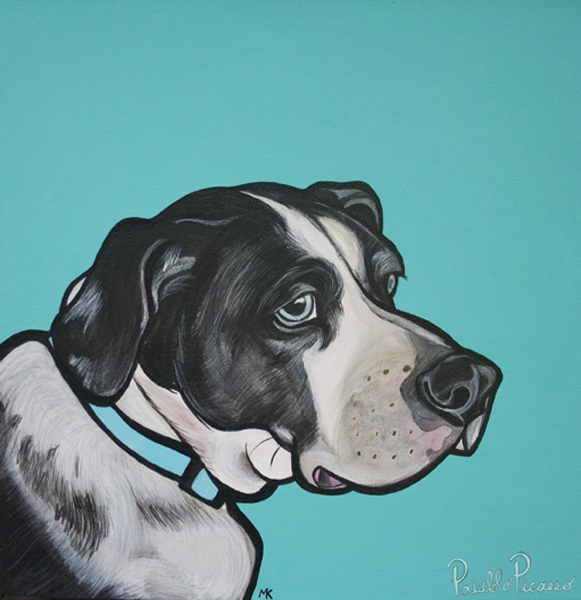 Enter to win a pair of tickets to attend The Hess Collection Seminar and Dinner as part of Boston Wine Festival 2018 at the Boston Harbor Hotel on Wednesday, March 14th. END_OF_DOCUMENT_TOKEN_TO_BE_REPLACED

Artists for Humanity Co-founder Jason Talbot and Major Gifts Director Emily Smaldon were in studio this morning with Mallory Bazinet, Event Manager for GrandTen Distilling. Jason and Mallory talked about The Contemporaries, their upcoming event to launch a new patron group for young professionals. Click here to join them on Thursday, August 17! END_OF_DOCUMENT_TOKEN_TO_BE_REPLACED

Aida Villarreal-Licona is the Events Coordinator for SoWa Boston’s Art & Design District. She was in today to talk about their holiday shopping event this Thursday December 15 from 4-8 p.m. at 450 Harrison Avenue. A great opportunity to help local artists and get some holiday shopping done! END_OF_DOCUMENT_TOKEN_TO_BE_REPLACED

Natalie Lemle was in to talk about ArtLifting, a program that aids homeless and disabled artists. Currently, 72 artists in 11 states are receiving 55% of all profits from your purchase of their artwork and photography. Click “more” to hear my chat with Natalie and to see work from one of the artists. END_OF_DOCUMENT_TOKEN_TO_BE_REPLACED

Lee Domaszowec from the Petco Foundation and Rebecca Baylies, Director of Development and Communications at Cape Ann Animal Aid, joined me to talk about Unleashed by Petco’s upcoming series of adoption events. They’ll be held at Brattle Square, Boston Common, and several adoption shelters throughout Massachusetts. Listen to get all the details! END_OF_DOCUMENT_TOKEN_TO_BE_REPLACED

Boston band Funeral Advantage is Tyler Kershaw. And Tyler Kershaw had a fun childhood, so it seems. END_OF_DOCUMENT_TOKEN_TO_BE_REPLACED

Perry put me on to daephne and the album blew my mind. END_OF_DOCUMENT_TOKEN_TO_BE_REPLACED

It’s no secret that Bostonians like to show their Patriot pride with tattoos. Who can forget the awesome guy who got that sweet Bill Belichick arm tattoo? Or the less-awesome guy who showed off his full-head Tom Brady helmet tattoo in his mugshot? END_OF_DOCUMENT_TOKEN_TO_BE_REPLACED