This past weekend was the first annual Boston Zine Fest. The two day event was a celebration of zines, do-it-yourself culture and self-publishing. The first day featured workshops, zine readings and a movie night at the Washington Art Center in Somerville. Day two was at Aeronaut Brewing Company, also in Somerville. Artists from all over the country displayed and sold their zines and drawings. The Boston Zine Fest was organized by a collective made up of Sara Bear, Sylvia Kim, Peter Loftus, Brittany Mitchell and Sarah Rugiero.

We also got a chance to talk to some of the artists plying their wares about why they do what they do and why Zine culture is still relevant. 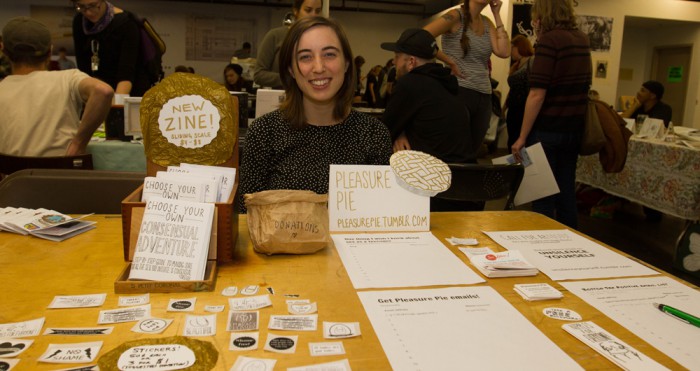 “‘Pleasure Pie‘ is where I made all sorts of sex positive materials to kind of leave people with messages that would have been really helpful in my life. It is obviously open to anyone, but I often make things with the idea of younger people, maybe teenagers, using these materials. [I] talk about consent, talk about birth control options, body positivity and thinking about sex without it having to be a shameful thing. That’s a lot of what ‘Pleasure Pie’ is supposed to be about.”

“To me it seems just like any other type of art and is important to people. I kind of feel like part of it is how fun it can be to make.” 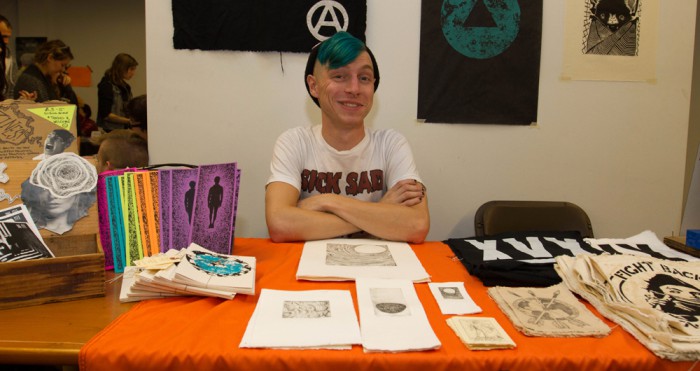 “The first one is ‘Ink Marks,’ I made it to go along with the [silk screening] workshop I taught yesterday … I thought it was important to spread that knowledge, that’s why I started doing the workshop and doing that zine. Now I’m really into it because it was so fun. So now I’m going to do other printing processes like linoleum cuts and an update on the screen printing.

The second zine is ‘Nine’ and I wrote it more for myself and its about my experiences with depression and suicide and I how I’ve been dealing with that basically for the past 18 years. It’s things I have found helpful in dealing with those [feelings] … Initially I set it out as a way to have that conversation because I’ve never really had that conversation with anybody … I thought that, yes, it was important for me to get that out there and talk about it, but I know that growing up dealing with it the few times I had a chance to connect to someone who was going through something similar made a world of difference. Like it completely changed my life. I thought that putting out my own experiences could maybe help connect with other  people who feel isolated, or maybe who don’t have someone they necessarily feel they can talk to. In all my zines I put my contact info because I want people to contact me if they feel something is problematic or they just need someone to talk to or in the case of screen printing – if they need help.”

“Having things in print helps it connect with the human aspect of it much more. If you see things on the Internet and, yeah you can read it and be totally into it , but it doesn’t have the presence as something in print does. Even if you made a physical copy and scanned it and then posted it online, it still doesn’t have that immediacy and feeling of hand craft that’s present in a hand-made zine. There is something precious about holding something that was made by another human being, especially something that’s so personal. You’re entering their world.” 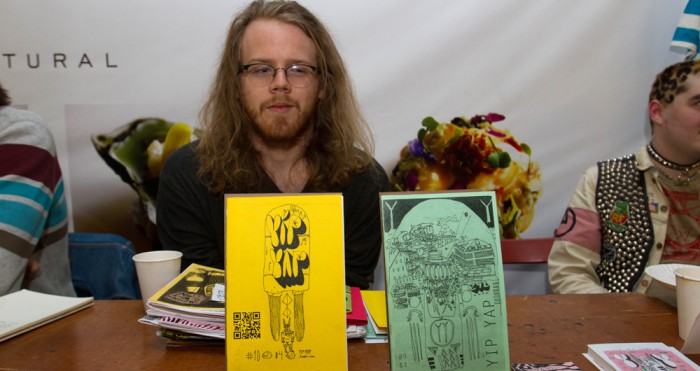 “Yip Yap is from a daily sketchbook I have, it’s just stream of consciousness and it’s more therapeutic for me to do and essentially I’d have to show it to someone eventually I guess.”

“I still enjoy flipping through stuff. I feel like printed matter is more a niche kind of thing. People are always handing something like [a zine] out.” 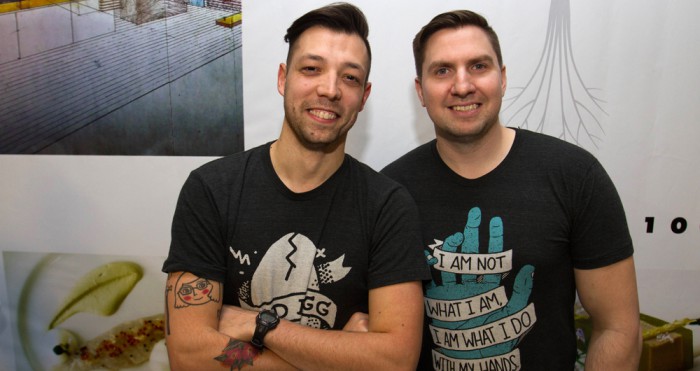 Josh: “I run a zine subscription, I’ve been doing it for two years and it’s basically a way to be in charge of something from start to finish to printing it and sending it to someone. I’m really psyched on the  idea of making something physical and giving it to someone or selling it. A lot of it deals with food, they all attempt to be humorous.”

Chris: “I’ve been posting daily drawings since 2007 and I just post them on my website, and since I have all these drawings it’s always fun to just put them together in little collections. I have a graphic design background so putting things together and making stuff is really fun.”

Chris: “I don’t know about other people, but personally I like getting [zines], I like flipping through them. I still like magazines, I think it’s fun to get something you can hold on to, something substantive and on paper. It’s cool to interact with it instead of looking at it on a screen.”

Josh: “I mean I love screens, but I also love to touch real things. It’s just something I know someone else made that I’m looking at. Someone else used their hands to make it and that’s rad.” 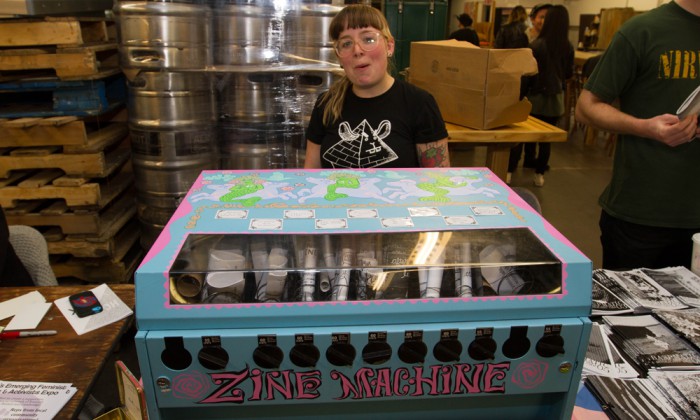 Tell us about the zine vending machine:

“I got vending machines about a year and half ago. I got a sticker vending machine that used to vend poetry. This year I thought I’d do it a little bigger and do an actual pamphlet vending machine for a low low price. I like the idea of cheap, interactive, accessible art, which I got into zine culture in the first place. It’s really fun to have ideas and be a person and be creative and to share them with other people that are having ideas and being a person and being creative. Part of the creative process for a lot of people I feel like is a tactile feeling experience. Reading shit on Tumblr all day is really boring and makes you feel weird and zines make me feel good weird and not like Livejournal, Tumblr bad weird.”

END_OF_DOCUMENT_TOKEN_TO_BE_REPLACED

Enter to win a pair of tickets to attend The Hess Collection Seminar and Dinner as part of Boston Wine Festival 2018 at the Boston Harbor Hotel on Wednesday, March 14th. END_OF_DOCUMENT_TOKEN_TO_BE_REPLACED

I referred to it as the “best kept secret” in Boston arts for the holidays. END_OF_DOCUMENT_TOKEN_TO_BE_REPLACED

Boston’s arts scene shines at this time of year. END_OF_DOCUMENT_TOKEN_TO_BE_REPLACED

It’s so much more than a holiday show. END_OF_DOCUMENT_TOKEN_TO_BE_REPLACED

Rock for a cause this holiday season. END_OF_DOCUMENT_TOKEN_TO_BE_REPLACED

Get out and see a show this holiday season, and save some money when you do. END_OF_DOCUMENT_TOKEN_TO_BE_REPLACED

You can help give the gift of music to kids in need this holiday season. END_OF_DOCUMENT_TOKEN_TO_BE_REPLACED

Be honest: when’s the last time you attended a Gala? END_OF_DOCUMENT_TOKEN_TO_BE_REPLACED

The October staple returns on the 21st. END_OF_DOCUMENT_TOKEN_TO_BE_REPLACED